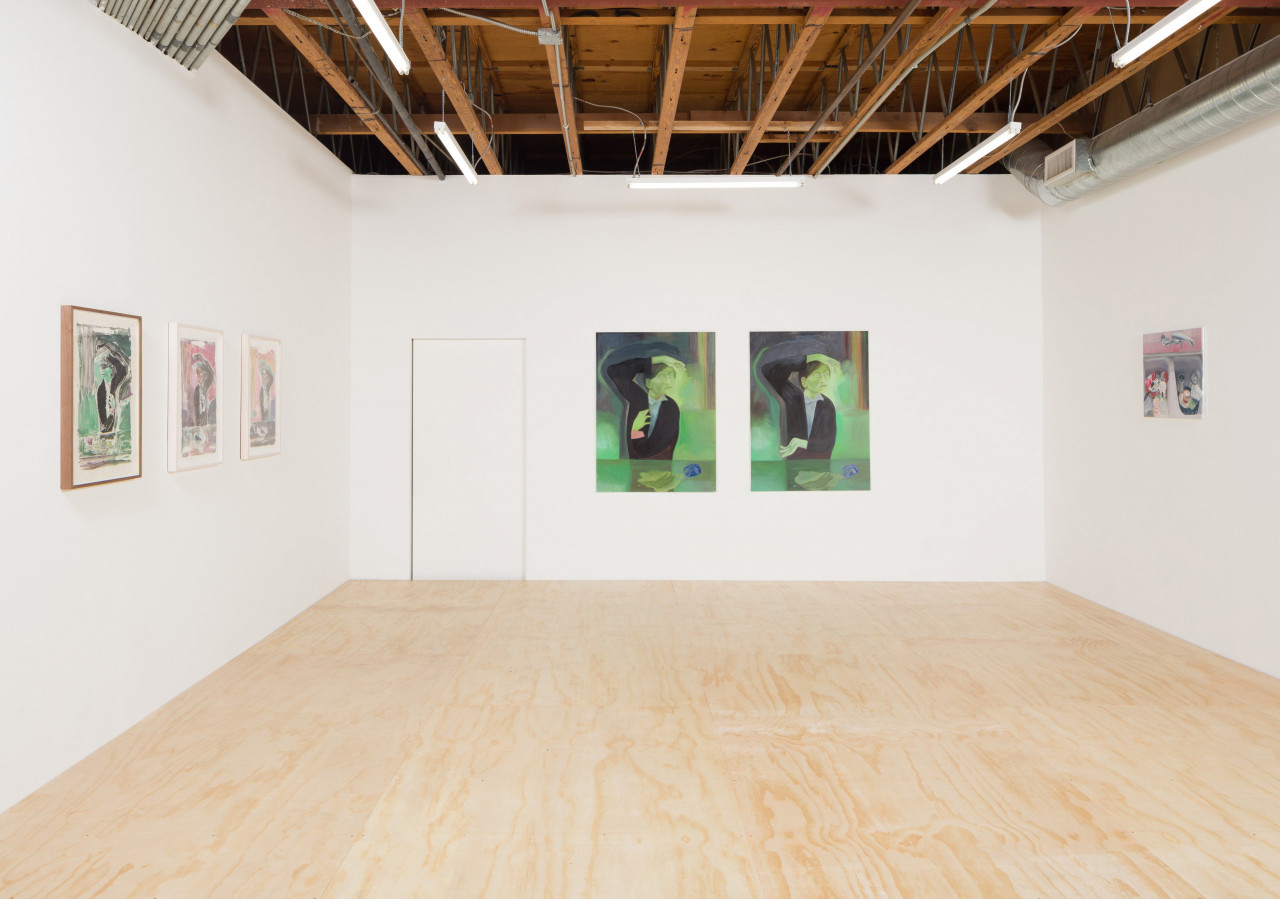 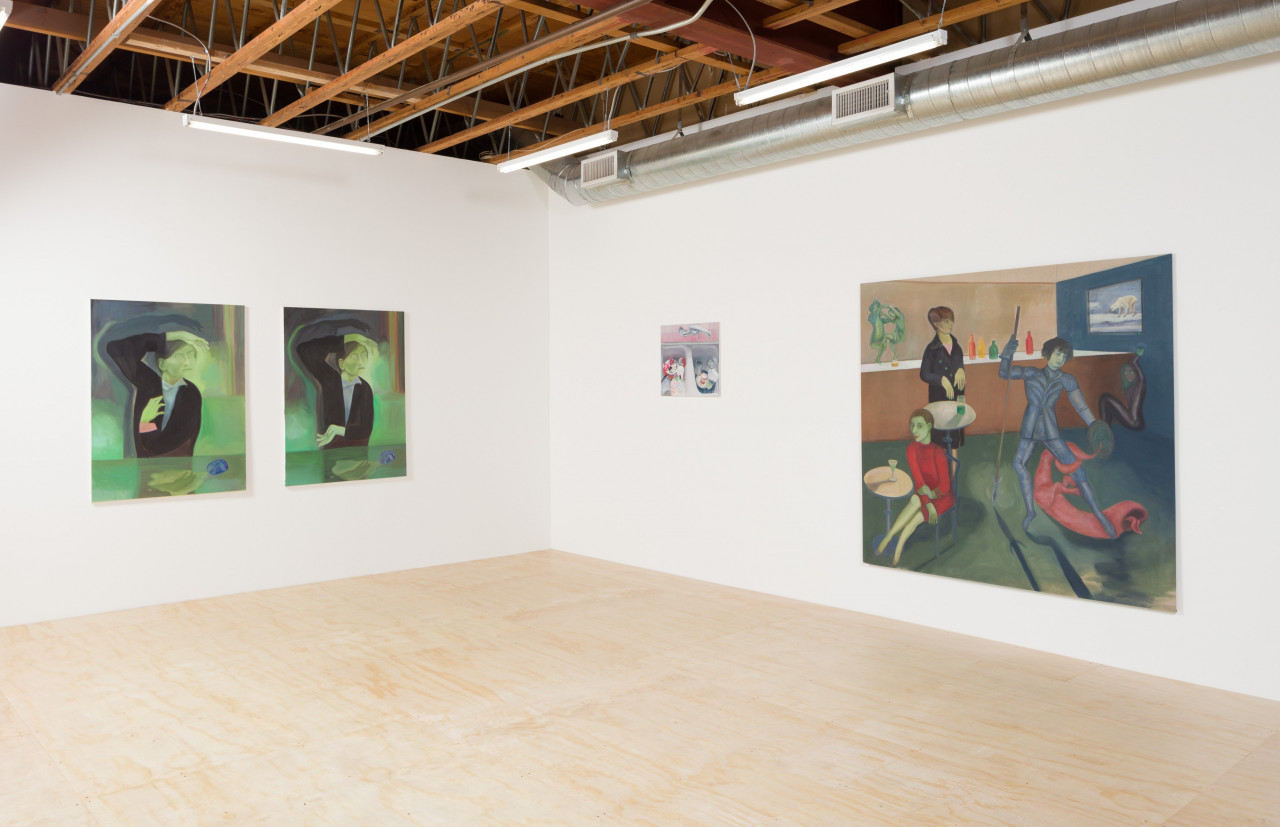 Extreme bodily postures recall Fifteenth Century paintings depicting the “extraction of the stone of madness,” a hypothetical procedure involving trepanation and the removal of a stone thought to be the cause or seed of a patient’s insanity. This lone figure could otherwise be a sort of Artaud practicing Balinese theater in a green barroom. Doubled, tripled painting is a space for unhinged limbs and their shadows caught in the reflecting pool of a spilled drink. A composition in green, iconic as a playing card.

A sun for the sleepers, I, II, III

The green man returns as a woodcut made from an old kitchen cutting board found in the artist’s garage. Harsh, acid colors were quickly brushed all over the carved woodblock, then stamped onto sheets of Japanese rice paper. This series of prints flips the figure right to left while simplifying and primitivizing its form in gouges and roughly sliced lines. The painting is becoming machinic in this fast, repeating work.

A domestic still life depicting a kitchen sink full of unwashed dishes. It’s also a sort of self-portrait: the distorted image of the artist can be seen reflected and multiplied in the sink’s chromed hardware. Gazing down upon this banal scene as if surveying a disaster area, this could be a chance to lose oneself in hypnotic tasks or to make a painting instead. Chaos is a little homemaker and the artist puts the viewer in her place.
52h x 57w cm 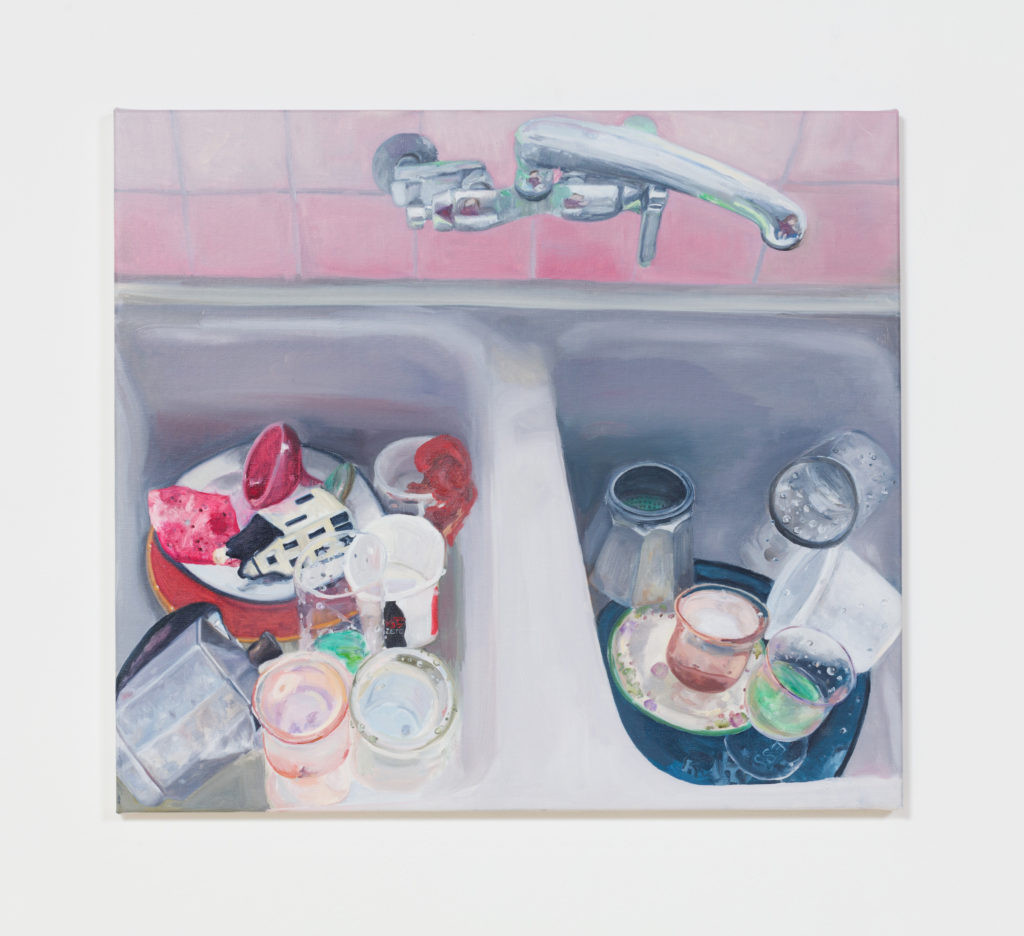 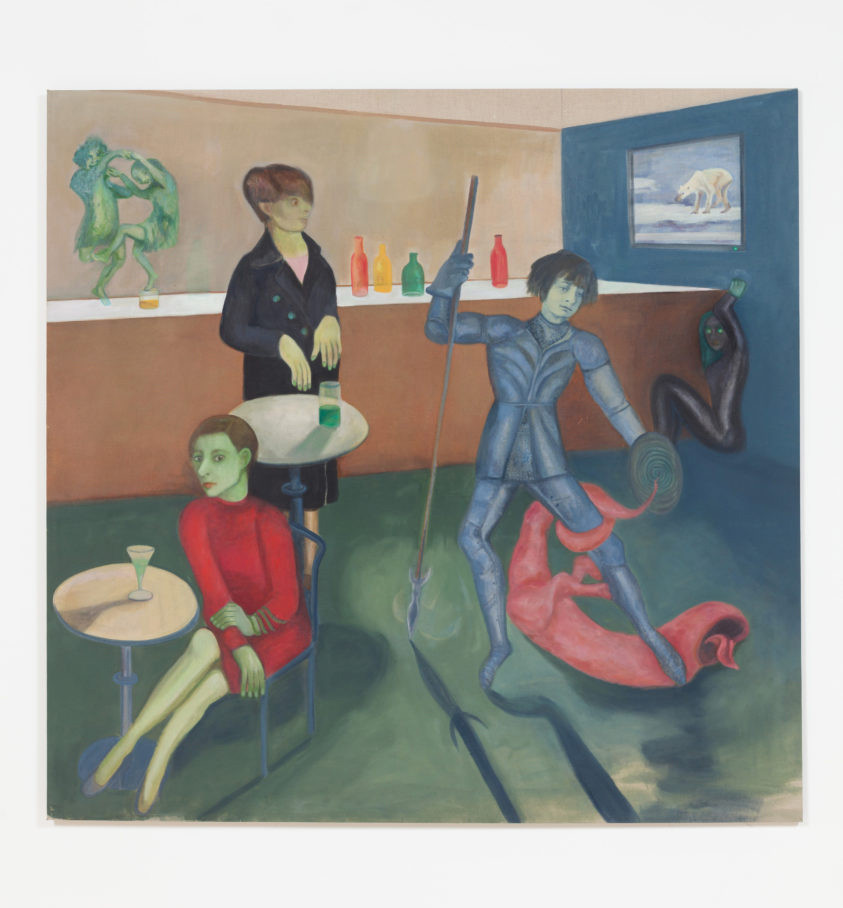 The green barmaid wields between her fingertips tiny pills, one in each hand, blue & red as if performing a diabolical magic trick with roofies or offering the viewer two different possible destinies. Is something missing or about to appear? Her shadow holds a pistol that’s nowhere else in the scene. Empty bottles decorate the foreground, one red, one blue, one green, as if this composition in three colors were a kind of Tarot or shell game presented to the viewer. 122h x 91w cm

A large bar scene seems to borrow female figures from different centuries and realities. A Joan of Arc figure prepares to slay a toothless sausa- ge-shaped Satan on the floor. One woman passively looks on as another, dressed in red, stares at the viewer. Is that Melania Trump in the skin-tight cat suit, chained to the bar beneath a TV broadcasting an image of a starving polar bear. 165h x 171w cm

The fight was fixed

More extreme poses with an attacking coyote balanced upon a police- man’s nightstick. The cop seems hypnotized by the spectacle of his own flesh being devoured. Other denim-clad, empty-handed men clutter this dreamy 2017 street fight scene. The flat yellow floor divides the space in two while the raw linen background becomes an almost painted surface. 165h x 126w cm

An androgynous Apollonian figure makes a sort of topless hieroglyph in the curved space of yet another barroom. Reflected in a starry, nighttime mirror, Prince S meets the viewer’s gaze twice – painted in cold colors and smoking a recently legalized Californian joint. In the background, a cluster of anonymous Dionysian red figures reenacts a sex dream party in a painting that measures. 165h x 126w cm. 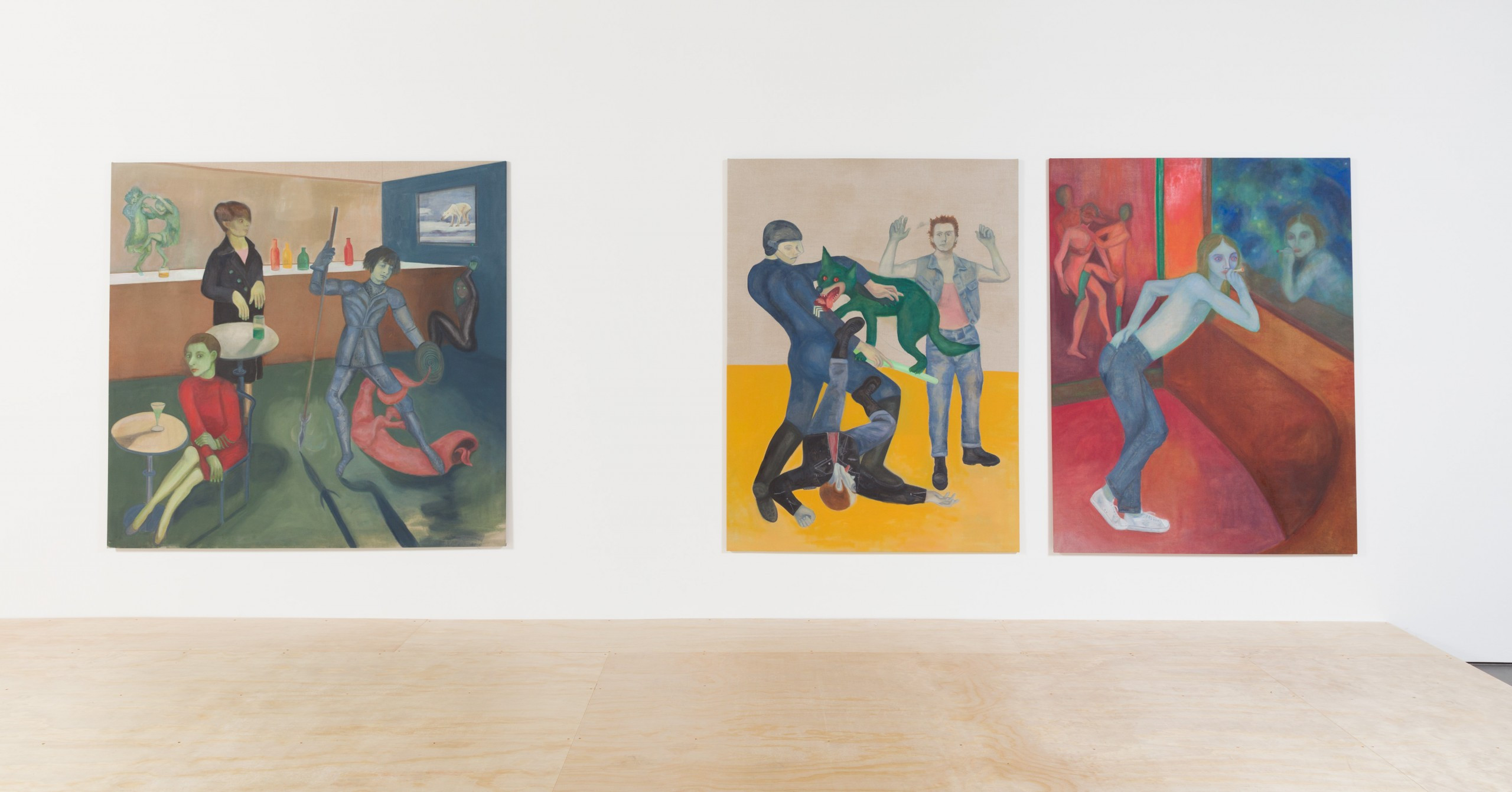 Made in the shade

Based on a photograph of Martin Kippenberger and company sitting in a bar in Dawson City circa 1995. Other figures and details have been removed from this memory but a cheetah has been added. The seated cat shows off her spots, transfixed by a CCTV view of the actual parking lot outside Freedman Fitzpatrick.

A starscape hallucinating mythical figures within a doubled, possibly made-up constellation at night. A double-archer seems to take aim at a flying snake. A trio of green, disembodied hands are communicating nearby, portending or jut playing? This is a painting and a map for relocating oneself within an imaginary or improvised cosmos. Momentarily aligned and suspended on the canvas, moments of painting seem to spell out a sort of wordless, still unresolved rebus or narrative. 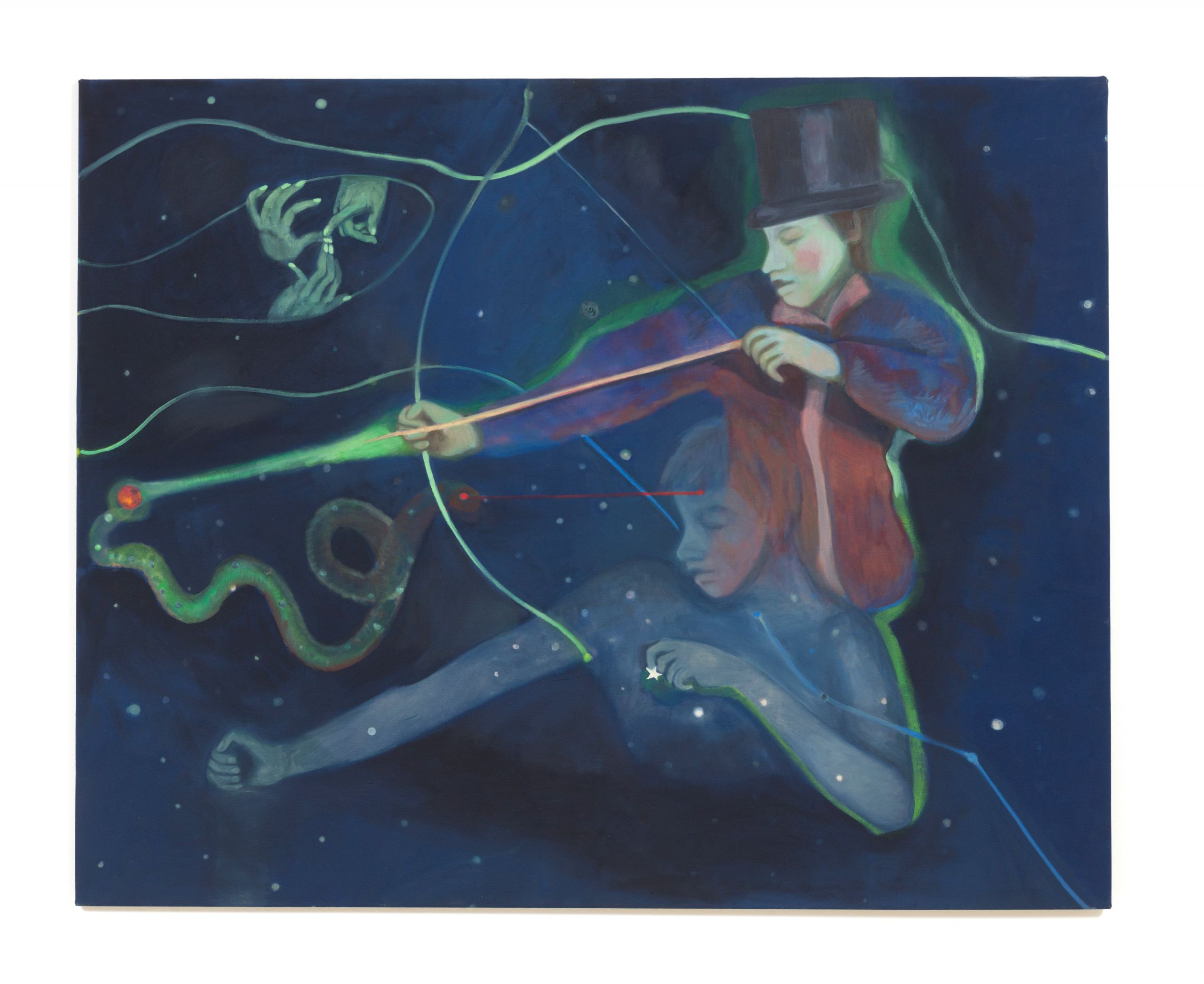 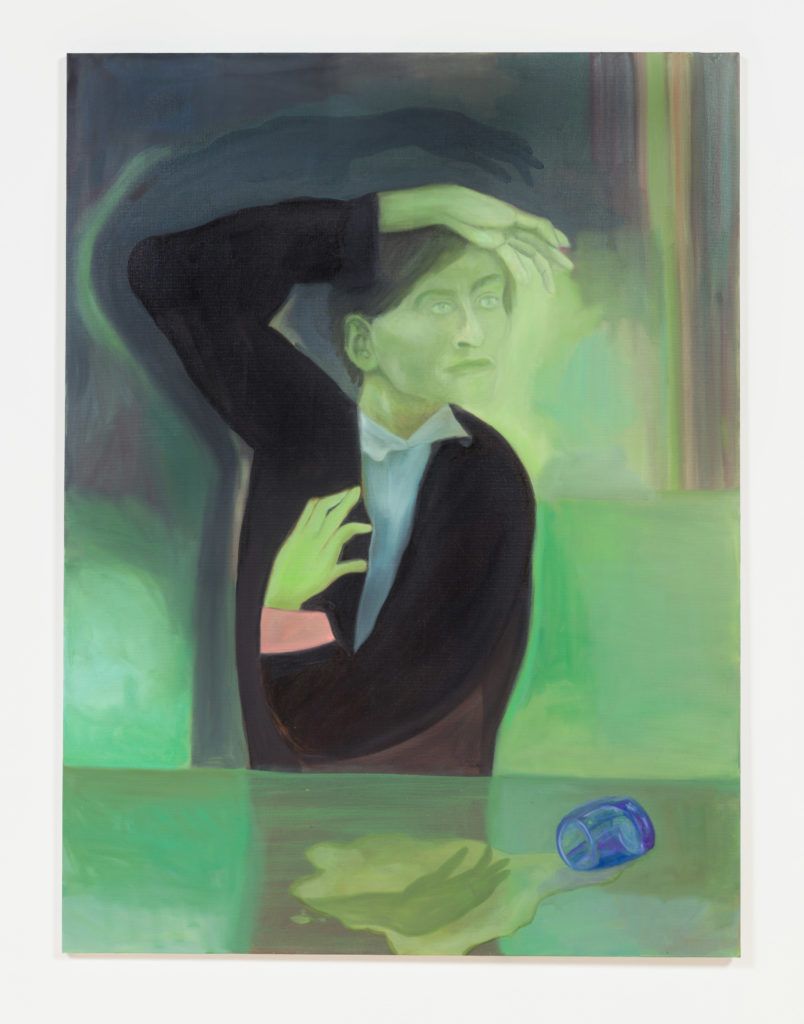 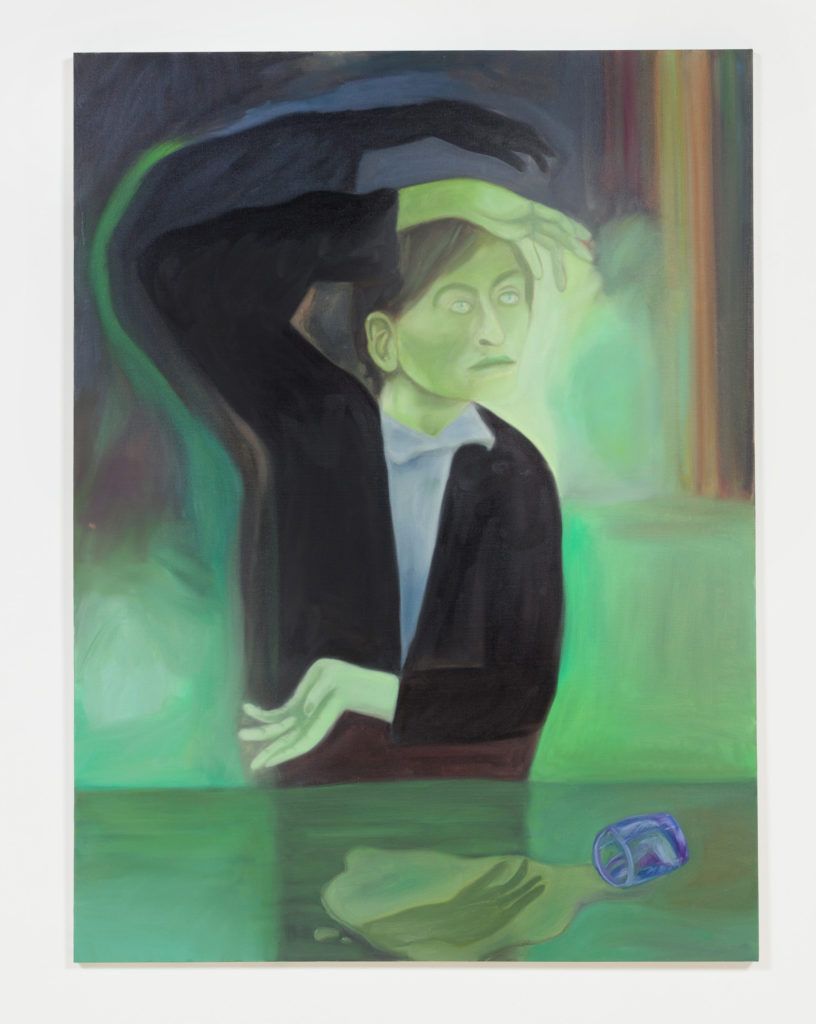 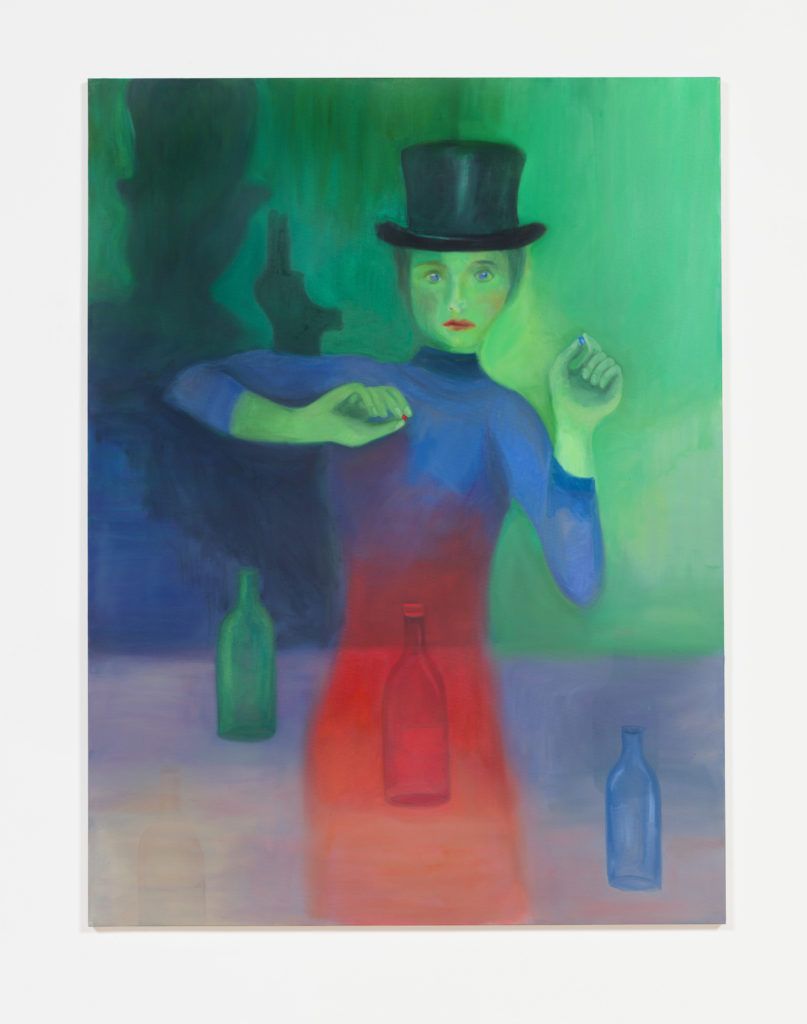 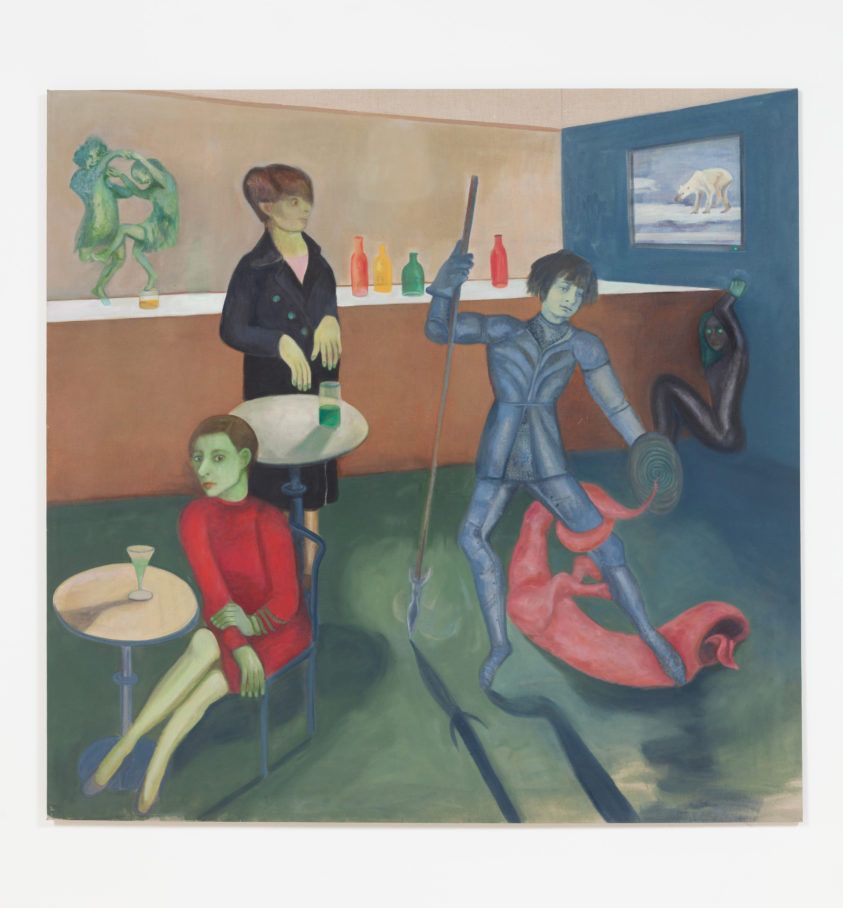 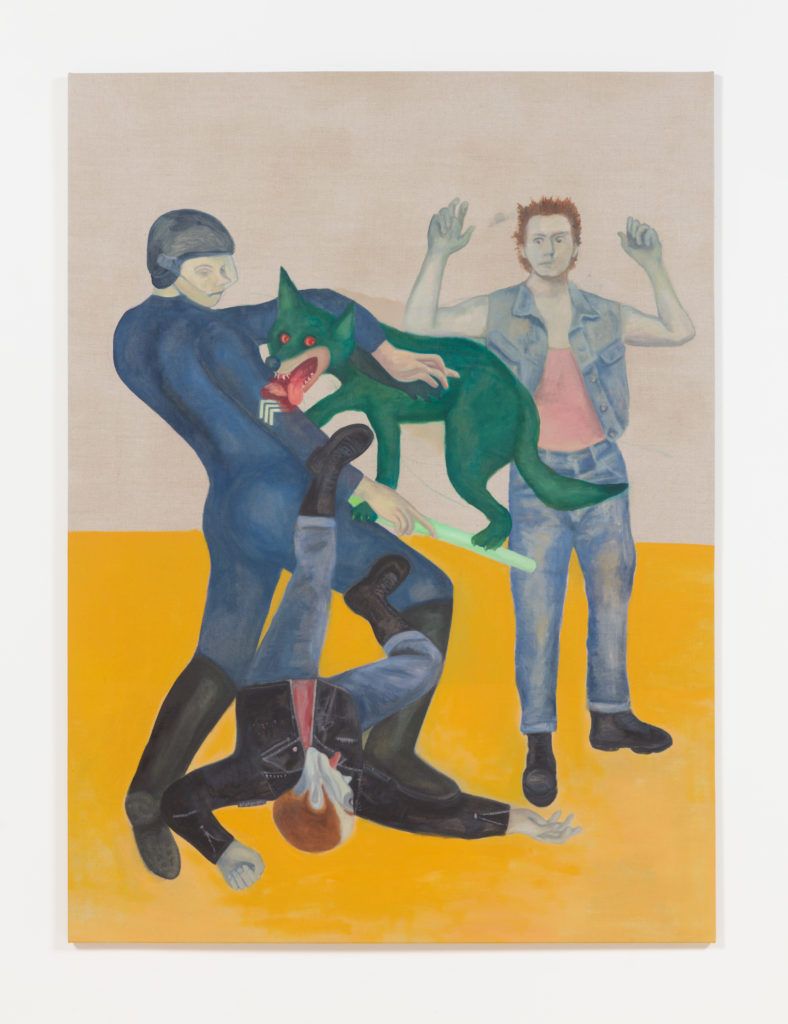 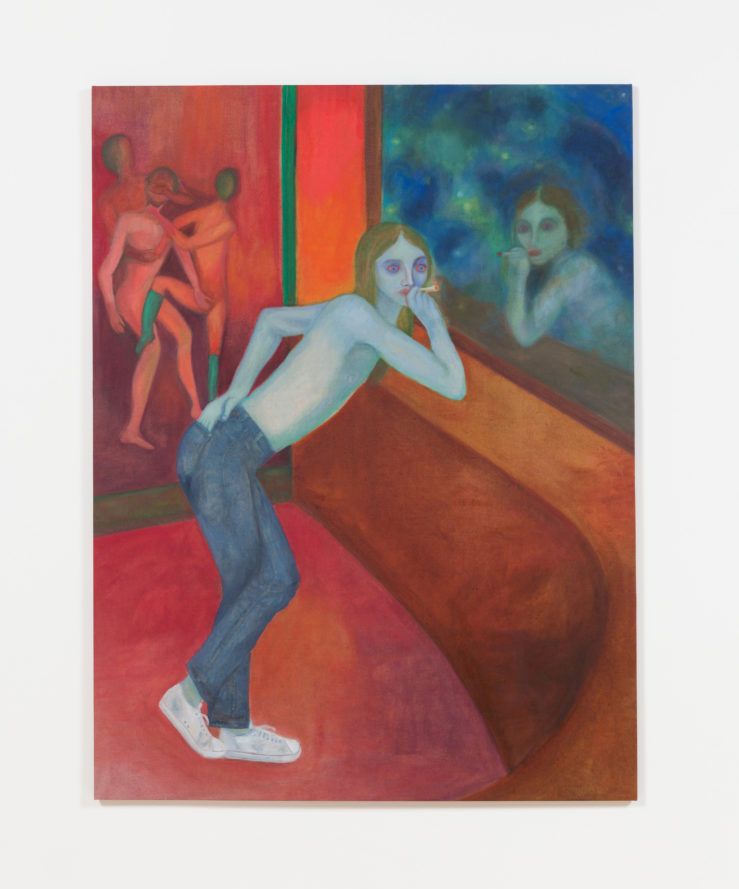 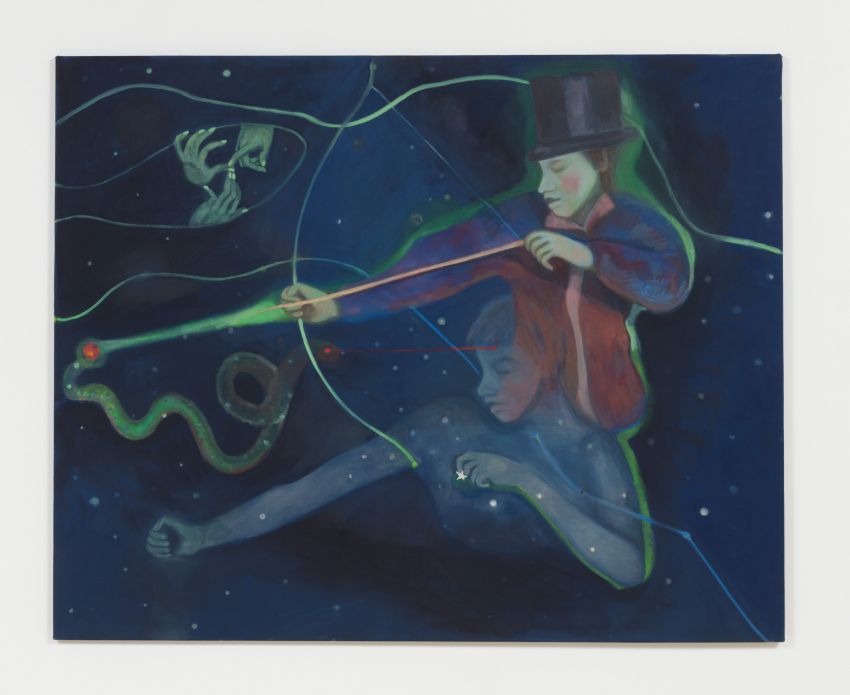 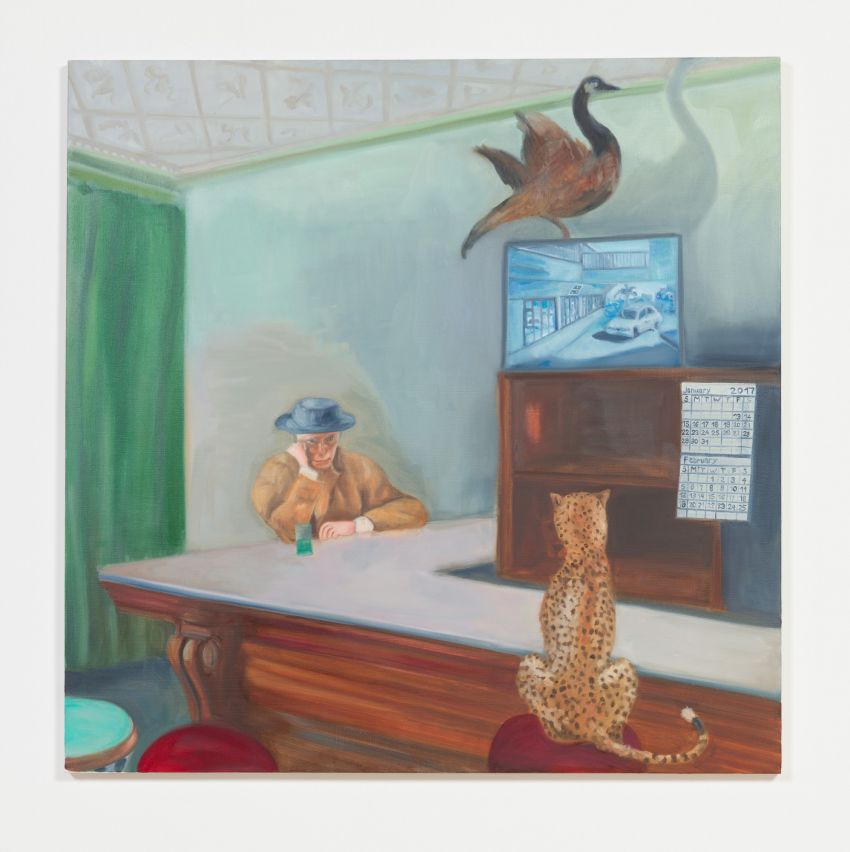 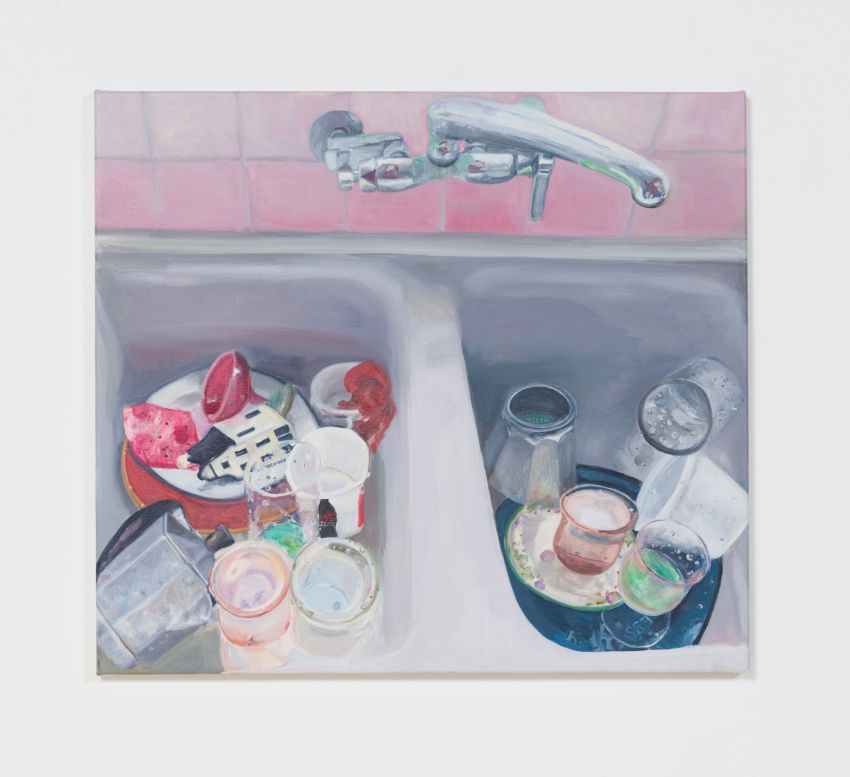