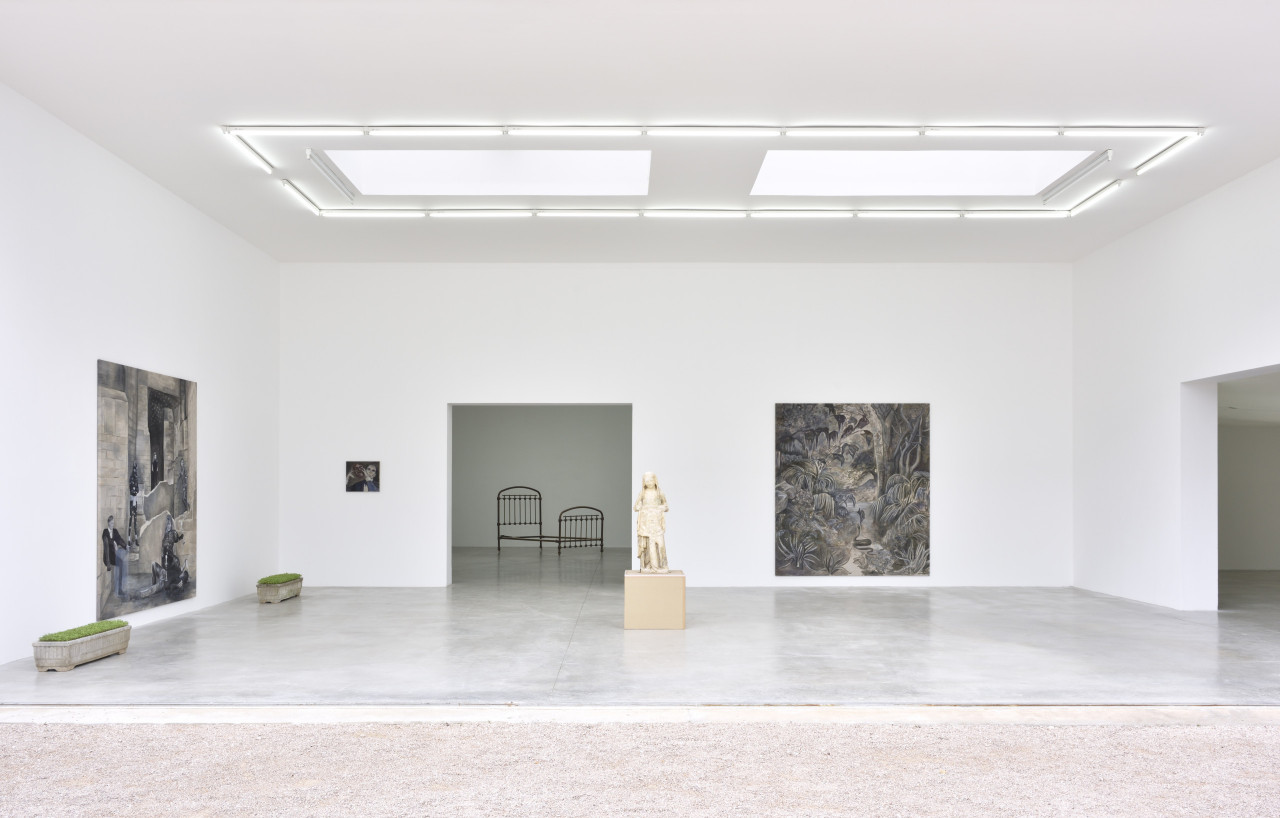 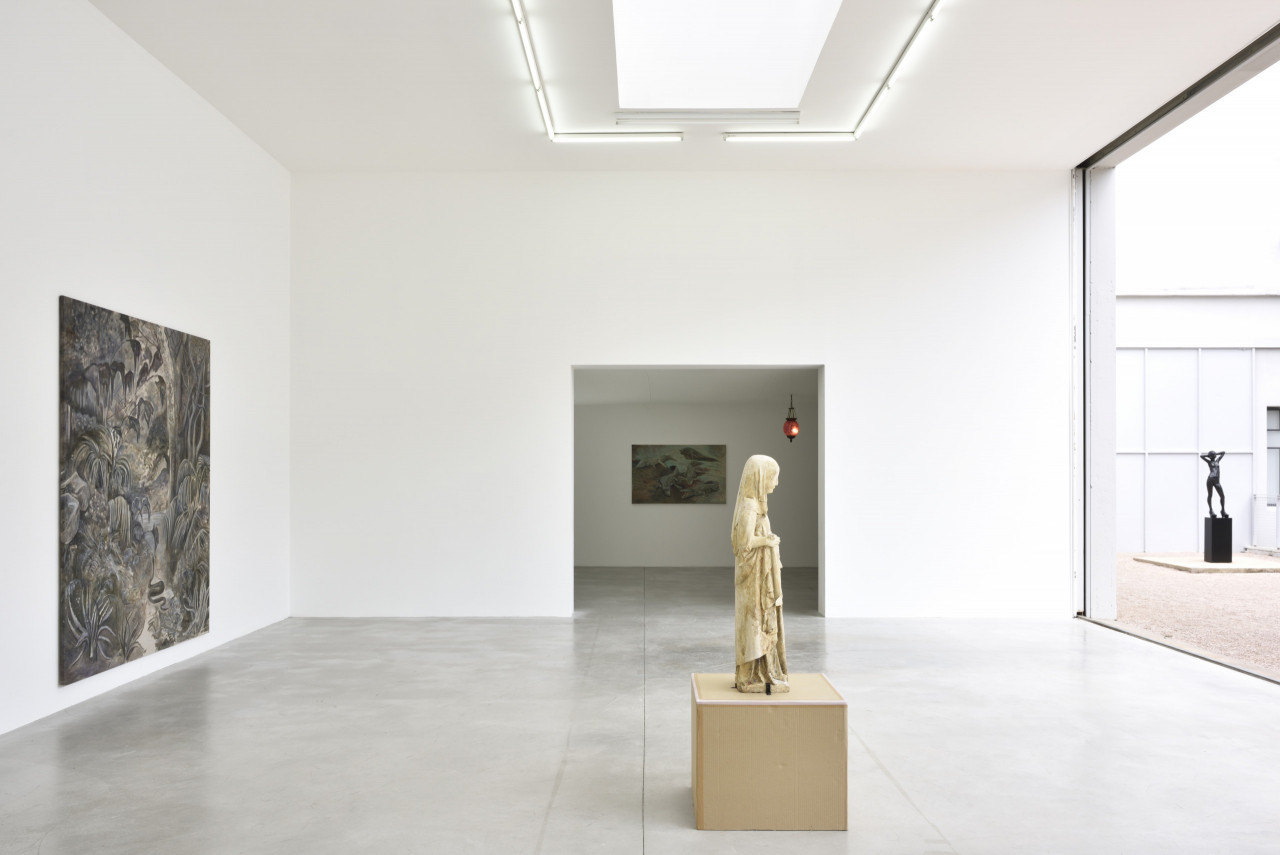 Blood Fog, Jill Mulleady’s exhibition at the Consortium Museum, does not deprive to make use of any subterfuge, any camouflage as it charts its singular course. Scene after scene, room after room, paintings and objects carefully selected by the artist reveal the ruins of a civilization already consumed––an imaginary world blown to pieces.

The story is already in motion as a pair of painted eyes – an artifact from a looted Egyptian sarcophagus, replicated by the artist – fixes you with the otherness of a (fe)male gaze… and the remoteness of an immemorial but now lost Antiquity.

Alongside this gaze, the painting of a cobra hypnotizes the spectator with an irresolvable ambiguity: the threat of fatal intoxication or a promise of protection. We have no choice.

In the corridor, like an antechamber, a Baccarat lamp snatched either from a brothel or a comfortable bourgeois interior (is there any difference?), illuminates a new series of paintings. Its red glow is reflected in the painted mirror placed at the end of the room, inviting viewers to double themselves too – as if in a story by Pierre Klossowski – and to mingle with sinuous, painted bodies.

Life in the garrison towns of the East, life in the trading towns of the Southwest, life in the port towns of the English Channel, life in new white and blue seaside towns, life for the benefit of an always deferred hope, burning life that smolders in silvery taffetas, life sitting on comfortably soft upholstery… All these lives are also my own as a spectator today.

The paintings show languid bodies in domestic or outdoor settings. Liquid, transparent color is applied on raw linen canvas – the medium of the Moderns. Tilted faces lean on long and idle hands, à la Cocteau––he who kept his jacket sleeves unbuttoned on purpose.

Echoing the paintings, constellations of found and made objects.

Here, as if pulled from one of the canvases, placed at an angle, the iron frame of a vaguely Napoleon III-style bed has been sprinkled with coarse grey salt… to neutralize the spells that fellow vampires of Mulleady’s generation would not have failed to cast. A dueling pistol has been forgotten on the edge of the bed frame. How many lead bullets has it shot through the skin of unlucky losers?

There, two rough cement planters have been sown with growing mustard seeds which will bloom with yellow flowers during the course of the exhibition. 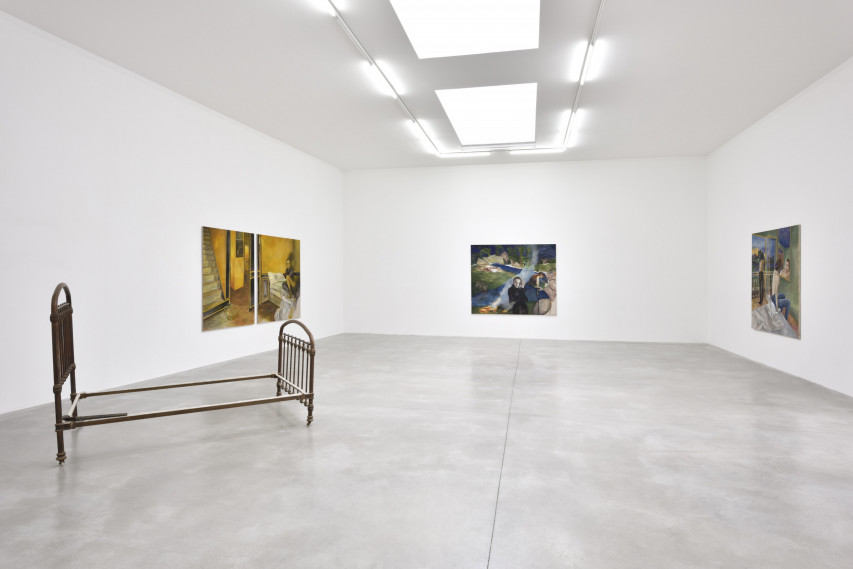 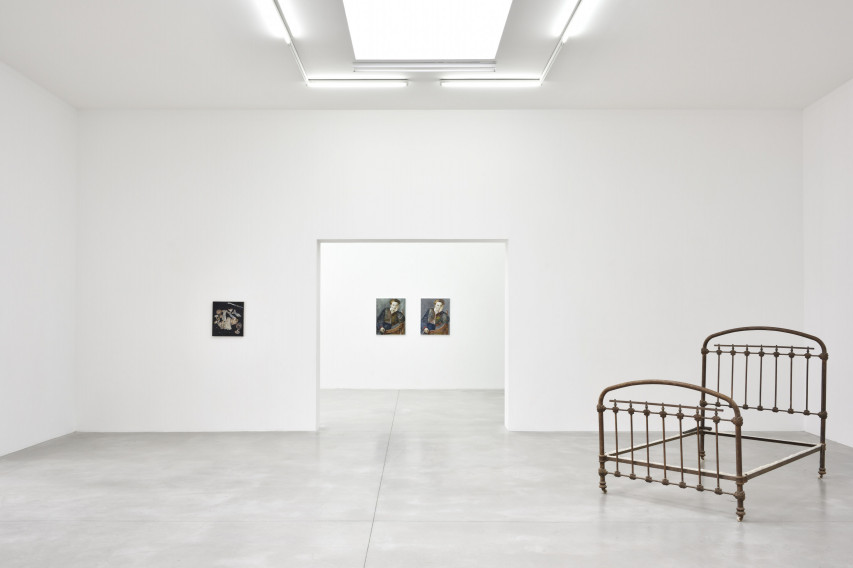 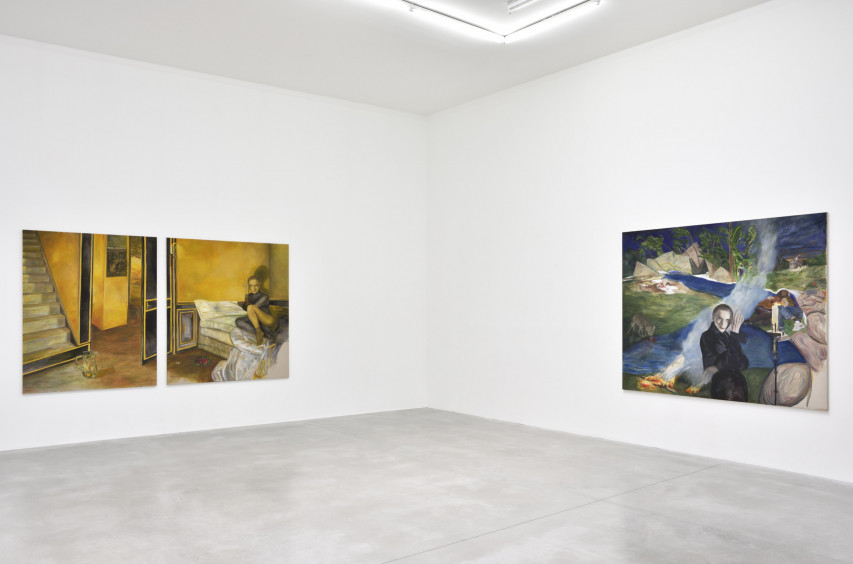 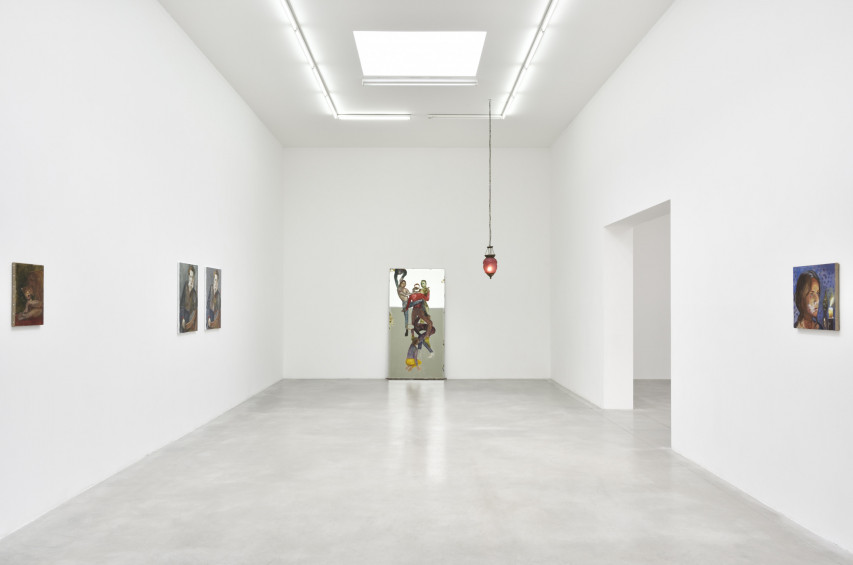 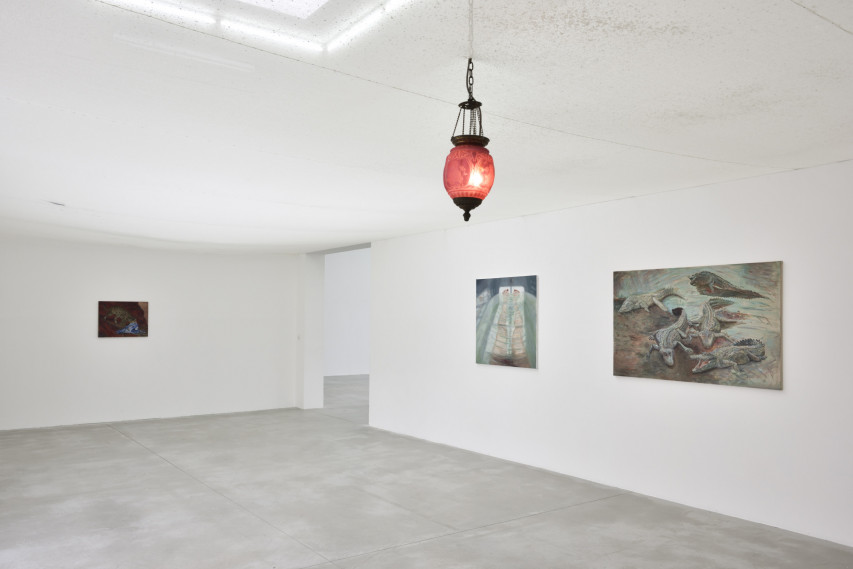 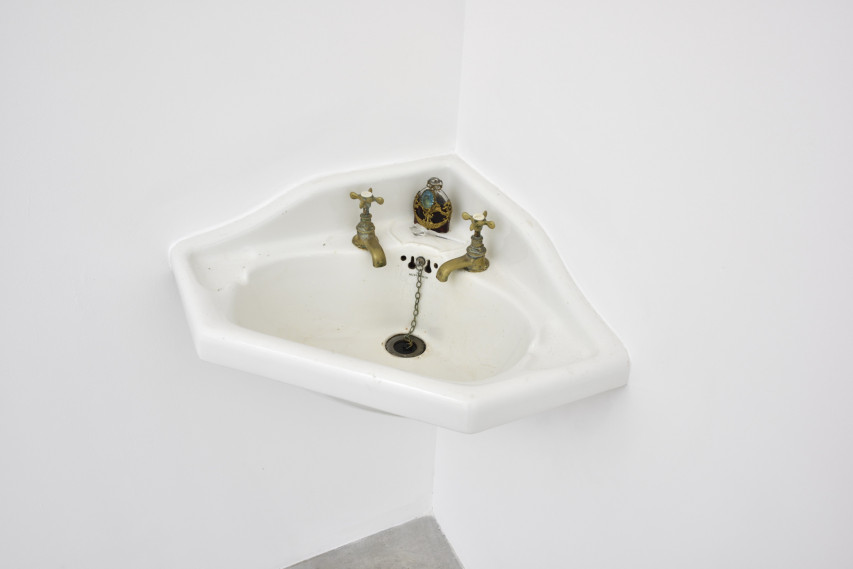 Jill Mulleady has taken up residence at the Consortium Museum. Here she weaves a dreamlike, familiar “domestic life” filled with signs and their shifting layers of meanings––wether through their provenance, their relationship to historical context, or their currency as universal icons.

An imaginary interior for the already dead heroine of a novel combines the garret and the living-room, a corner sink and a devoured by moths, hand woven wool blue Chinese rug on the floor. These objects serve as clues, weaving the intermittent narrative from the paintings.

A 14th century Veronica made of stone with faint traces of polychrome paint, borrowed from the rooms of the Dijon Museum of Fine Arts, lifts the veil in a stifling jungle atmosphere conducive to slithering cobras.
​
This new world has been built on secret strategies and Baudelairian correspondences––according to the poet, only artists are able to decipher the meaning of those allegories that can take us from the world of perceptions to the world of ideas, from the sensitive to the tangible, and from emotions to knowledge.
​
The figures, things and characters that populate this exhibition compose an immersive landscape, an imaginary world that Mulleady navigates with ease and grace.
​
— Franck Gautherot & Seungduk Kim 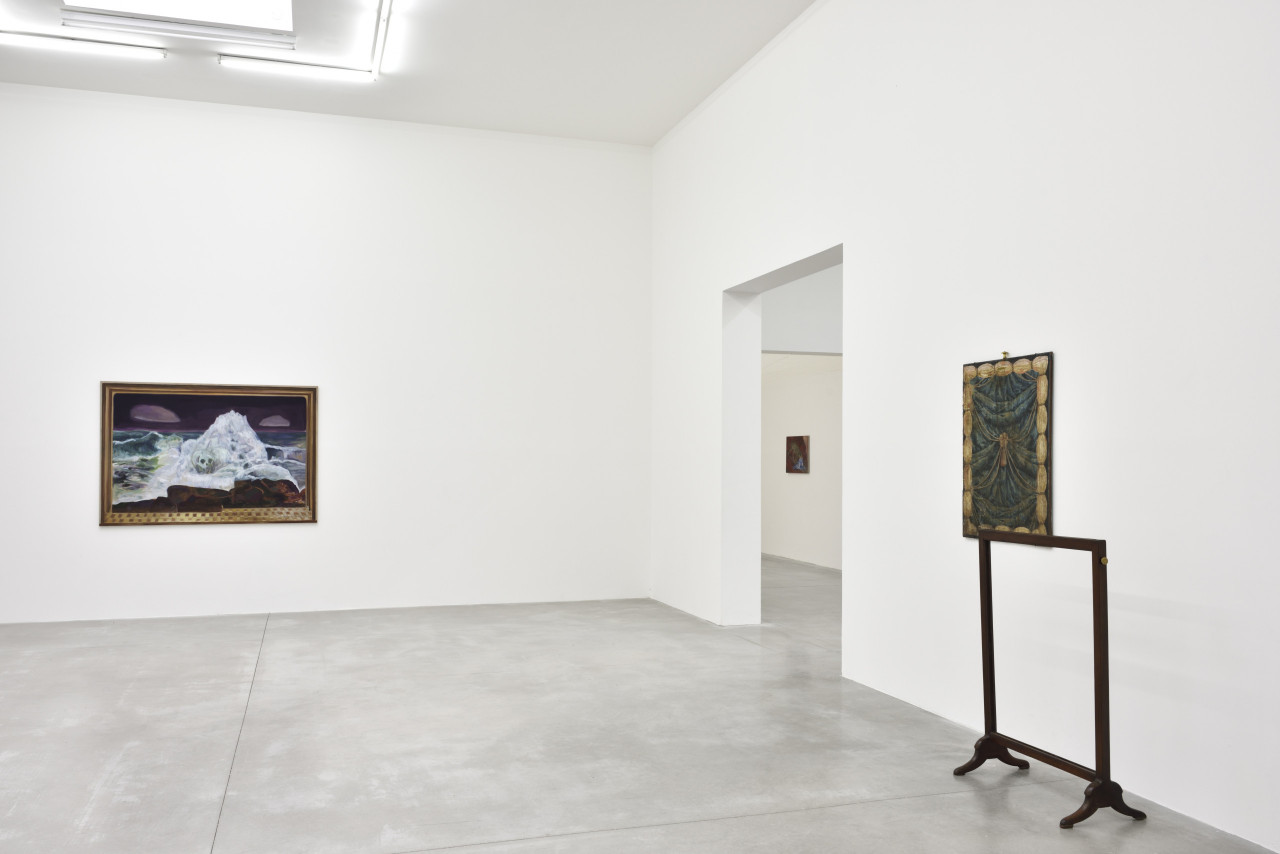 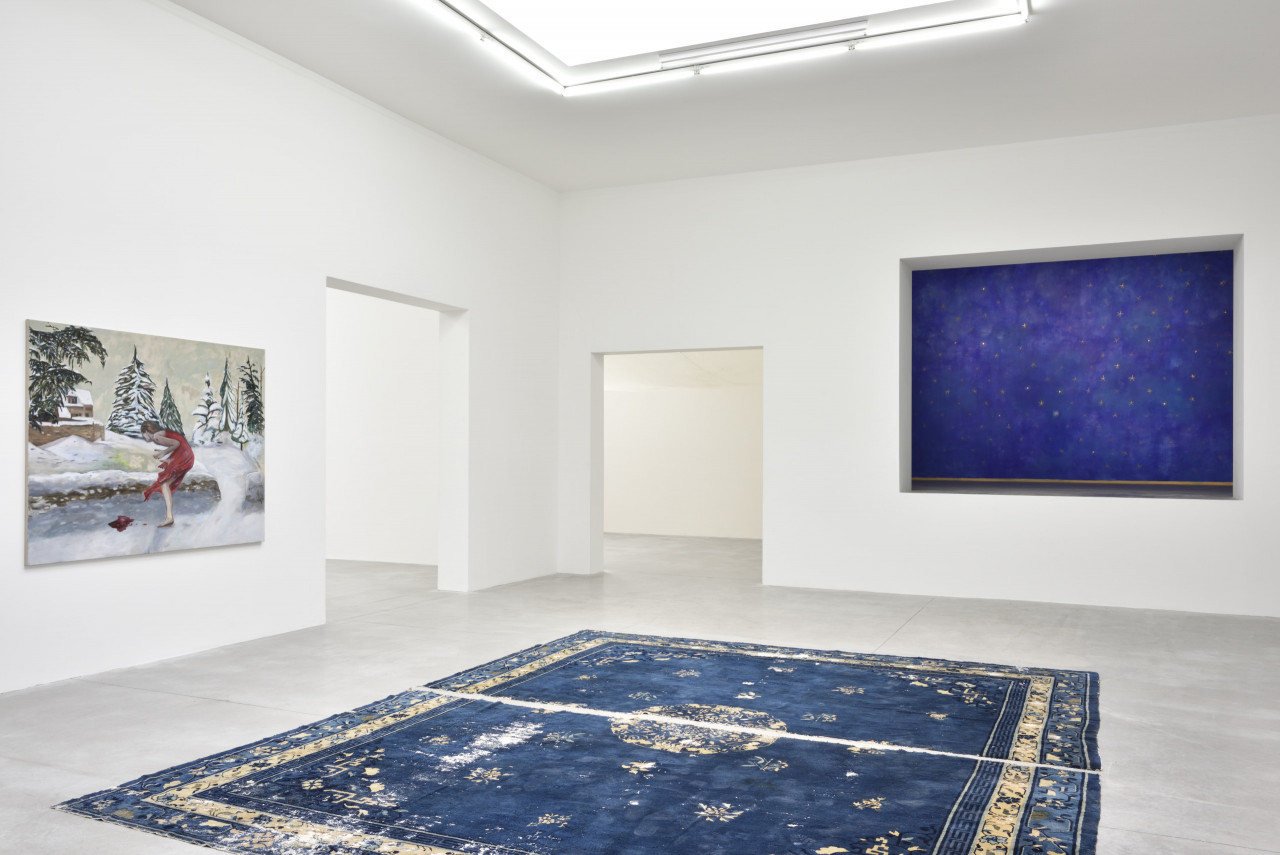