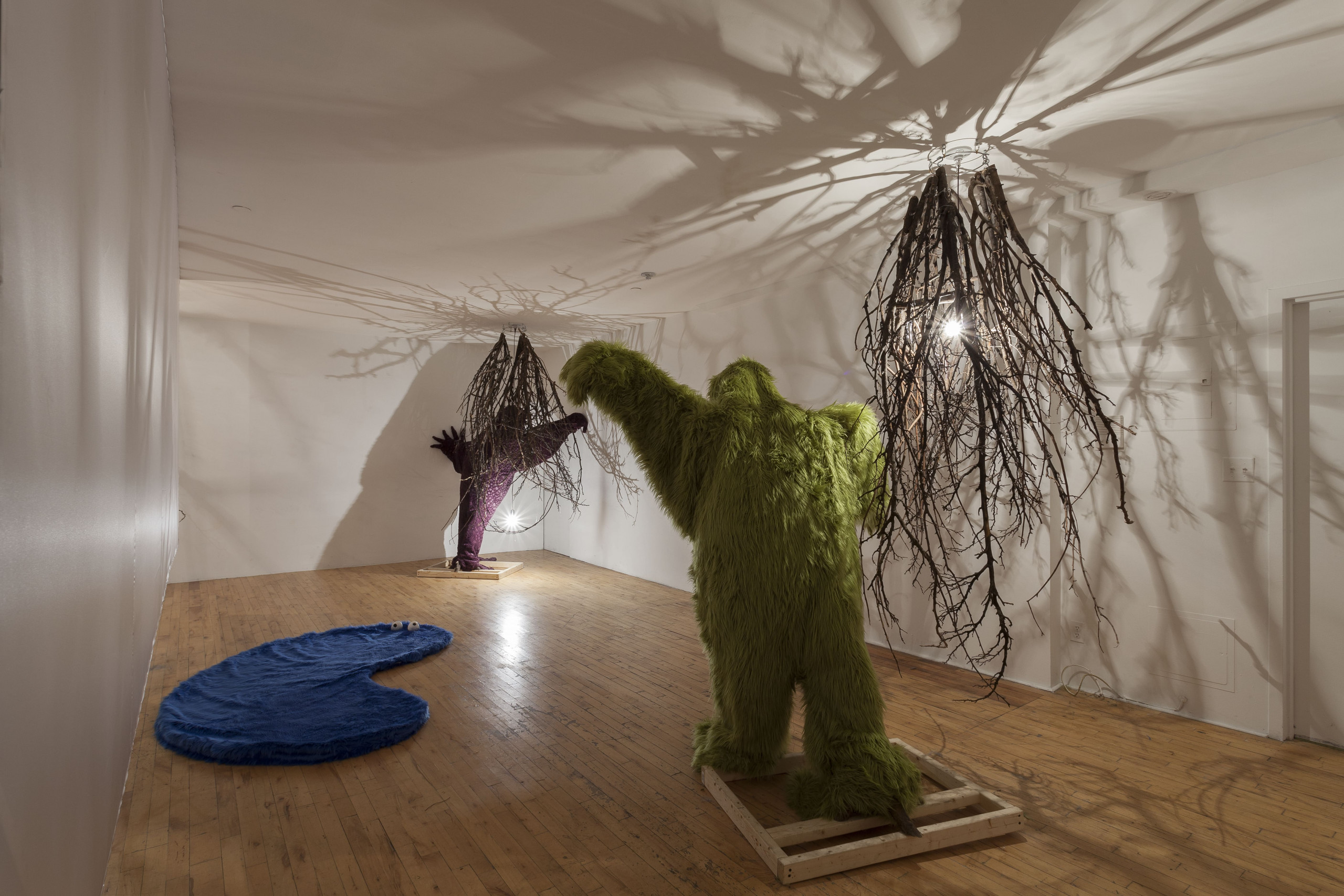 After his first one person show this year and many works in group shows, ST presents a very new production under the title “Hypocrisy Ladders,” leading us into a story based on a setting of preexisting and recognizable objects such as branches, cookie monsters, shadows, and walls.

All of these elements could appear as central but then the next moment they balance each other with differing weights, entering into a complex and literary narrative about notions of hypocrisy. Echoing Stendhal’s “Red and Black,” a classic about hypocrisy as a function of assimilation and artistic progression into the orders of social spheres, ST shows an ambivalent means for internalizing both productive and sometimes abject and shadowy qualities in the artistic search for representation.!
The branches have been repeatedly reworked after being collected from an already fallen mulberry tree, cut and glued and painted and rebuilt in order to determine their shifting function as both sculptures and their meaning within the whole installation.

Following his extensive earlier practice in collaboration as an artist, composer, and performer, ST continues to transform these experiences, conceding that all artistic work is based on collaborations but often concealed in hypocrisy. According to psychology, the hypocrite is one who has no awareness of his shadow self, of his dark side.

Although this new work could be described as a break from his earlier modes of not questioning or disrupting space, the issue of earlier participations, ST expands upon a piece from a 2012 show at Kunsthalle Bern, involving his fascination for mythologies, which showed a gargoyle living endlessly in Notre Dame, turned into stone and then back to flesh. 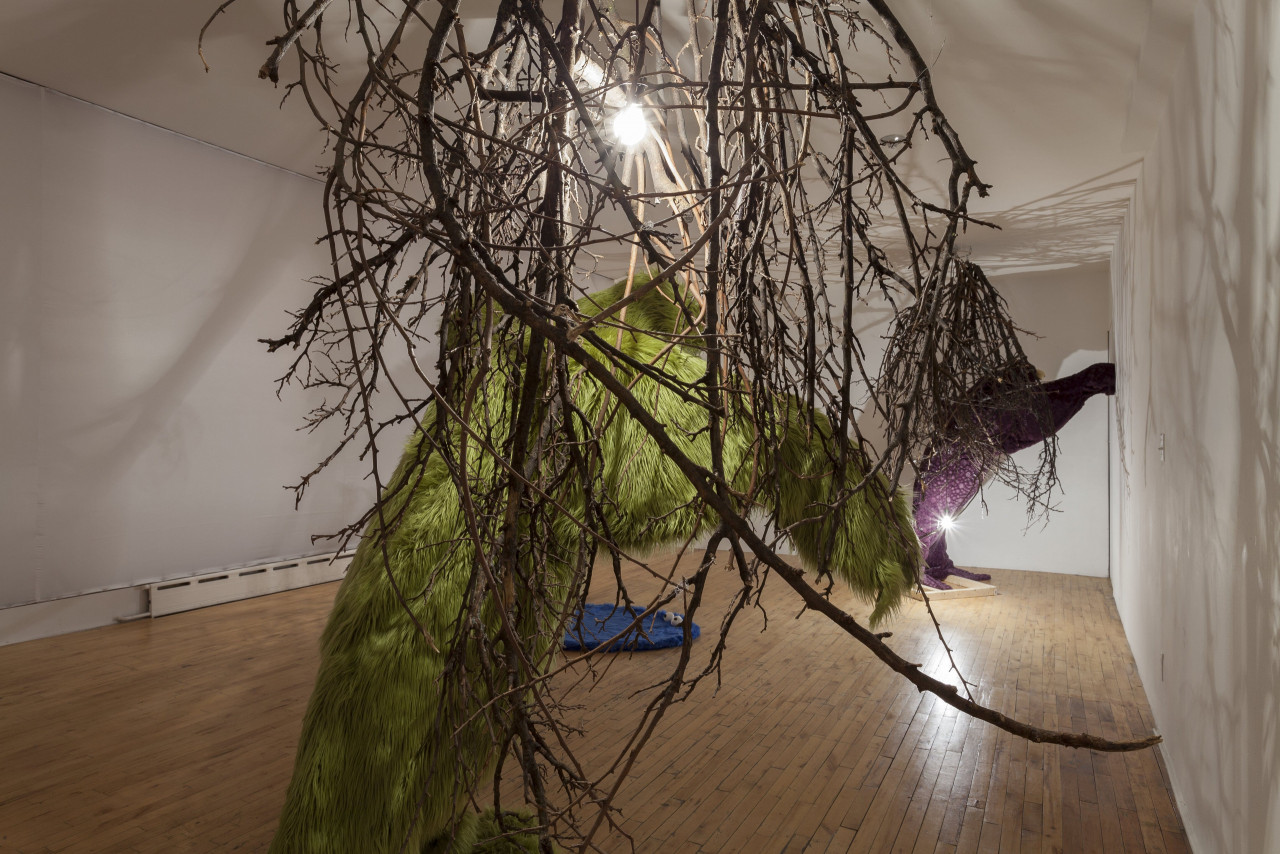 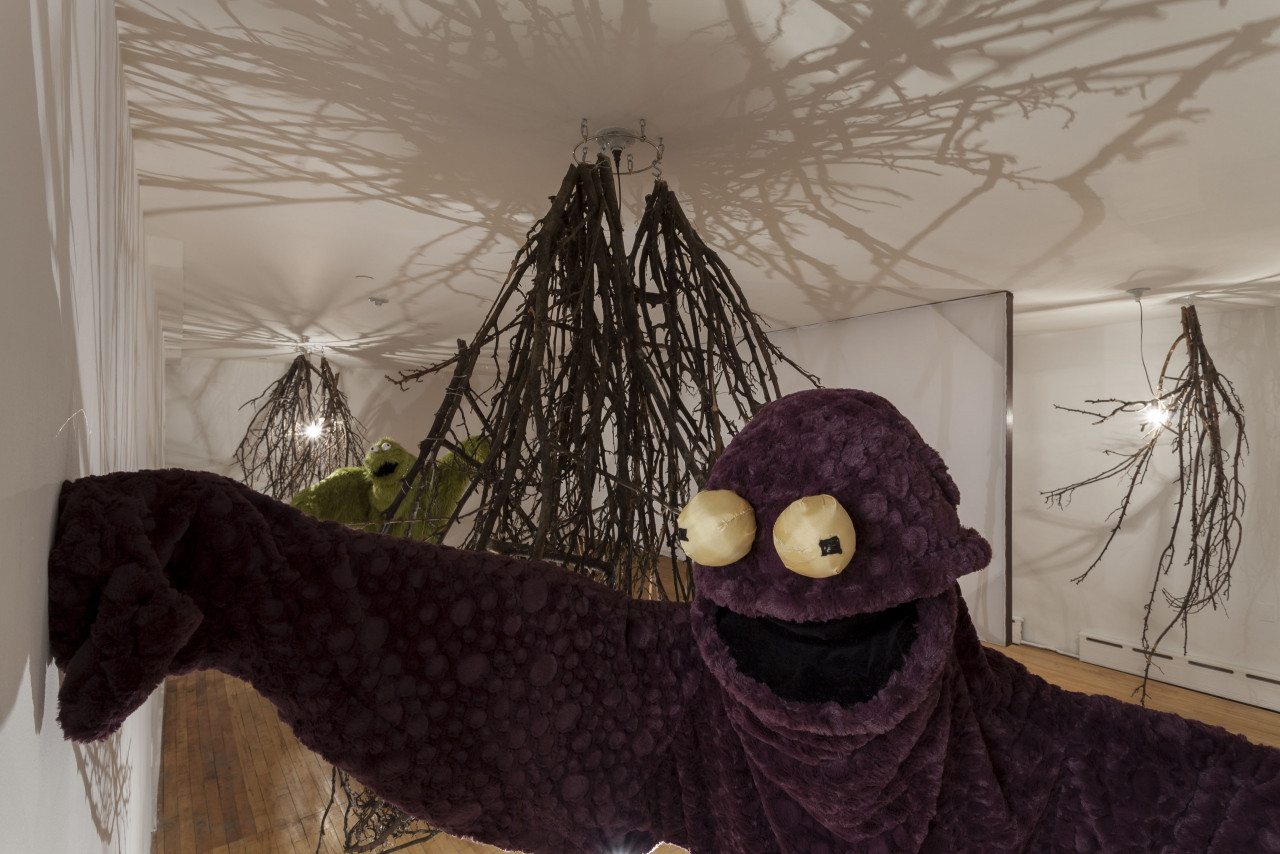 In “Hypocrisy Ladders,” two monsters are similarly frozen in the position of protagonists in detention, and actors for leading the tour through the space, sweet and seductive presences that lead into the back room of the gallery, which is transformed into a kind of mini art cinema, with a self made screen and the movie. All scenes were filmed with mobile phones as if coincidently they captured the monsters that would appear moving in their somehow beautiful shadowy and natural environment, or eventually the romantic but barred and secretive landscape of the unconscious site of artistic subjectivities. 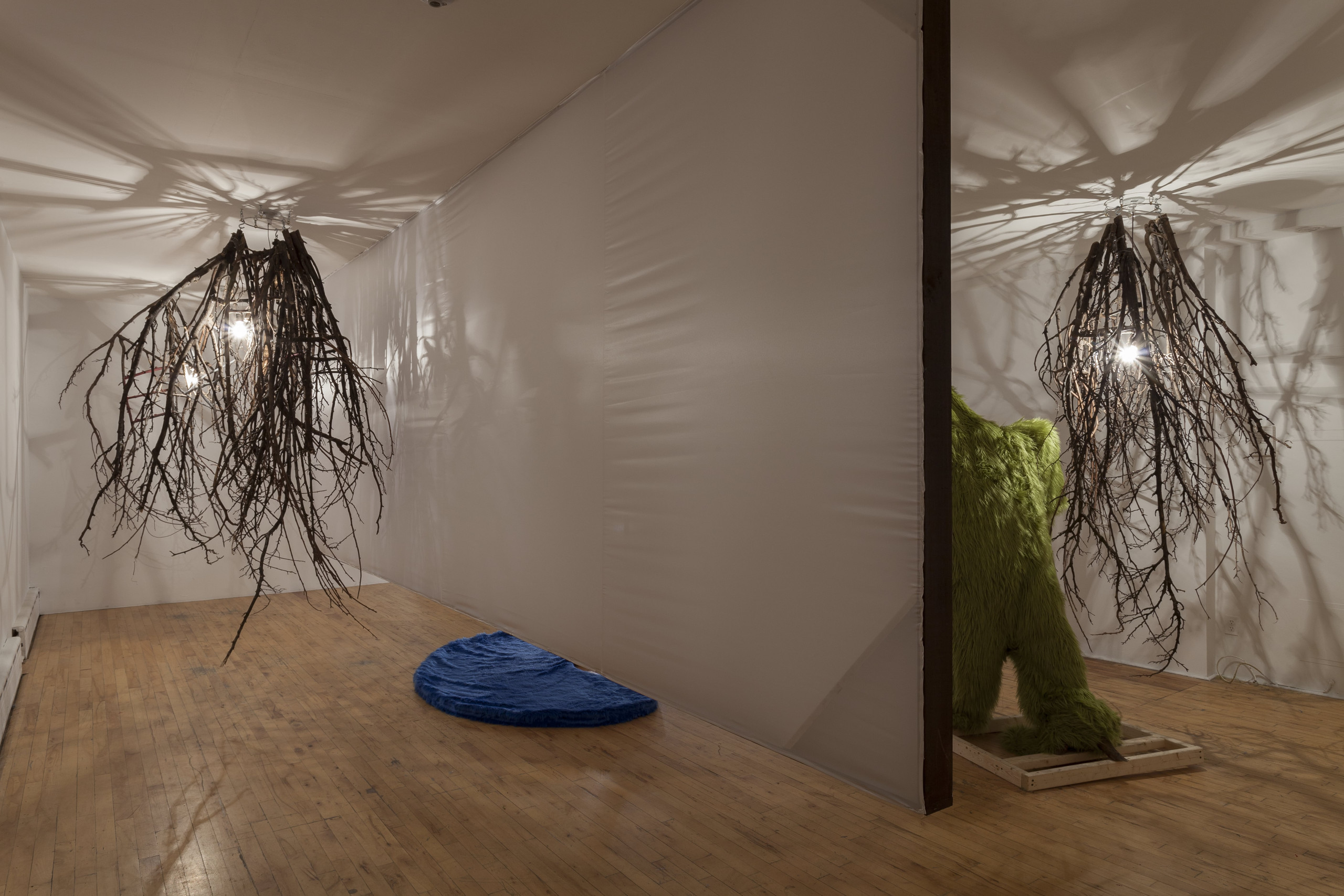 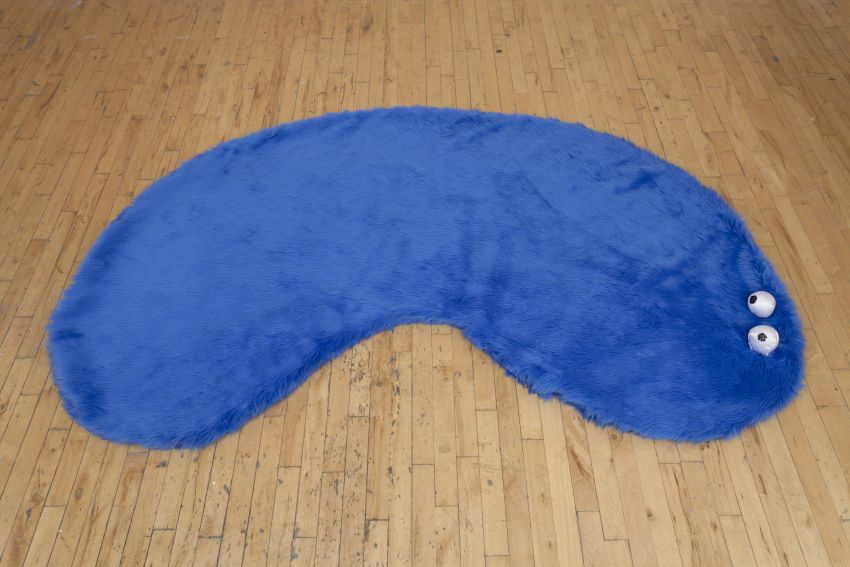 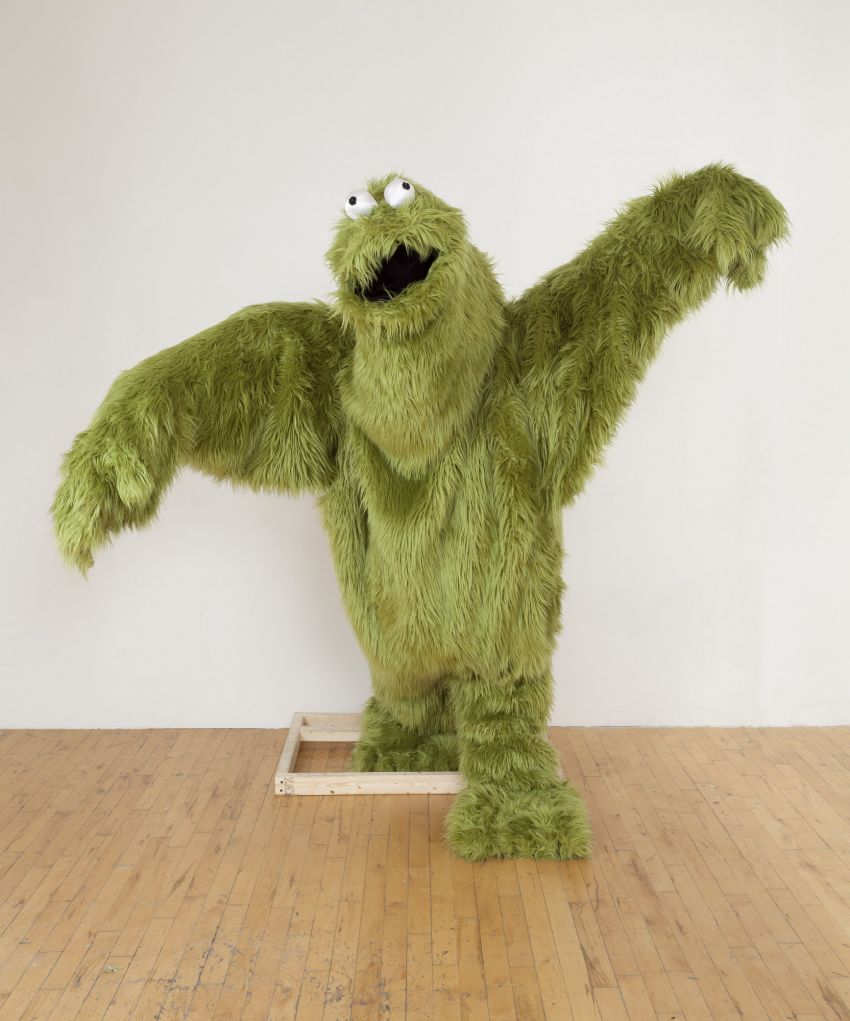 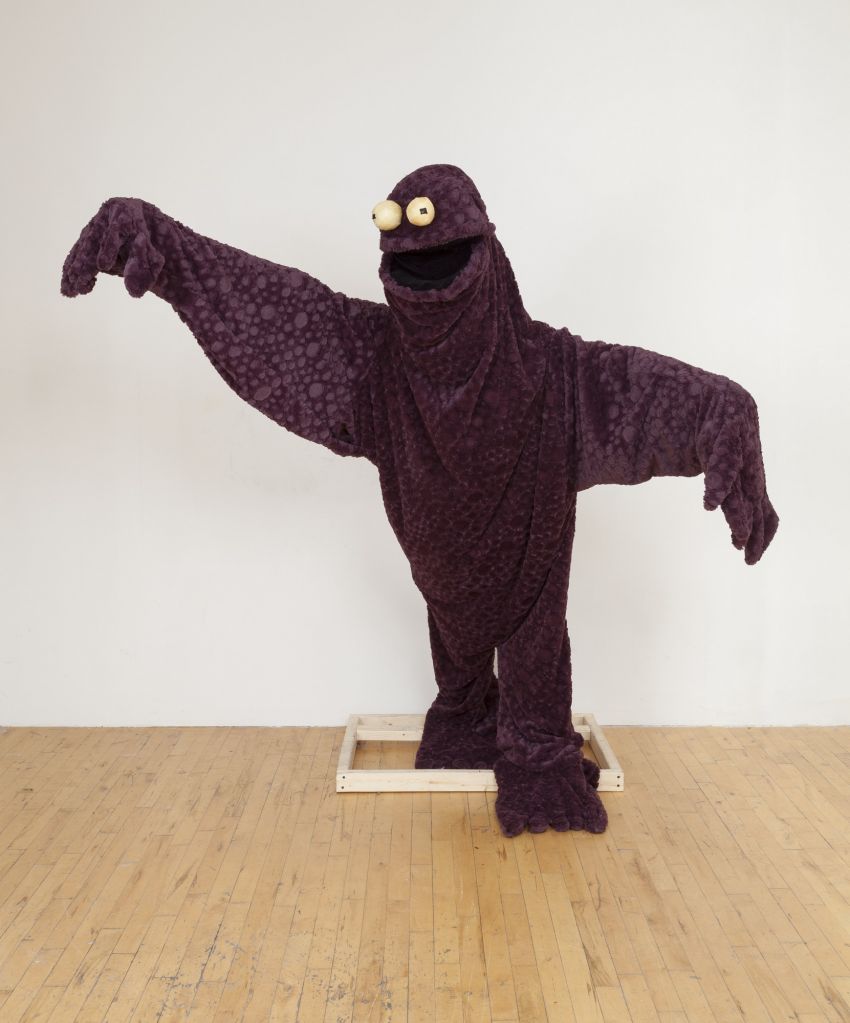