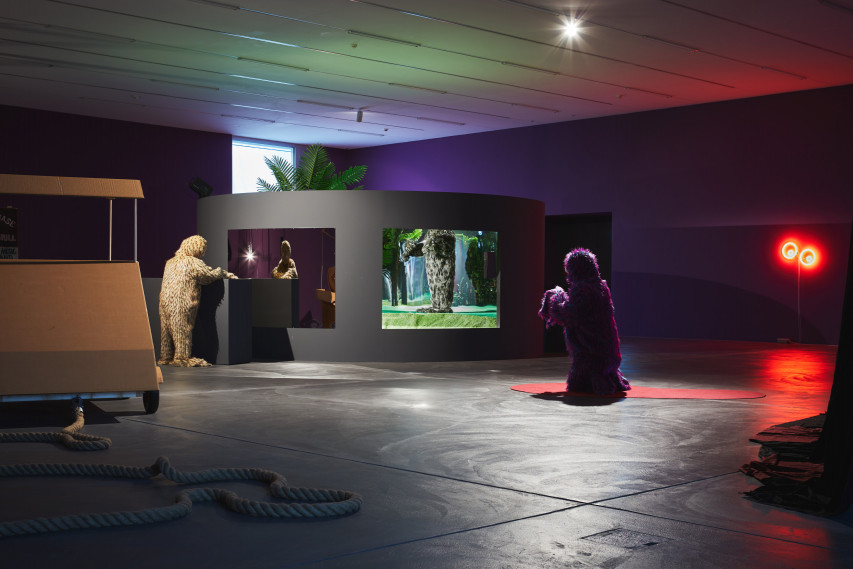 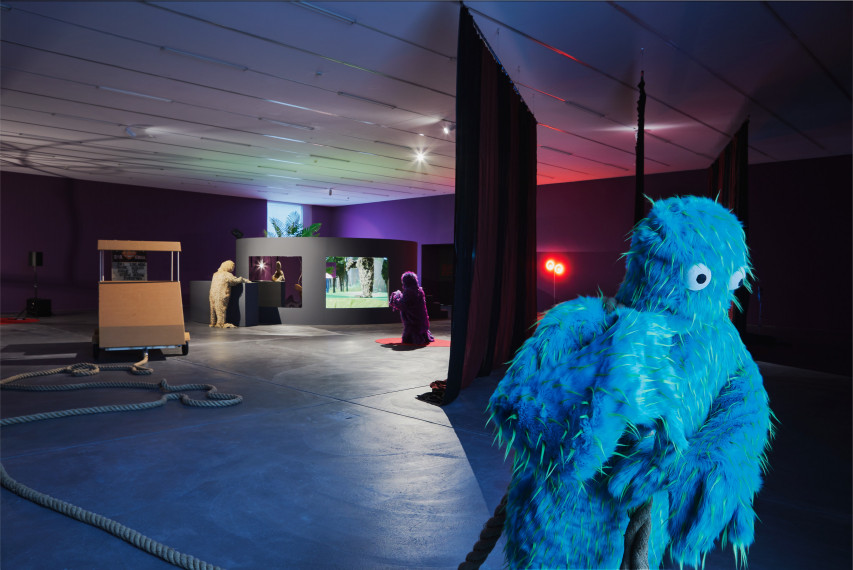 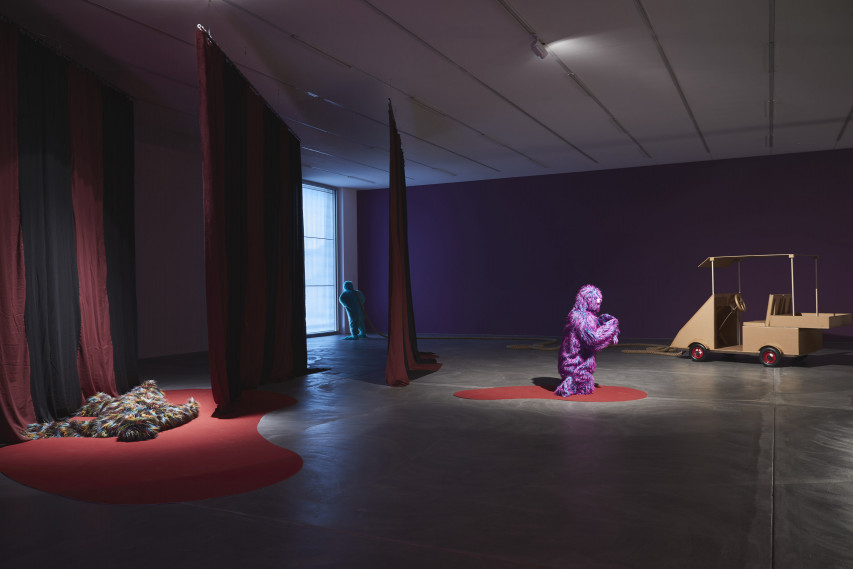 Stepping into this exhibition is like entering a brain in the process of thinking up a musical satire. The exhibition’s title already holds some clues: “honky-tonk” originally describes a noisy bar involving alcohol and live music, in other words, the type of establishment that is still popular to this day, particularly in the southern United States, and that often features country music. “Ms. Fortune,” plays on the phonetic ambivalence between “Miss Fortune” and “Misfortune.” “Link,” on the other hand, stands for the golf course as it originated on the Scottish coast where the sport has been played since the seventeenth century. The symbols “>” and “<” signify “larger than” and “smaller than” respectively. In the way they are used here they cancel each other out and therefore add up to “=.” Then again, they could be read to represent a mirroring, in other words: honky-tonk disaster = Lady Luck on the golf course. Or perhaps it is a play on the popular „grinning squinting face“ emoji as an expression of consent.
This openness and penchant for experimentation and the unknown also characterize Honky Tonk Calamity >< Ms. Fortune on the Links at Kunsthalle Zurich. The exhibition is simultaneously a bar, a club, and an immersive environment. On the occasion of the exhibition’s opening on August 30 Stefan Tcherepnin will perform together with Basel musician Yanik Soland and the Berlin-based artist and musician Veit Laurent Kurz. Further concerts featuring different lineups will follow throughout the fall (organized in collaboration with Matthew Hanson). In addition, the exhibition opening will see the launch of, not a catalogue, but the vinyl single Stefan Tcherepnin Sings with three new songs by the artist.

Stefan Tcherepnin, born in Boston in 1977, is a composer, musician, and visual artist. He lives and works in Brooklyn and comes from a family of composers: His great-grandfather, Nikolai Tcherepnin, studied under Nikolai Rimski-Korsakow in St. Petersburg and was, among other things, the director of the music conservatory in Tbilisi from 1917–21. Stefan Tcherepnin’s grandfather and father also were composers and so is his brother, the artist and musician Sergei Tcherepnin. Stefan Tcherepnin is a fellow of the New York Foundation for the Arts (in Music Composition, 2008–09) and regularly performs with a varying cast of musicians (with Real Rags, Beautiful Balance, Steit, PSST, Tsarz Carz, Real Gospel, and Existential Blowfish, among others). Tcherepnin’s New York–based band, Afuma (with Taketo Shimada) will release their debut album in September 2019 on Blank Forms Editions. His approach, his thinking, and his musical productions don’t eschew eclecticism: noise and techno are grist for the mill as is contemporary experimental music, such as, for example, that by Maryanne Amacher, or even country music—it’s all worth playing. The same is true for Tcherepnin’s artistic practice that often also develops collaboratively; he has worked with artists such as Richard Aldrich, Ei Arakawa, Max Brand, Wally Blanchard, Michaela Eichwald, Karl Holmqvist, Anne Imhof, Veit Laurent Kurz, Jutta Koether, Tobias Madison, Seth Price, Emanuel Rossetti, Jay Sanders, Josef Strau, Emily Sundblad, Sergei Tcherepnin, Hanna Törnudd, Robbie Lee, and Jan Vorisek. 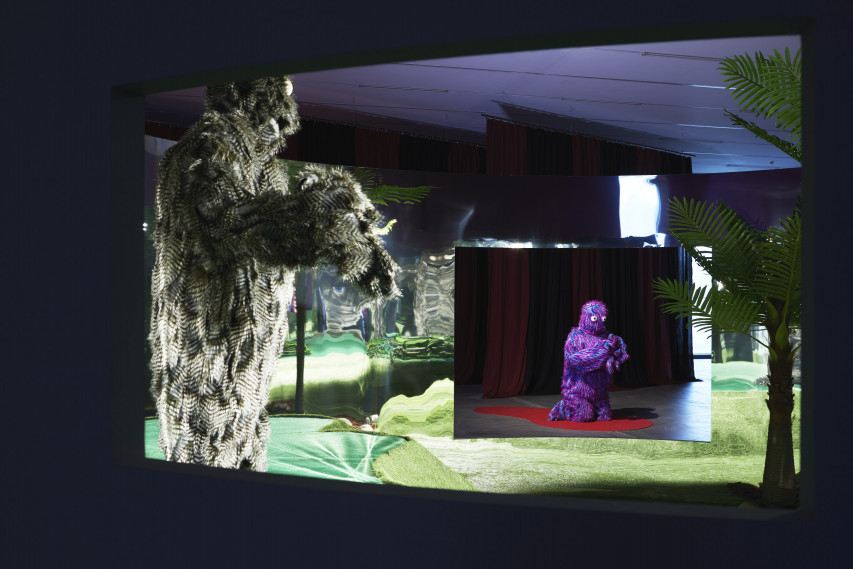 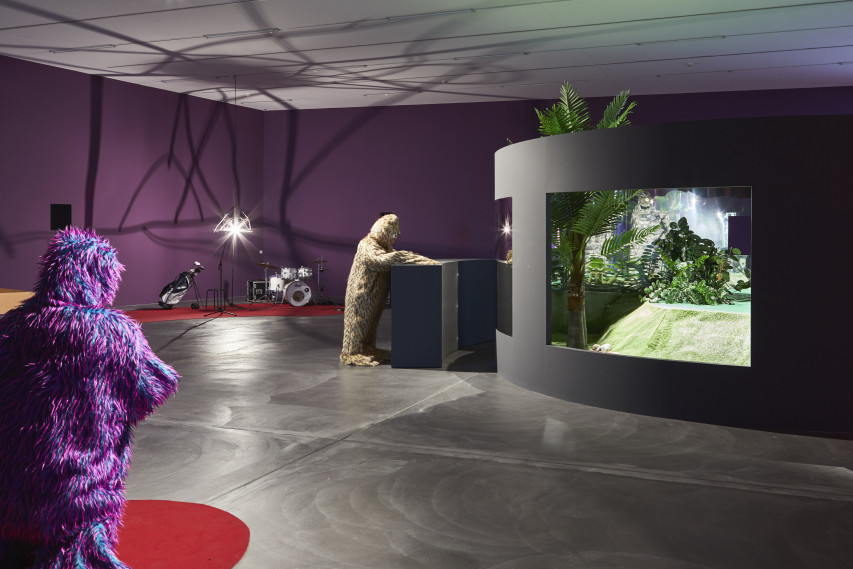 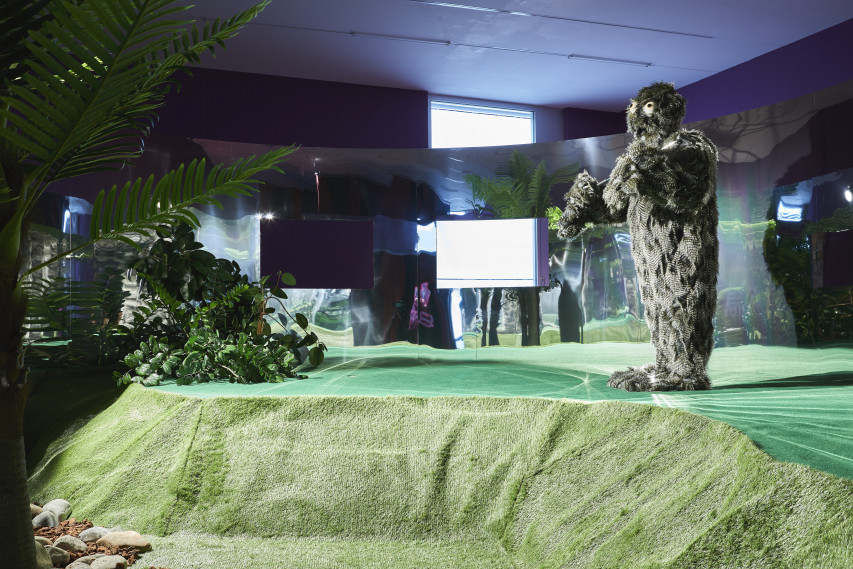 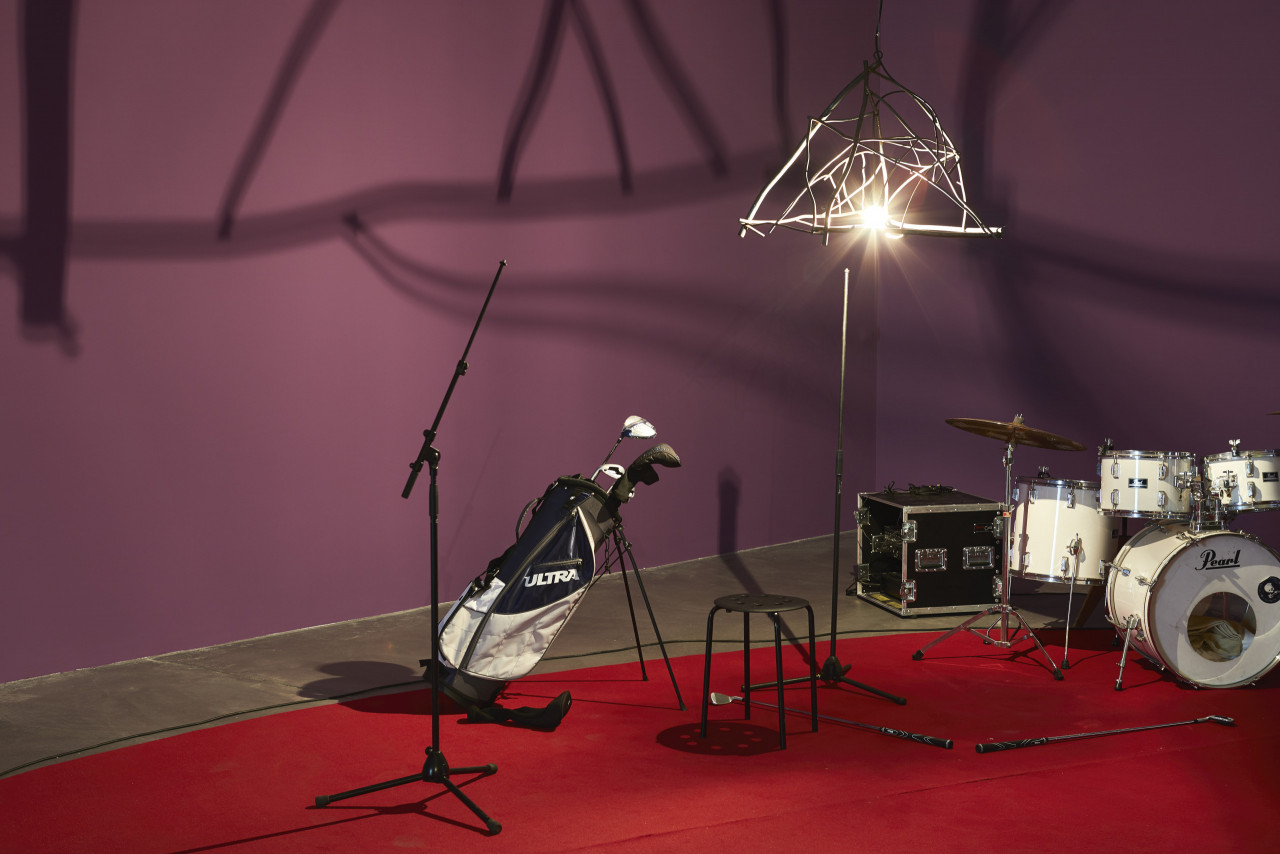 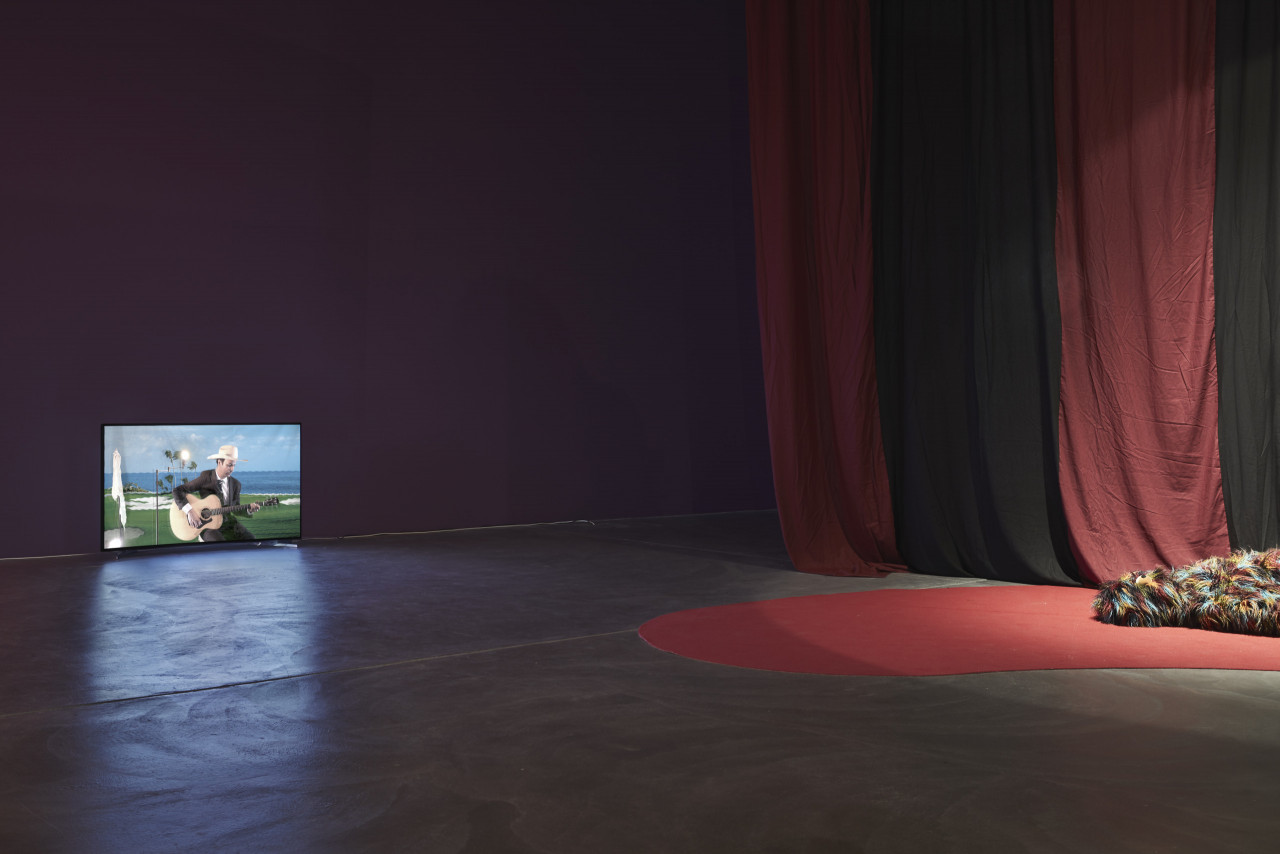 The exhibition itself developed like a musical composition with a continuous series of nested motifs, refrains, reversals, distortions, parodies, and repetitions. Among the central motifs are, as the title already suggests, reflection, the golf course, and the country music club; these are joined by six Cookie Monsters, a selection of landscapes and, of course, the music itself. The result is an exhibition with a centrifugal force, a kind of maelstrom, producing an effect akin to that of entering a brain in the process of associative thinking. The Innerworld of the Outerworld of the Innerworld, the title of Peter Handke’s iconic 1969 collection of texts, comes to mind as an apt description of what one encounters in Tcherepnin’s work.

The three elements—honky-tonk, golf, and the Cookie Monster—form the basis of this spatial thought process. They are three fundamental motifs of American culture that are as defining as they are dubious. First, there is honky-tonk emblematic of the world of the Texan cowboy, but also for a marginalized community with a big love for music; one that is also representative of a masculine and, at times racially driven, comradeship; for rough straightforwardness and gruff integrity. Secondly: the culture of golf. In Europe a sport of the upper classes, golf evolved in the United States as a sport for the masses without losing its exclusivity. The golf course is and was the site for networking and dealmaking; it is tastefully embedded within domesticated nature. As such, the golf course has become the common man’s French landscape garden where the honky-tonk bar as its clubhouse stands in for the gazebo. The sport recently fell into somewhat ill repute, because it has become associated with the “übergolfer” Donald Trump and his controversial views on culture and the world at large. Sponsors, however, stay true to the sport. And millennial? Does golf have a good carbon footprint? As the third motif, the Cookie Monster makes an appearance in six different guises. It emerged in 1969 as a humanoid, saucer-eyed, and irresistibly cuddly monster for the popular television series Sesame Street. Always on the prowl for sugar and cookies, the Cookie Monster is emblematic of a child hooked on sugar, revved up to the point of hyperventilating, not unlike a collector or gallerist at an art fair’s VIP opening. The Cookie Monster is also an indicator of the attempt to re-code the tropes of (pop-) culture: Recently it had to distance itself from sugar and instead turn toward fruit, vegetables, and a healthy diet in order to assume a new position as role model. Soon there will be golfers teeing off on renatured moors, putting for the World Wide Fund for Nature.

All of this is dramatic and tragic; the world seems to have come undone. In the midst of today’s ardently articulated morals, trials and tribulations, and the global back talk of the Twittersphere Honky Tonk Calamity >< Ms. Fortune on the Links comes across as an oasis where we literally walk through a satire, where humor, absurdity, and a quirky sense of poetry rule supreme. Not that some moral outrage doesn’t have its place: There are assertions and heated debates that are relevant and necessary. Relieving everyday boredom and lethargy, they rightly demand profound changes. But what about laughter and self-deprecation? This is where Honky Tonk Calamity >< Ms. Fortune on the Links comes in: It is more than a social media post or an emoji, it is a real space: a republic of satire. After all, it is humor the powerful fear most. 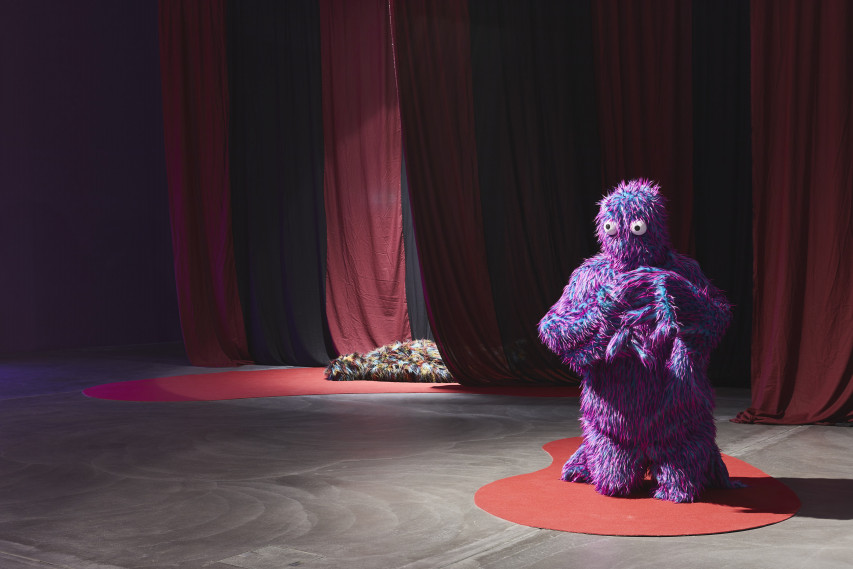 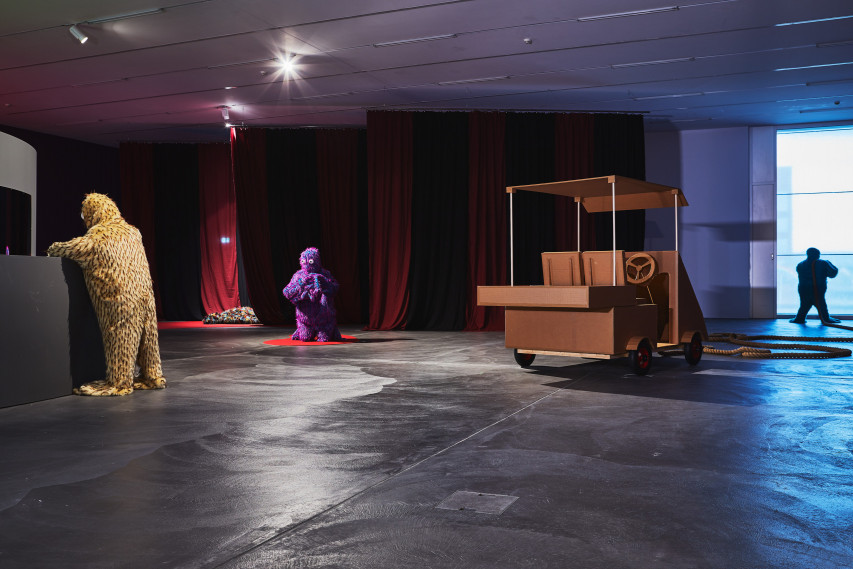 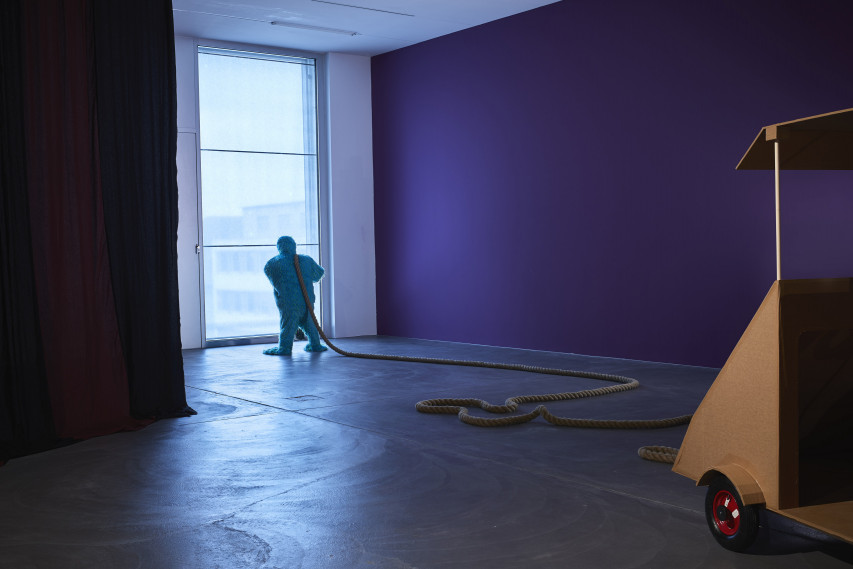 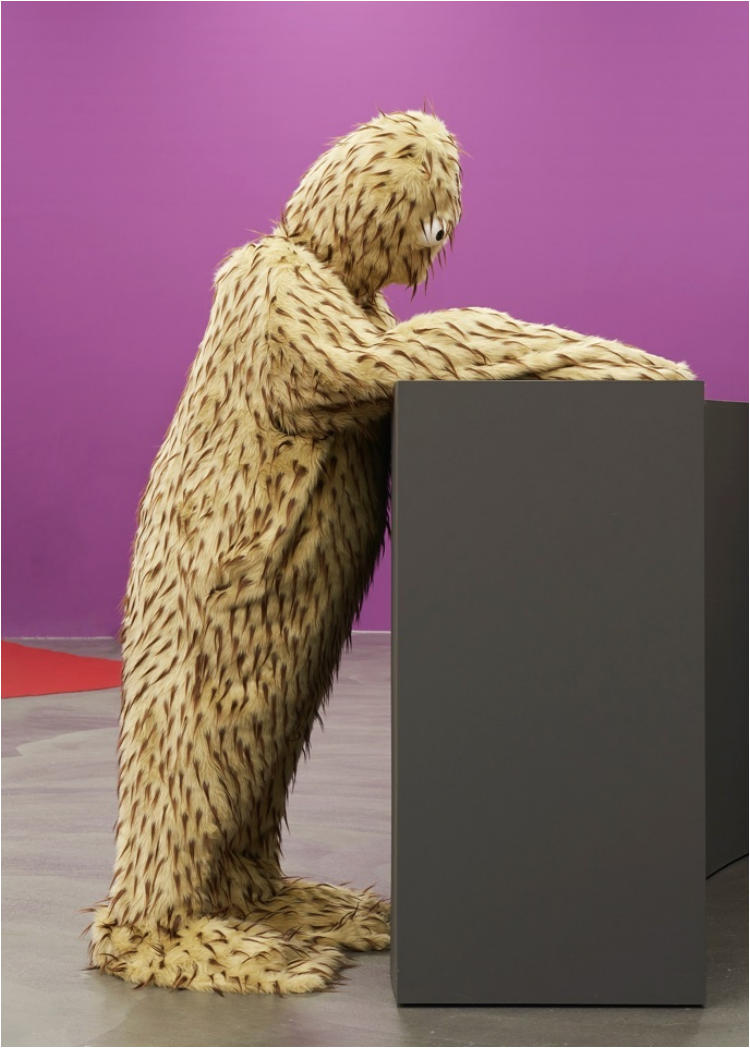