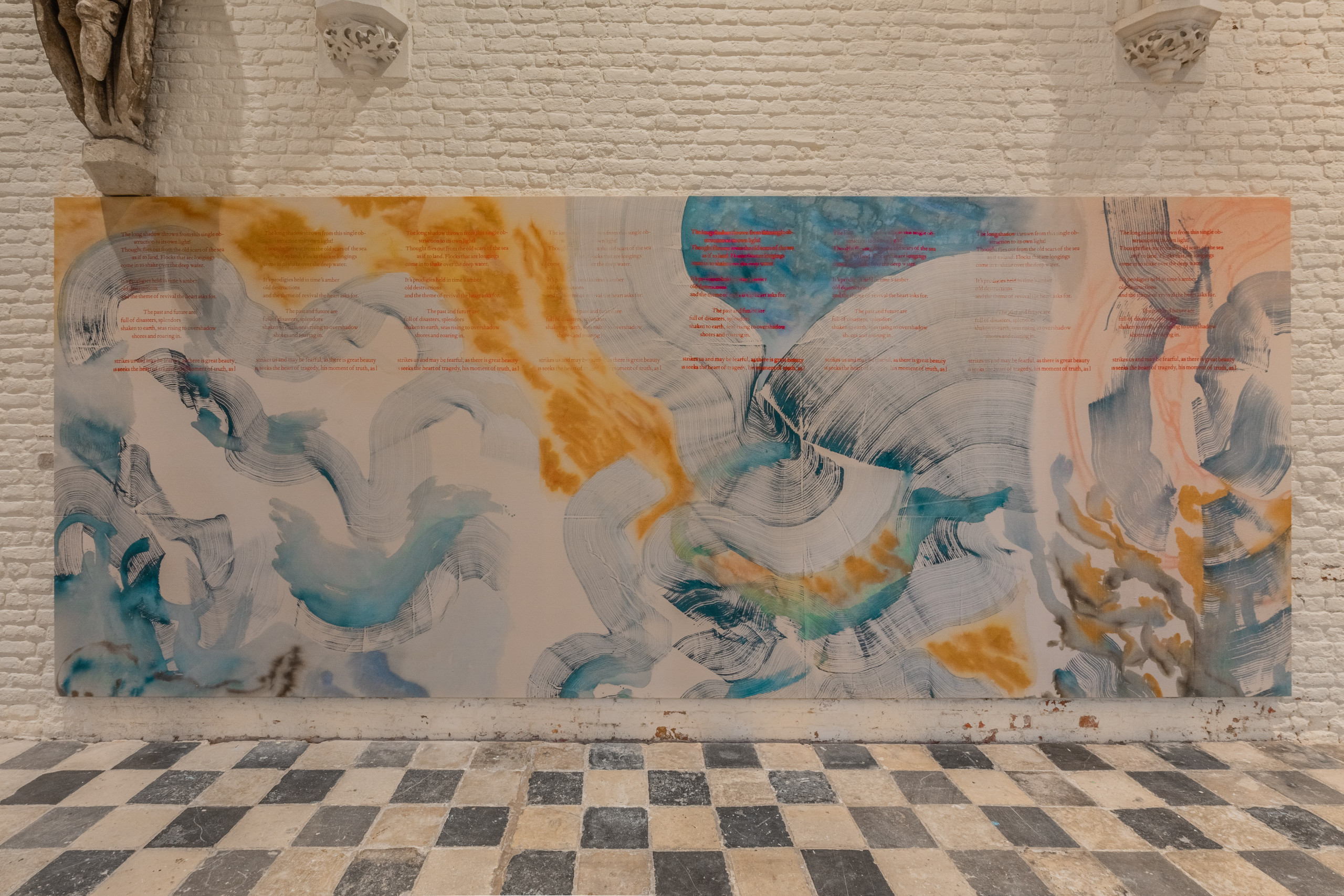 The past and future are
full of disasters, splendors
shaken to earth, seas rising to overshadow
shores and roaring in.

These lines are lifted from Robert Duncan’s poem ‘Atlantis’ and figure in a new series of large-scale paintings that Matthew Lutz-Kinoy has developed for his solo show ‘Sea Spray’ at Vleeshal. A repurposed market in the Gothic town hall of Middelburg, Vleeshal moved from trading meat to displaying contemporary art. Depicted in a 19th century painting the meat market is represented in full business, with carcasses hanging from hooks on the ceiling and baskets abound, carried by shoppers, spread over the floor and temporarily placed on tables.

The narrative of the vessel, as it is built in relation to the human body, is an insisting recurrence in Lutz-Kinoy’s work, a multifaceted practice, vacillating from painting to poetry, theater performance to ceramics. In his solo show at Vleeshal the vessel appears in different disguises; as a silkscreened photo of a bottle; as fishing baskets to catch and contain eel, as mortuary stretchers made from willow trees. The paintings themselves act as porous vessels too; containers for collages of texts and images that shine through recto-verso, as the canvas is raw and untreated. This enables a flow of forms, where the movement of waves of one painting is meeting the structural grid of another. It’s a freeing of supposedly fixed forms, where text can become texture and image can become language. 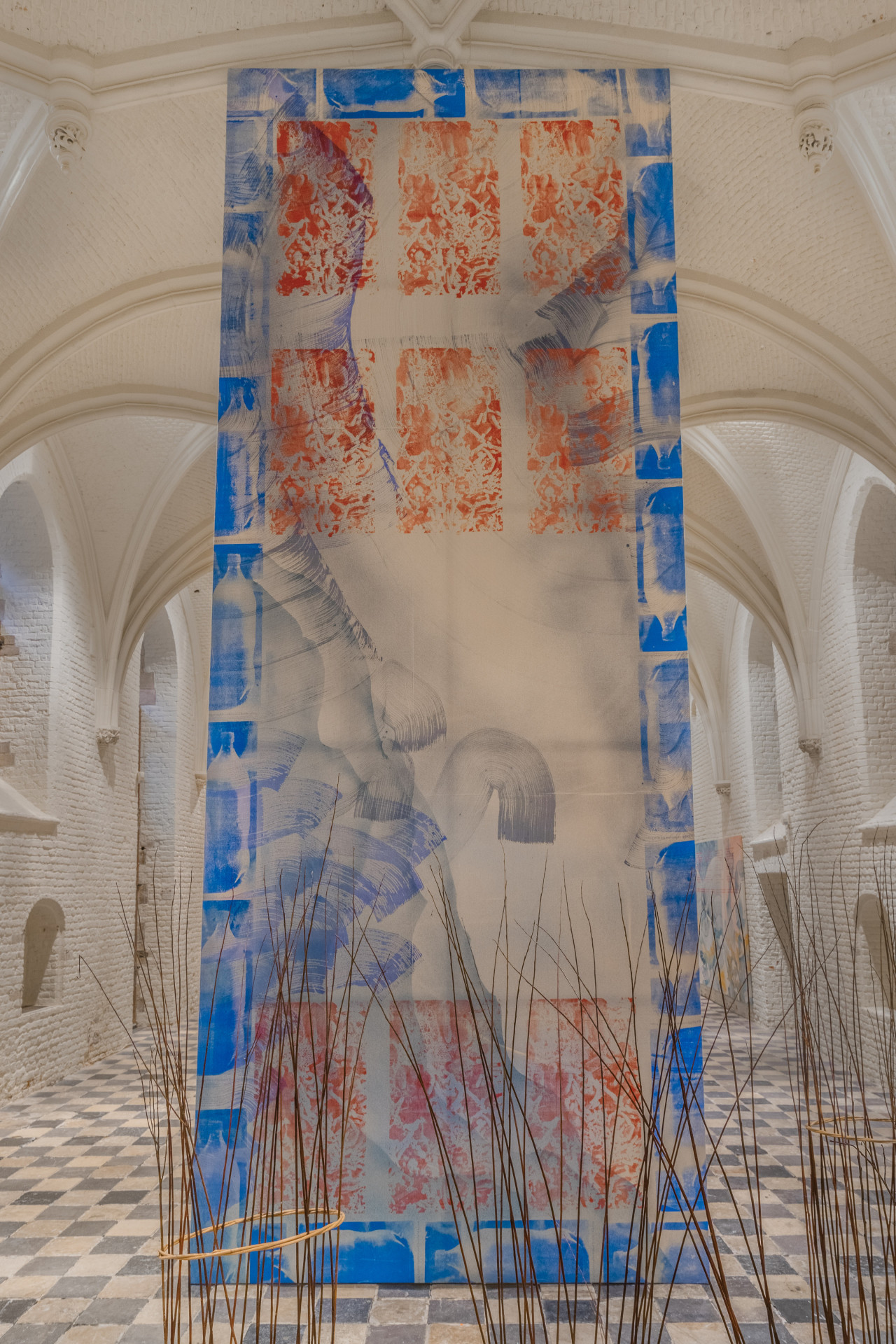 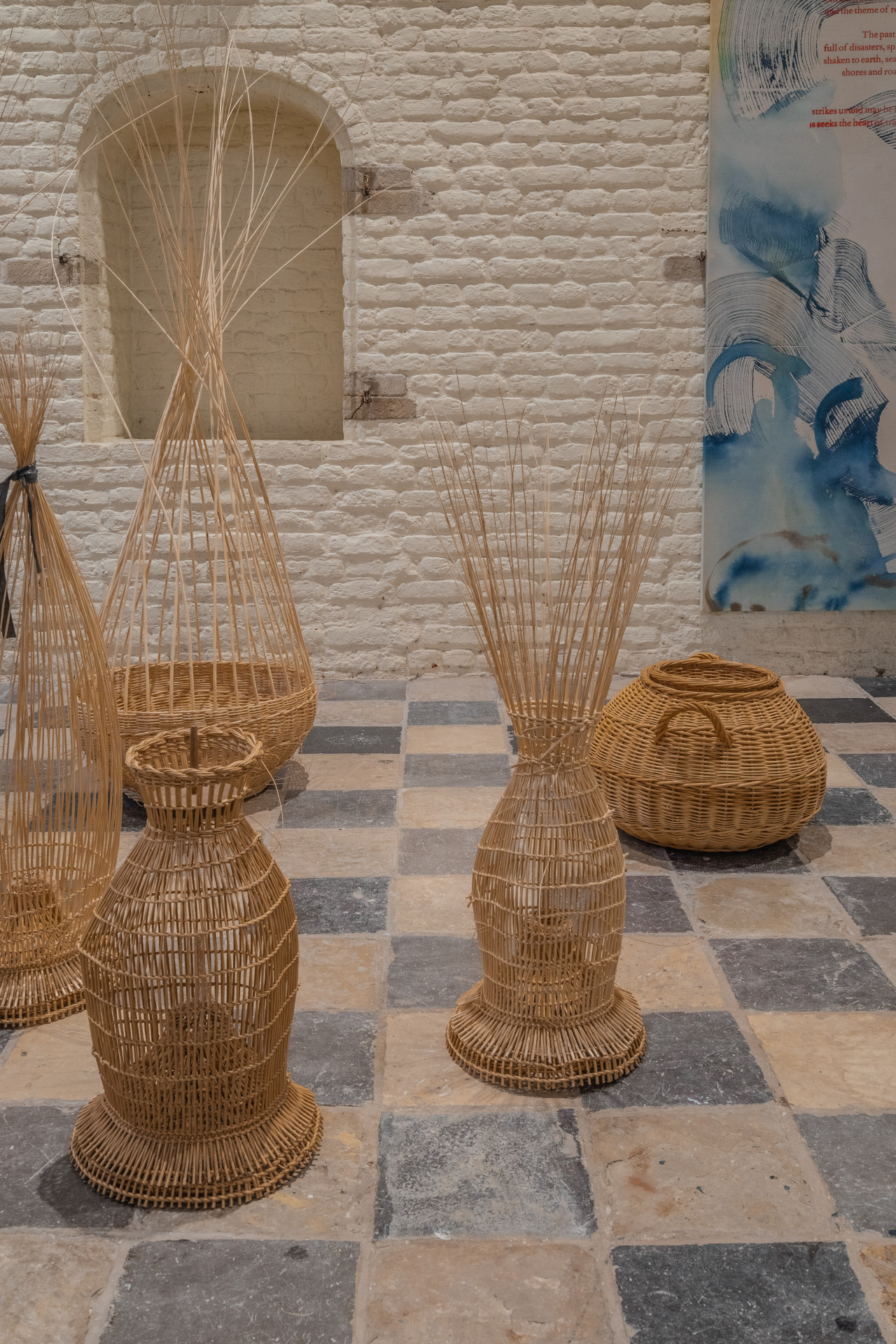 In ‘Food for Fire, Food for Thought’, Duncan describes what he wants for the last poem: “a loosening of conventions and return to open form”. Lutz-Kinoy’s overall environment for Vleeshal, consisting of soft expressionist paintings and wicker baskets in different stages of becoming, exposes precisely that. The artist describes his show at Vleeshal as “an oversized, unbound book of poems. The pages act as expansive canvases that host painting, photographs and texts. These cotton nets catch and release printed passages, mirrored onto the canvas surfaces.”

One departure point for these new works is Lutz-Kinoy’s ongoing interest in celebrating local food traditions, craft and collaboration, through which Sandor Ellix Katz’s book ‘The Art of Fermentation’ comes into play. In the foreword, Michael Pollan addresses the poignancy of fermentation “and why an act as quotidian and practical as making your own sauerkraut represents nothing less than a way of engaging with the world. Or rather, with different worlds, each nested inside the other: the invisible world of fungi and bacteria; the community in which you live; and the industrial food system that is undermining the health of our bodies and the land.” 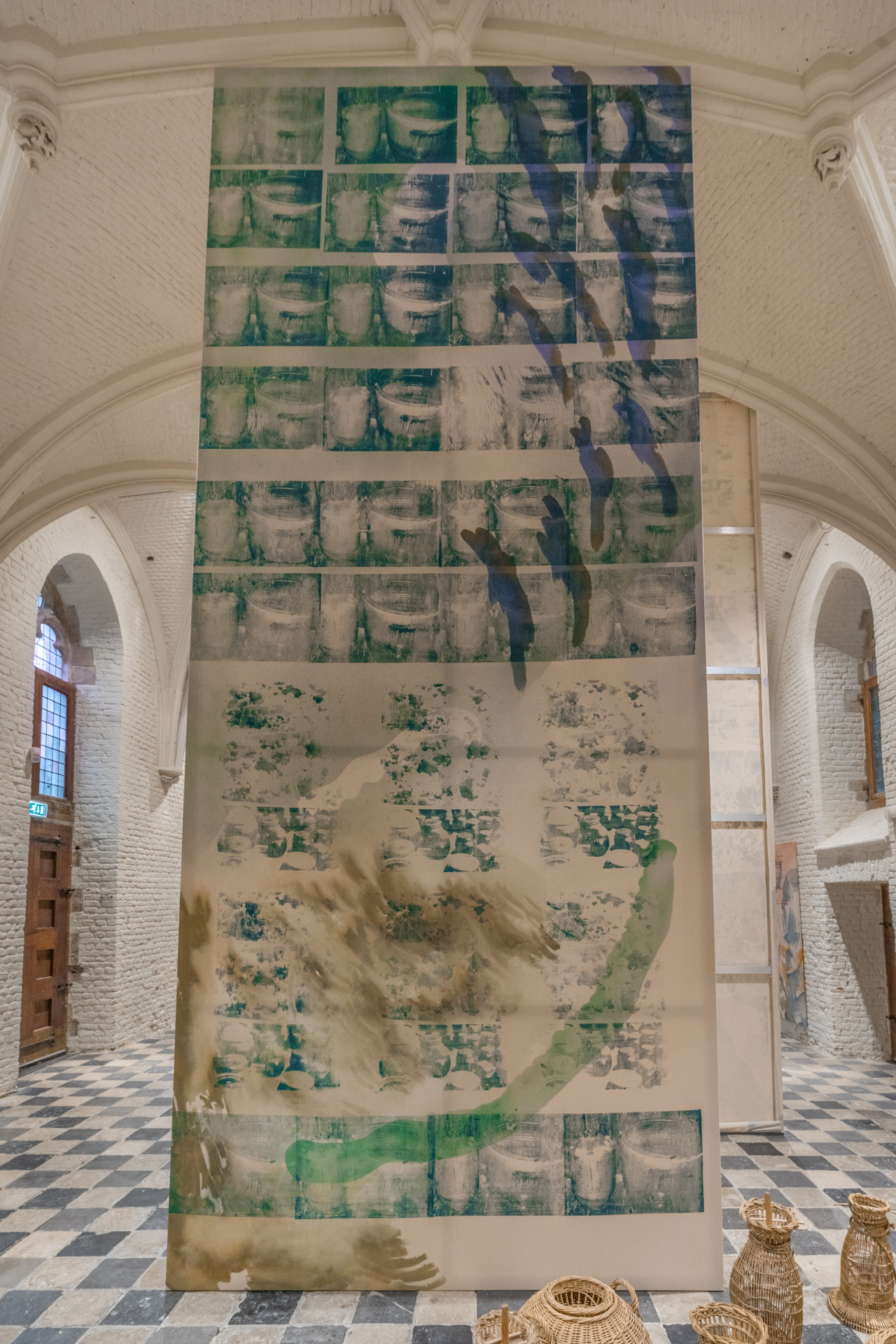 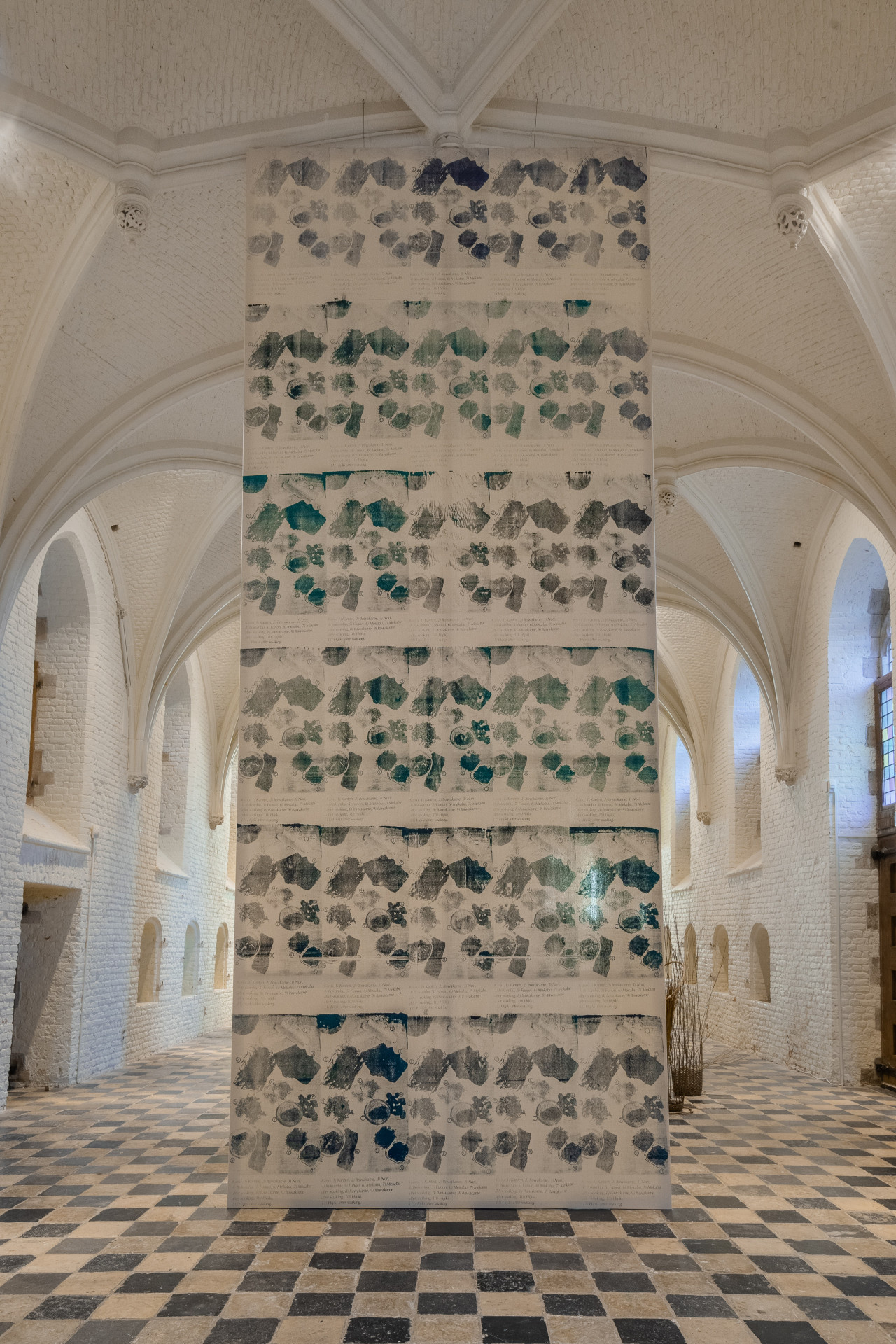 Following this holistic and neurotic logic, we can address the influence of the food we consume, acknowledging the strength of the bacteria inside of us, which dictate our desires and behavior counter to the rational mind. Many of the images that are silkscreened onto this new series of paintings come from Katz’s book. Bacteria are flourishing; seaweeds, drinks and food fermenting on these colorfully stained canvases.

Inside the former meat market we can think of the relation between the world’s carnivorous appetite and the disasters of our changing climate. And inside of the exhibition, we locate ourselves, as large as a person and as small as a bursting sea spray particle.

The exhibition is curated by Roos Gortzak, Vleeshal’s director. In 2013, she curated ‘Keramikos’ by Matthew Lutz-Kinoy and Natsuko Uchino at Kunsthalle Baden-Baden. In 2015, Matthew Lutz-Kinoy participated in the group show ‘University’ by the Oceans Academy of Art at Vleeshal Zusterstraat. ‘Sea Spray’ is Lutz-Kinoy’s first institutional solo show in the Netherlands. The official opening will be accompanied by a performance by the artist.

The baskets in this exhibition are made possible through a generous collaboration with Jan de Vos en José Schilder from Mandenmakerij De Mythe.

Funded by Mondriaan Fund and City of Middelburg. 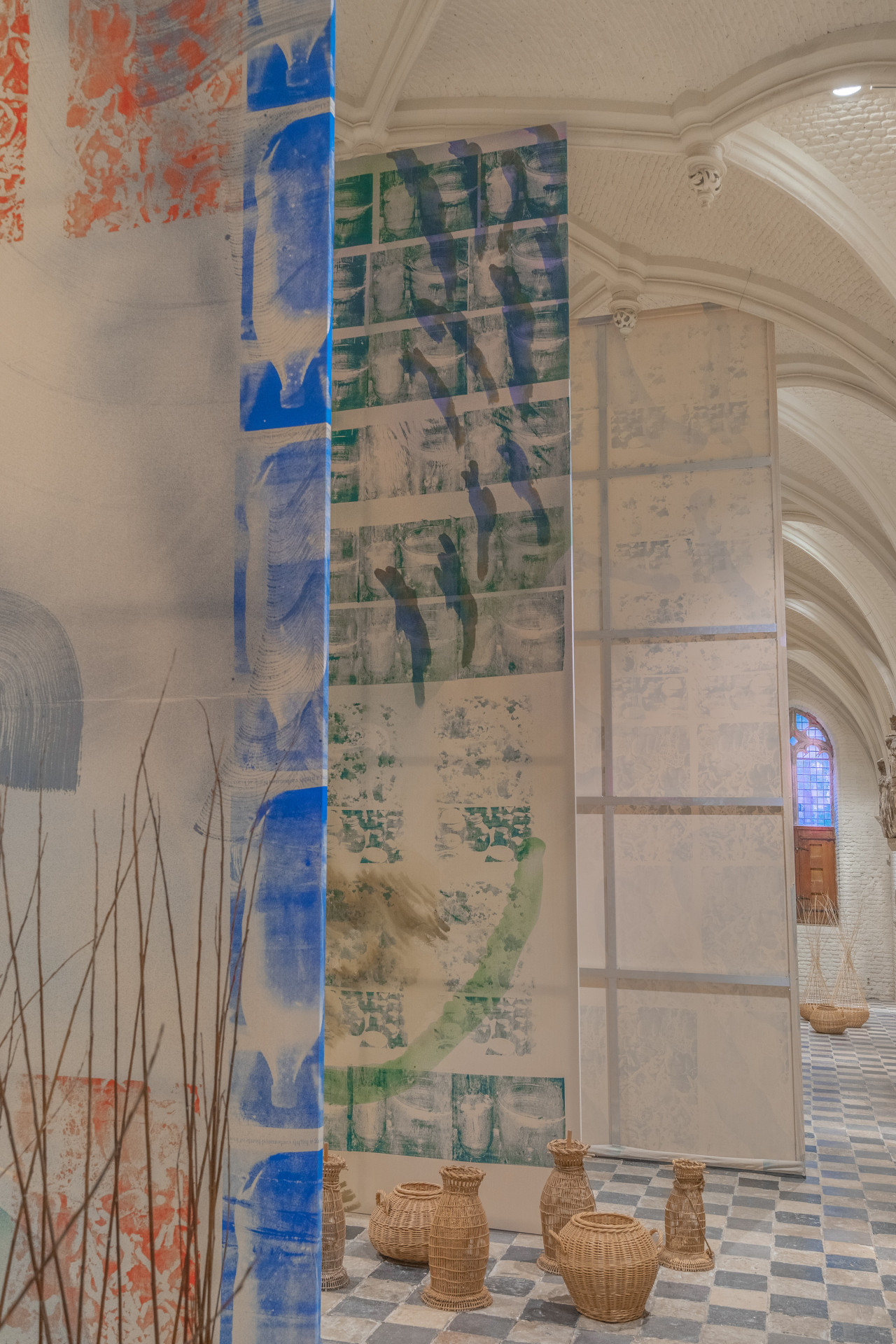 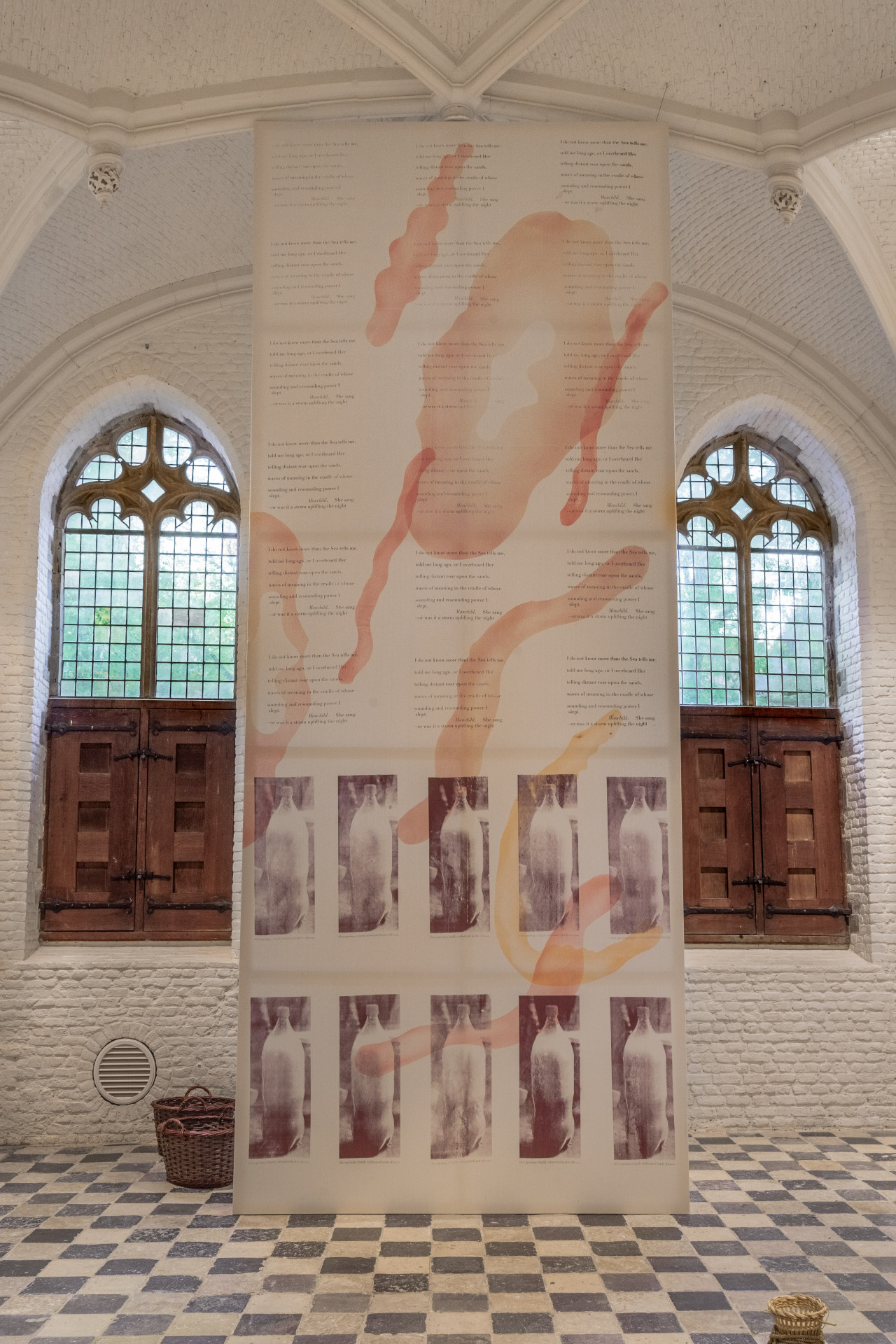