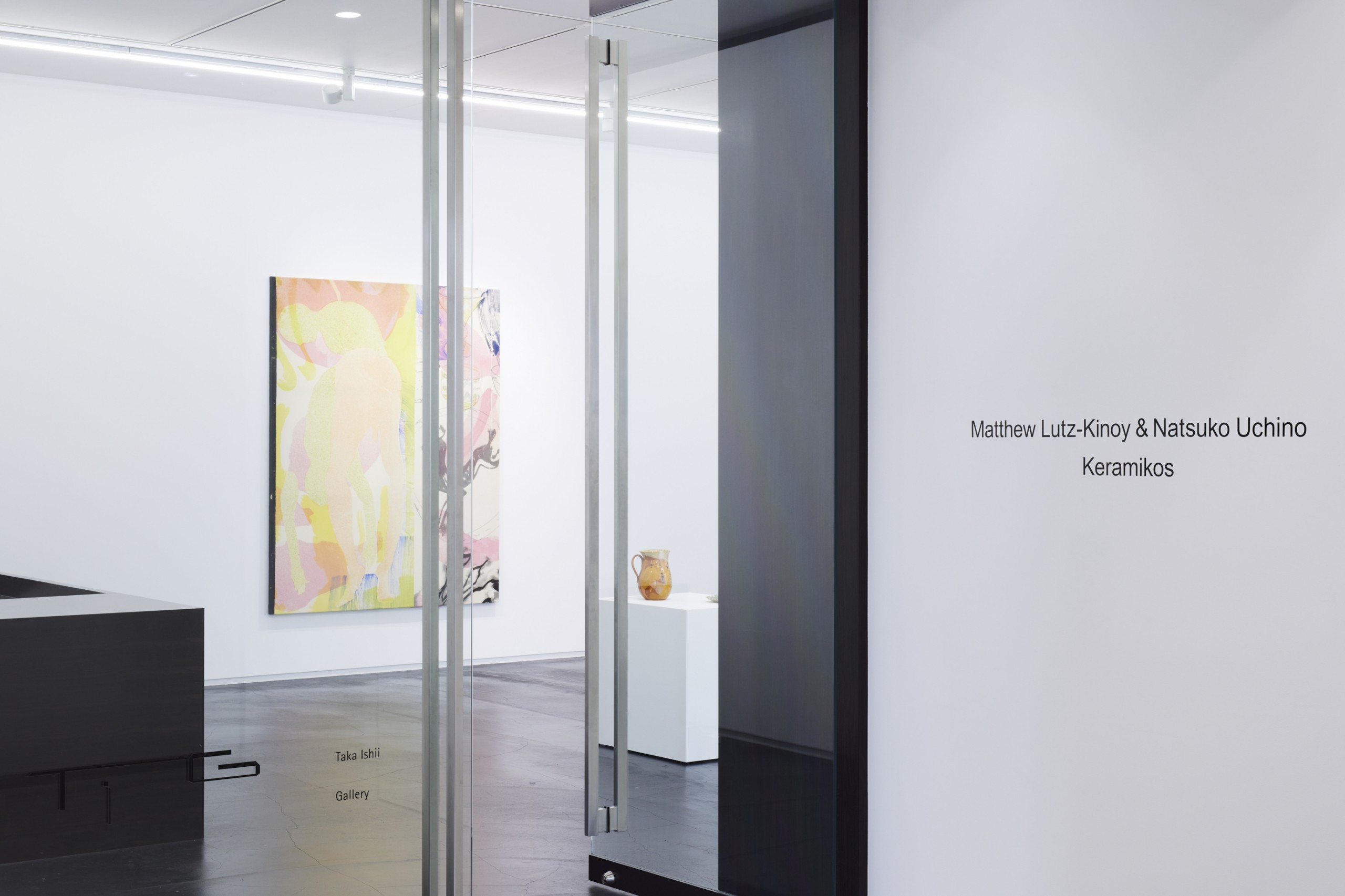 In August of 2019, Uchino and Lutz-Kinoy set up a workshop at Cerámica Los Arrayanes in Granada, Spain. Over the course of the month, the artists painted more than three hundred thrown and press molded items including dinner plates, dessert plates, bowls, large platters, pitchers and oil jars.
The Granada series is the third iteration of Keramikos, that Lutz-Kinoy and Uchino began at the Rijksakademie in Amsterdam in 2010 and which they have pursued alongside their personal interdisciplinary artistic activities, including painting, drawing and performance.

The wealth of motifs that Uchino and Lutz-Kinoy found in Mediterranean ceramic traditions appeared as so many traces of cultural porosity and evidence of circulations from the Middle East to the Iberian Peninsula by way of North Africa. The ceramics they produced explore this through their study of ornamental designs. They were particularly inspired by the syncretism in the motifs of the Mediterranean basin, because of the way that it relates to writing, scribbling, calligraphy, and cultural crossovers, all the things that led to certain patterns being called “arabesque”.

The ceramic traditions of Andalusia have been described by the artists as the Mingei of the Mediterranean.

The impulse to model clay felt pretty innate to us, and perhaps connects us to something much deeper, like an intergenerational memory, linking time and the history of making through different epochs.
— Natsuko Uchino 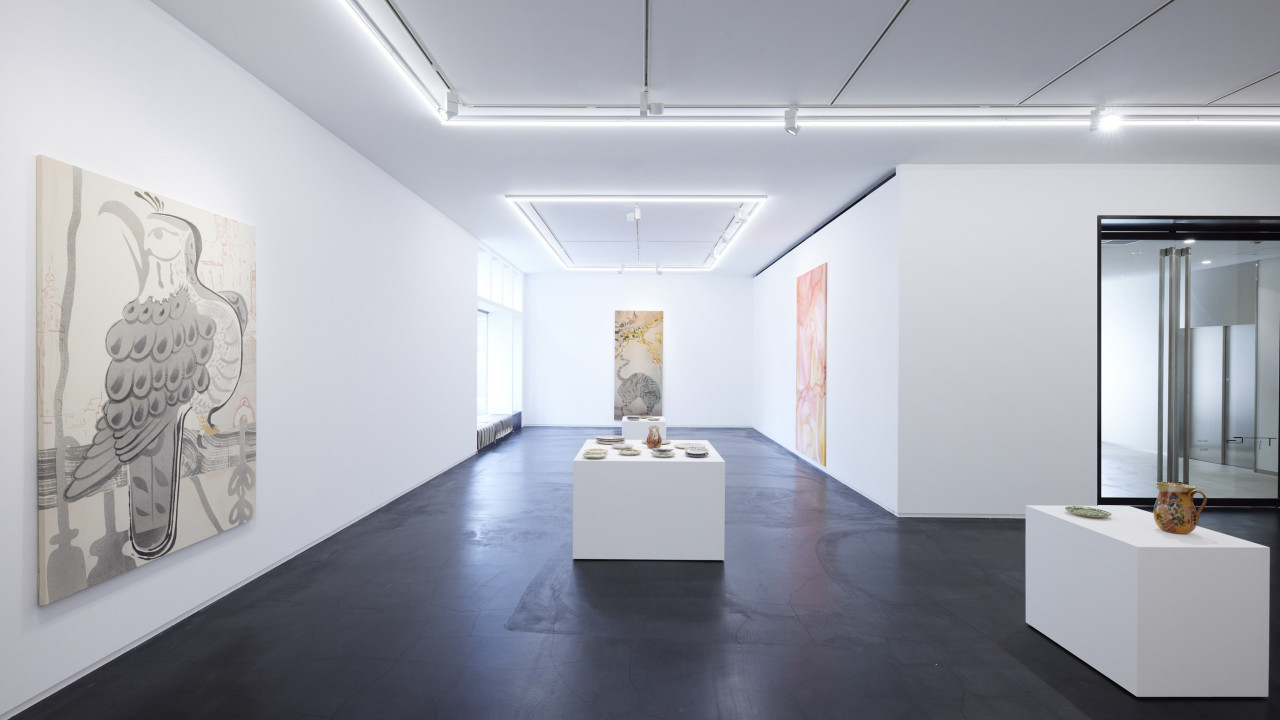 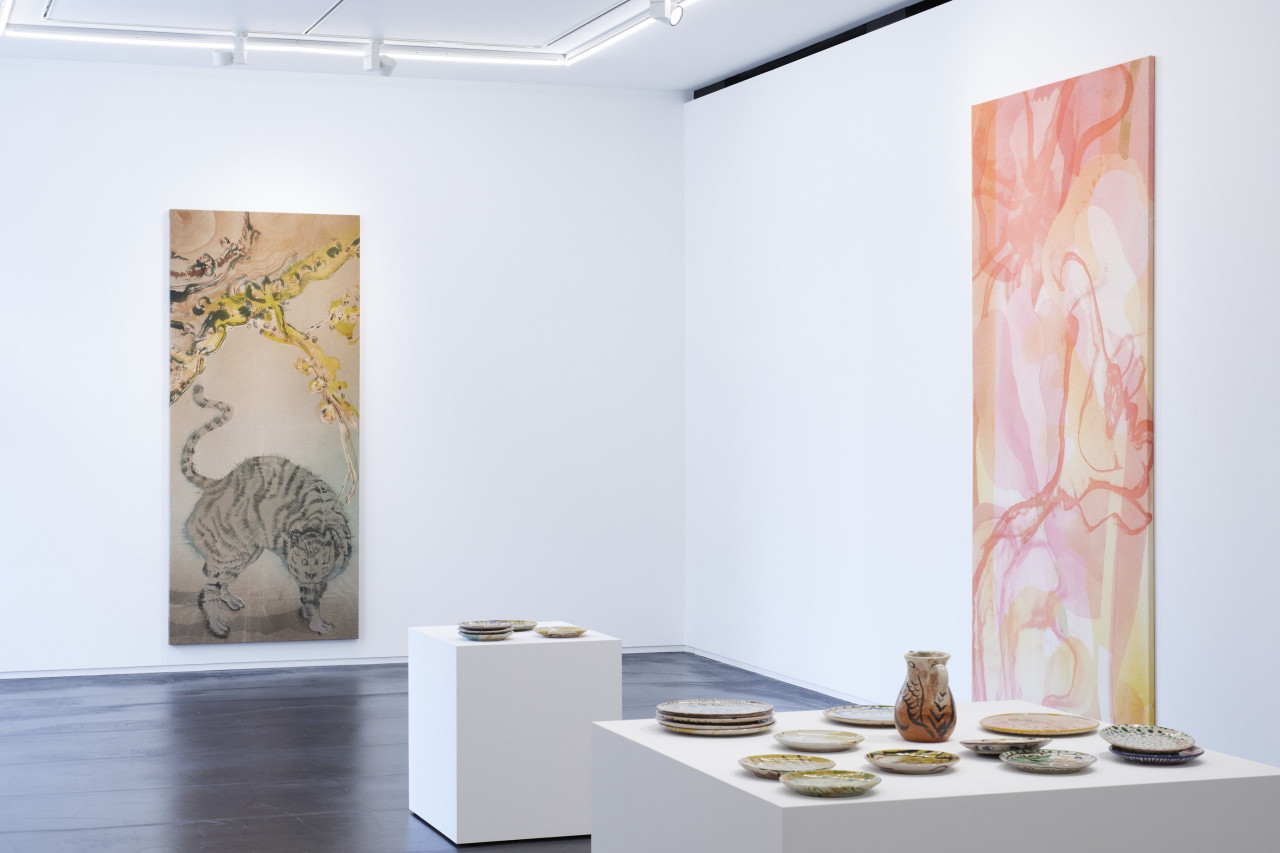 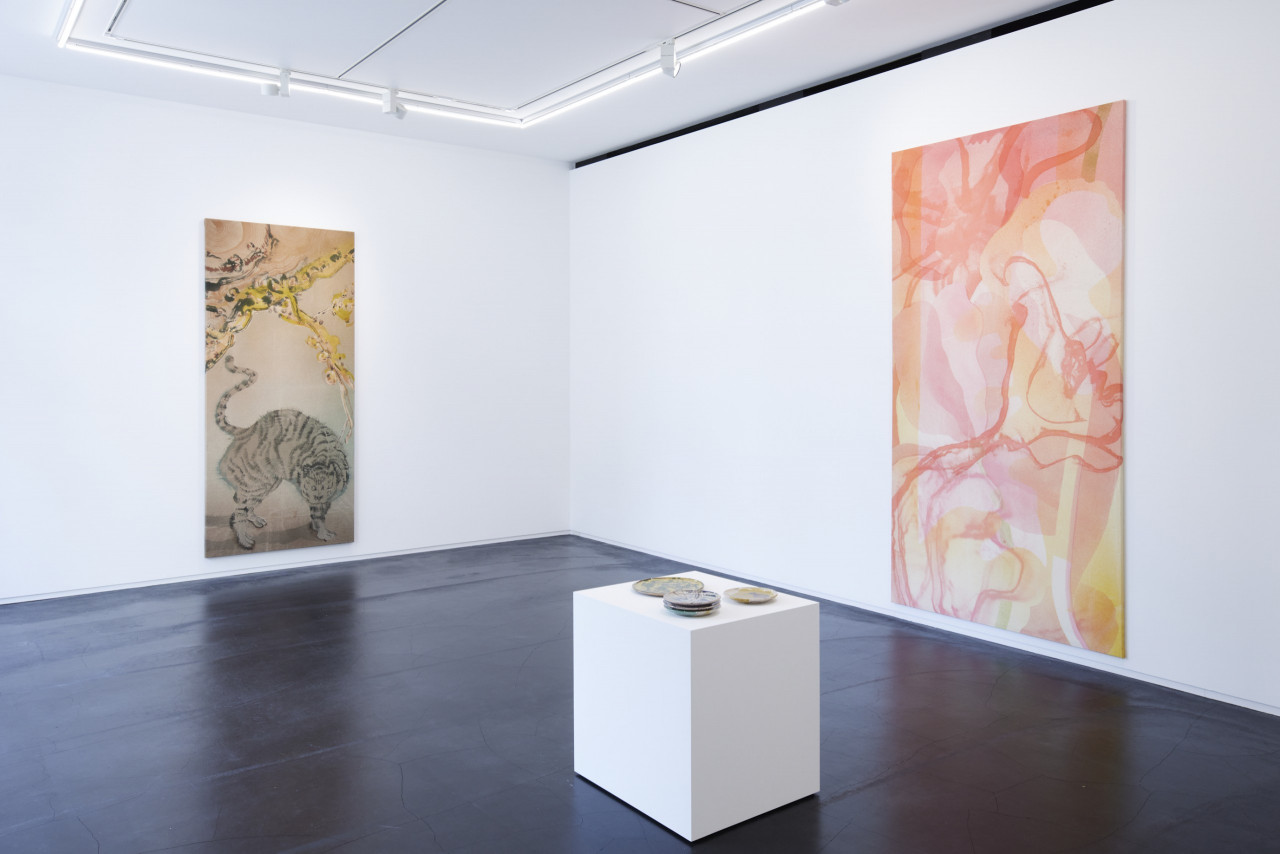 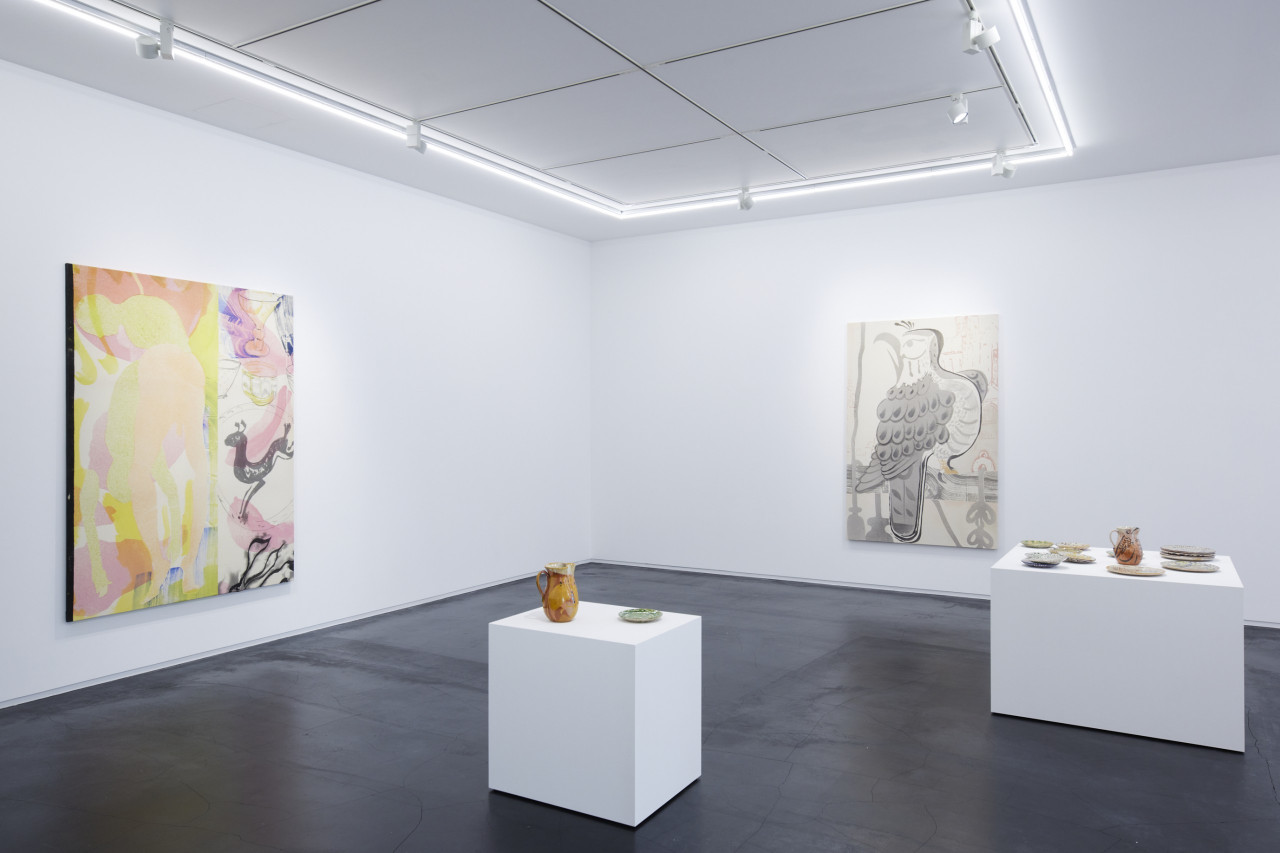 In addition to the ceramics, Matthew Lutz-Kinoy presents four paintings in the exhibition.

Lutz-Kinoy’s primary medium might be painting, but it often goes beyond two-dimensional space to extend to its surroundings, becoming decor or pieces of furniture. This expansion of the pictorial space is seen both in the choice of subjects and in the enlarged and repeated stylized motifs. His large format paintings, often installed like decorative tapestries, wall panels or suspended ceilings, stages the exhibition space in which viewers are physically immersed. While the lightness of Lutz-Kinoy’s works flirts with the decorative and moves away from a strong notion of style and “touch”, there is more of a connection to traditions marked by stylistic rules and a pre-established vocabulary: calligraphy, theatre, Japanese ceramics, the Rococo, and the stylized motifs of François Boucher, Jean Cocteau or Balthus.

The painting, “Love’s Work Dish in Raku after Leach and Yanagi” highlights this mixed vocabulary in which the right panel of the composition contains graphic enlarged drawings lifted from the ceramics of Bernard Leach, including a leaping deer and the head of a long eared rabbit. While the painting “City Falcon”, places a bird found in Japanese Otsu-e paintings on top of a New York skyline. An untitled work in floral blush calls towards the large format paintings which typically flank the walls of the two artists traveling dinner events. And creating another link to the influence of Buncheong ware on the artists current ceramic works, we see in “Tiger under a Pine Tree” a popular motif in Korean painting of the late 1600’s (late Joseon period).

A presentation of the “Keramikos” book published in December 2020 by Franz and Walter Koenig and edited by Nicolas Trembley accompanies the exhibition. 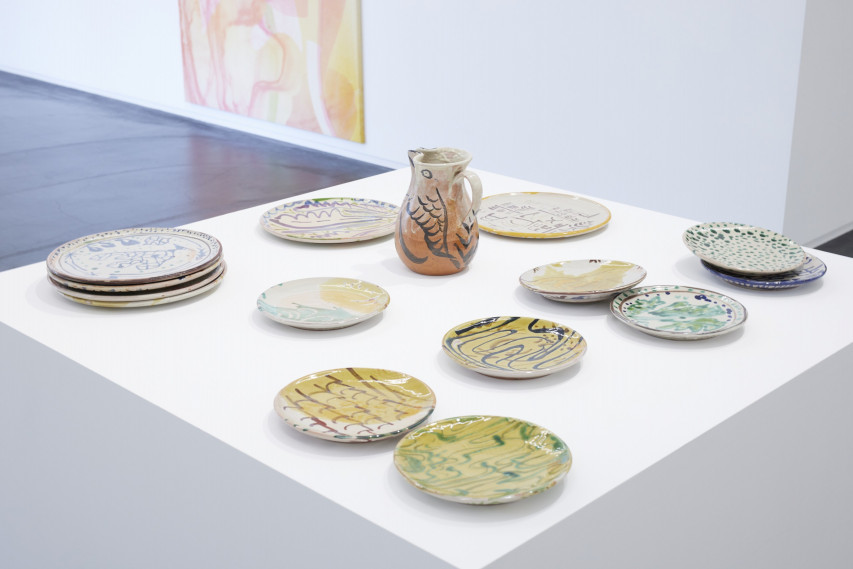 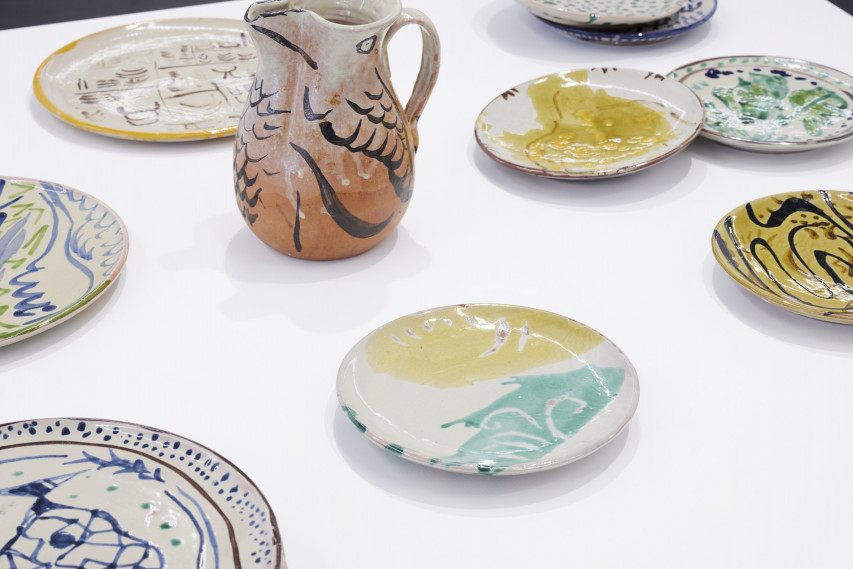 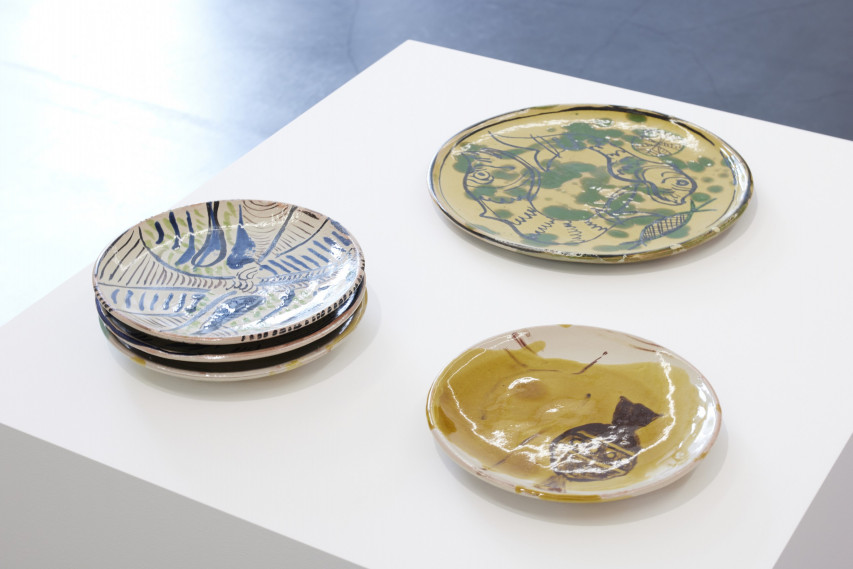