When You Leave, Walk Out Backwards, So I‘ll Think You‘re Walking In 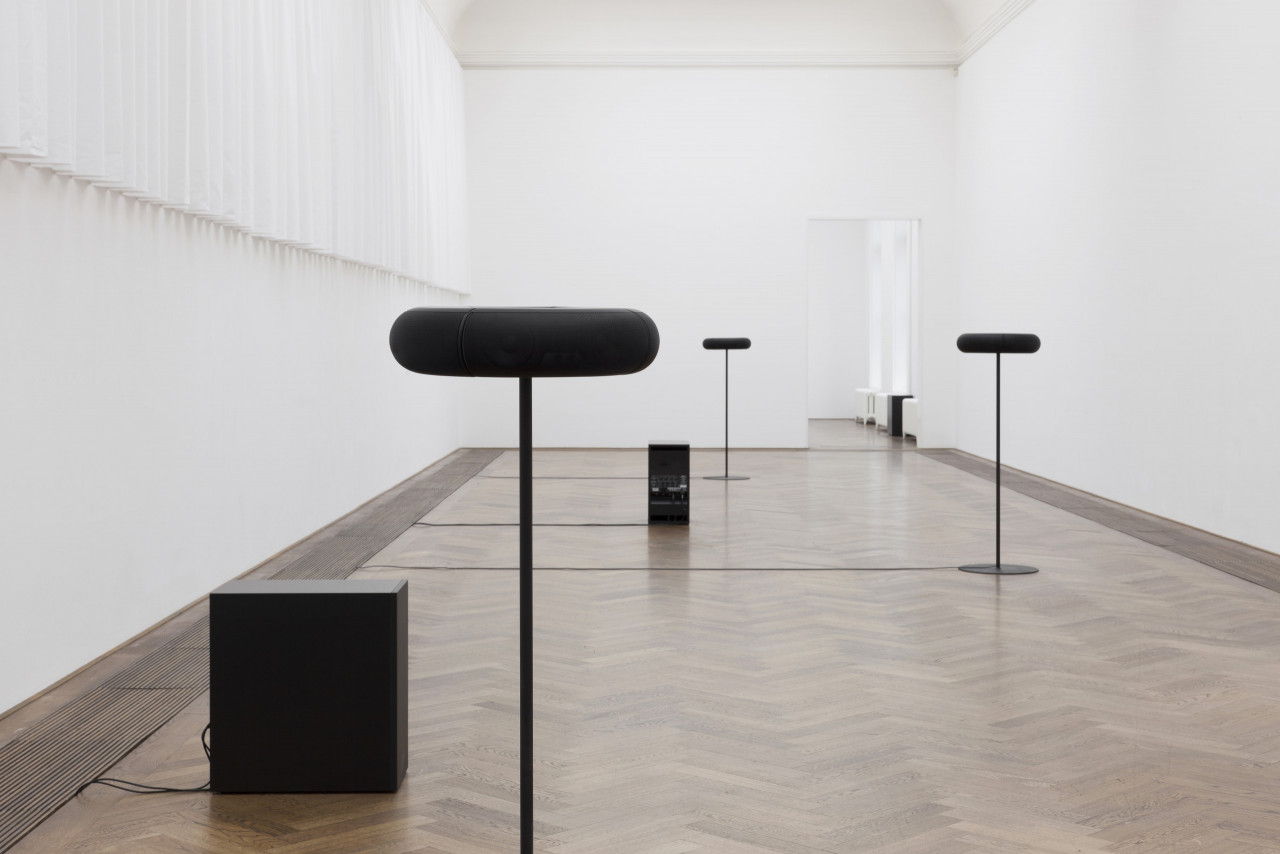 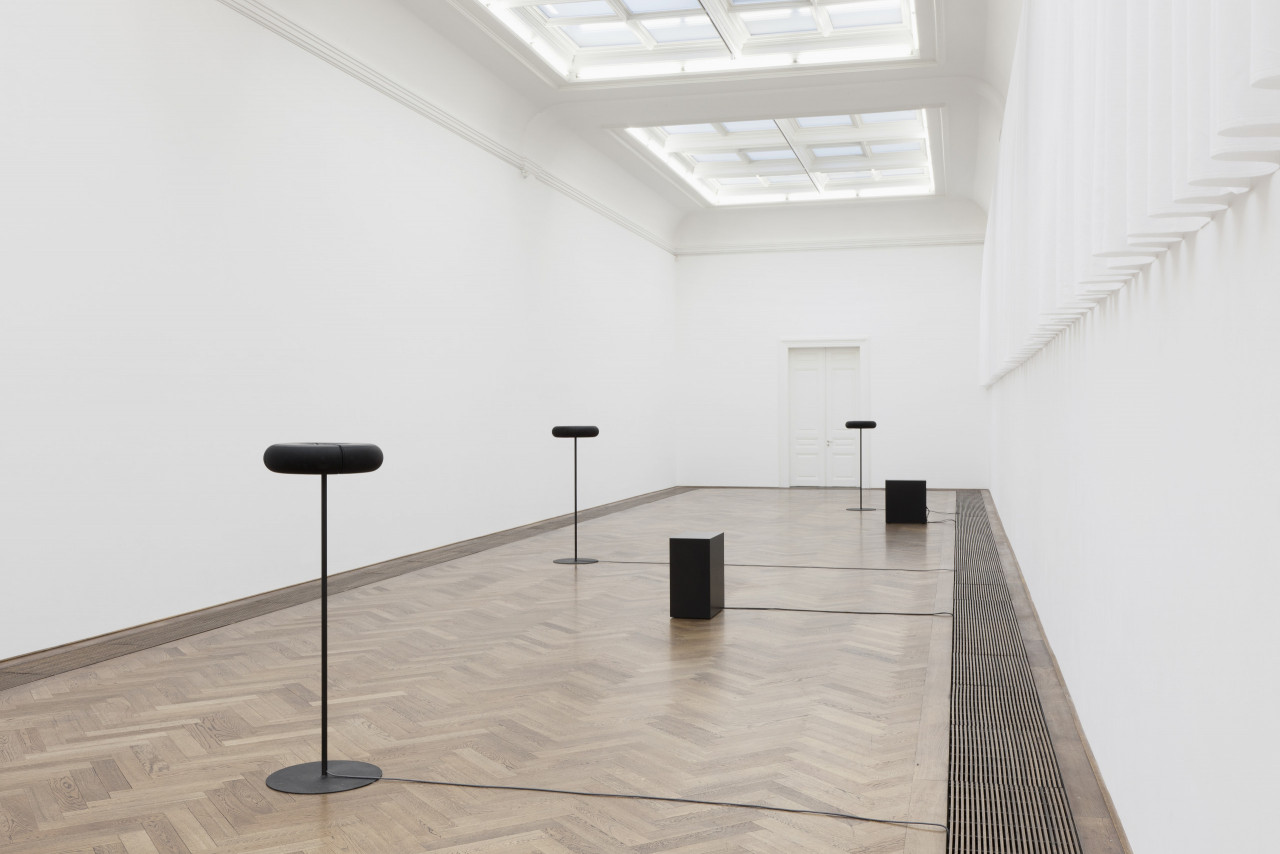 An essential mode of Weinberger’s artistic practice and production to date has been that of collaboration and participation. Her music and sound works were often included in exhibitions as live performances that took place during opening nights or special events. Thus, her pieces added another dimension to other artists’ works, and were occasionally also co-performed or co-produced by them. Each of Weinberger’s works engaged with a particular exhibition space and was the outcome of a collective endeavour. Weinberger employs different genres and transgresses the limits of youth subcultures that identify each with one particular genre and the corresponding look and lifestyle. The artist’s open-ended way of working challenges the role hierarchical processes play in contemporary art, and shifts the focus to the importance and presence of collective creativity in our time.

As a representative of the generation that has unlimited access to information and media, Weinberger situates her work in the production sector of music and sound performance. The availability of affordable technology puts the production – and instantaneous distribution – of highquality music or film within everyone’s reach. Consequently, the hierarchy of artistic production and distribution is transformed, as a single person can access all channels necessary to present a work to the mass audience. Online platforms such as YouTube are only one part of the machinery that enables the new generation to foster the distribution of films and music productions. The majority rules, and its ‘clicks’ alert major corporations to promote certain titles via their distribution networks. The discovery and selection of artistic works are therefore no longer only in the hands of a small number of individuals or of talent scouts. A pre-produced album compilation loses its importance, since the playlist changes constantly. Music becomes a data stream of sounds. New pieces of music received from friends via email complement purchased tracks, as do personally composed tracks and those downloaded from the Internet. 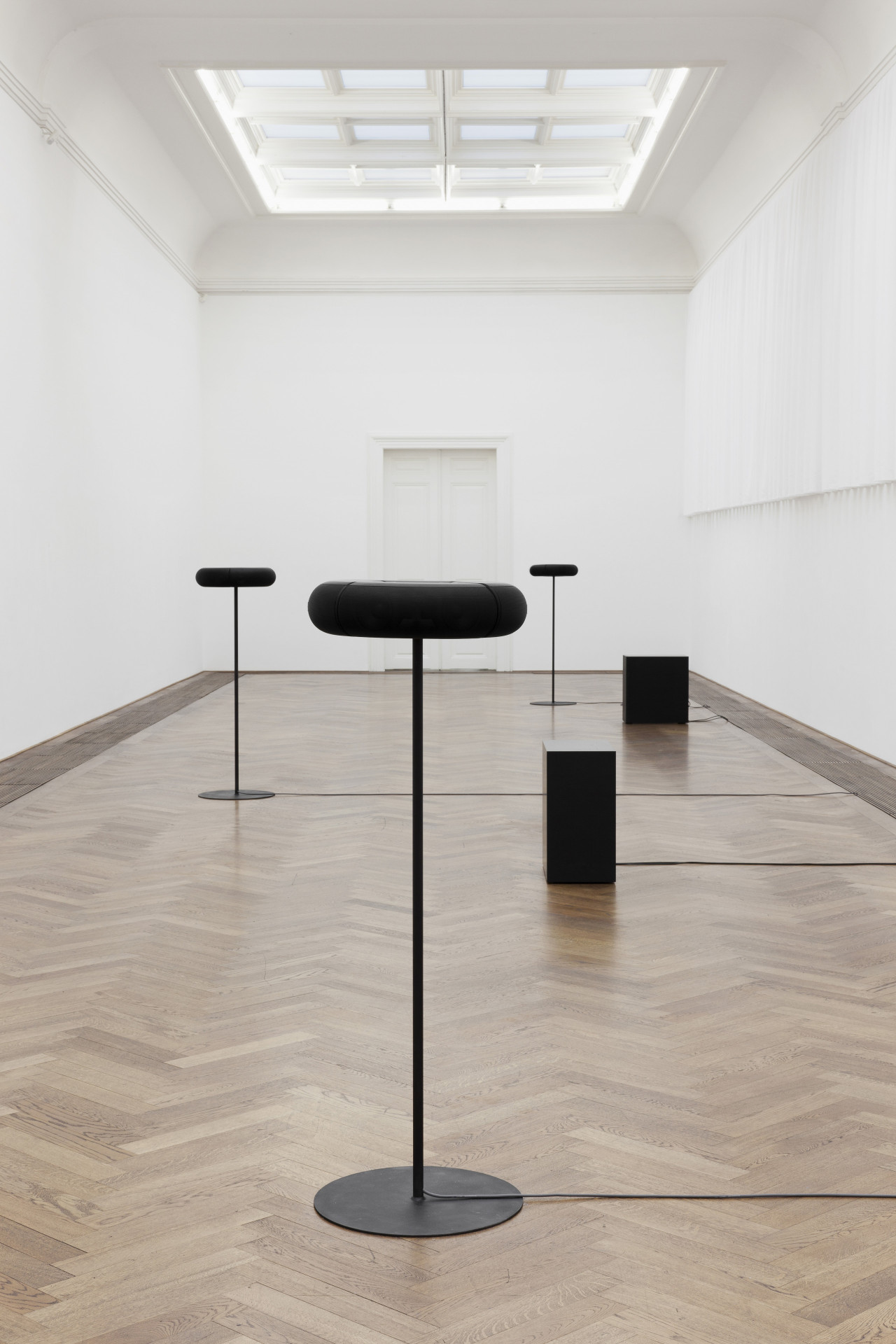 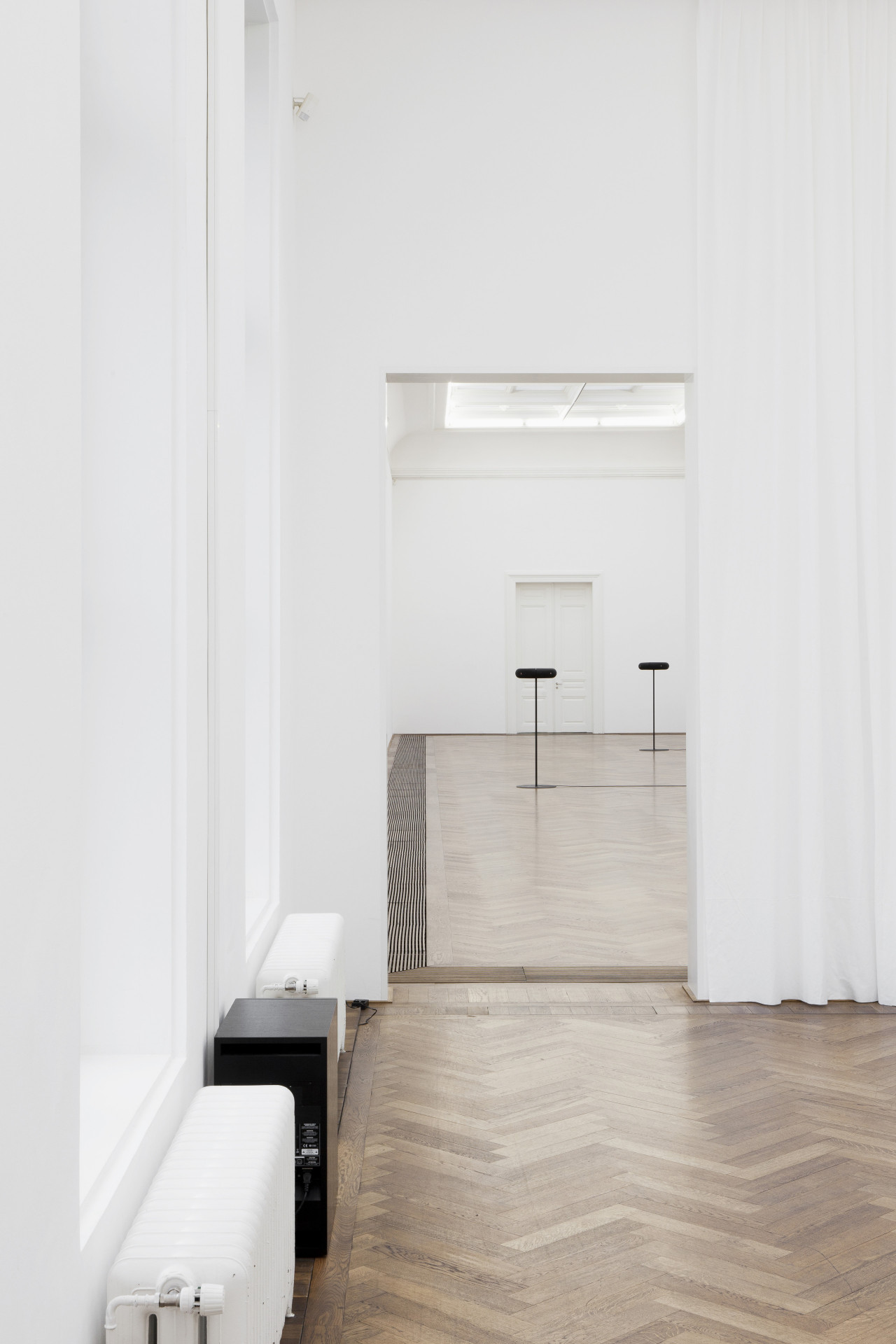 For Kunsthalle Basel, Weinberger has produced a site-specific sound installation. When You Leave, Walk Out Backwards, So I’ll Think You’re Walking In is the title of both the exhibition and the work. Music and sound fill the five ground floor galleries of Kunsthalle Basel. Their visual impact derives solely from the arrangement of loudspeakers while curtains installed alongside the walls assure the absorption of echoes. For the first time, Weinberger’s work, evinced solely by music and sound, stands for itself and relates to the layout of the galleries. The collective processes are not on display: Weinberger has produced twentytwo hours of sound for her exhibition. Eleven loops are played on the eleven channels the artist installed in the galleries and, given their varying lengths the result is a spatial layout of sound, constantly shifting through the exhibition spaces. The Grand Opening Soundtrack devised as an invitation to the opening offers a foretaste of the various loops in the show.

In the first gallery, three different loops are playing over three doughnut-shaped loudspeakers. Each loudspeaker generates a field of sound whose intensity increases the closer you get. Overlapping sounds reverberate between the loudspeakers and between the galleries. Directional loudspeakers in gallery 2 fill the space with another two loops while in the following room one encounters a more intimate atmosphere. Four loops in gallery 4 and one in the final room of the Kunsthalle both open up and close the circuit. The exhibition is not conceived like a record album that runs from beginning to end. Each of the rooms and each of the loops may be the beginning or the end of Weinberger’s work. It is the visitors of the show who determine how long they linger in a room, with a loop, or at a certain position between two or several loops. Hence, the visitors mix personal tracks and create a Weinberger work of their own. The loops are always composed in one timbre, in which major and minor keys harmonize. The basic form of each harmony develops into a body of sound and introduces the next harmony. This conveys a sense of calm underlying the overall composition or of an ingenuous interplay of different elements. The crux of the matter is not so much the development of a danceable beat like for example in electronic music. Instead, the various samples of presets including drum kits, percussion, basses, grand pianos, synths and strings, revolve around the idea of a universal composition. 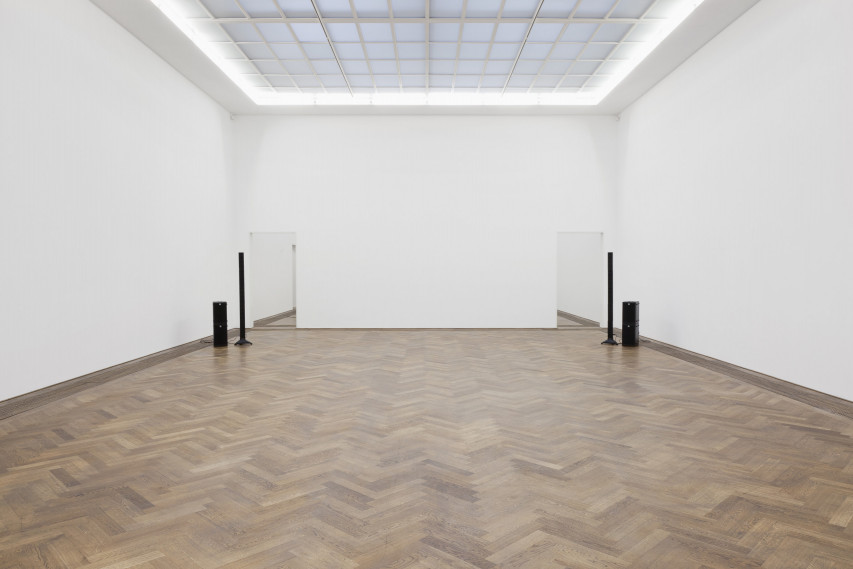 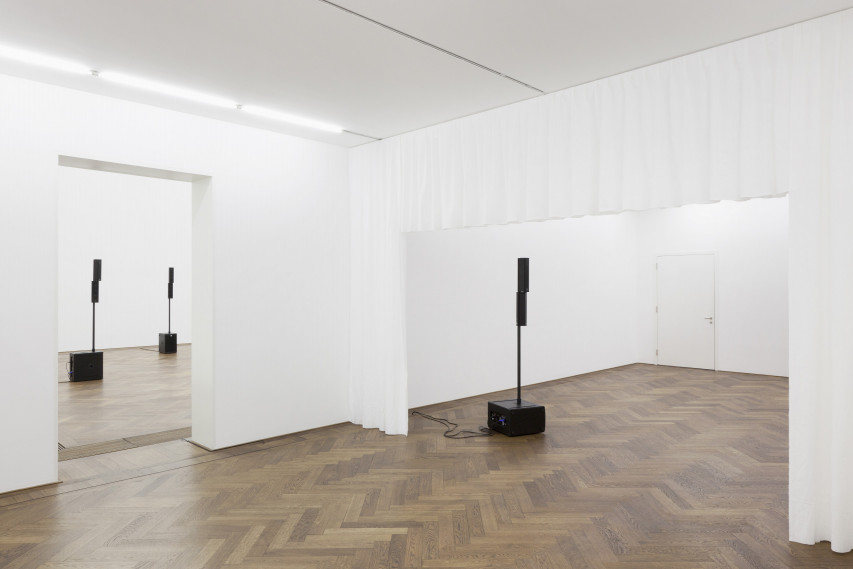 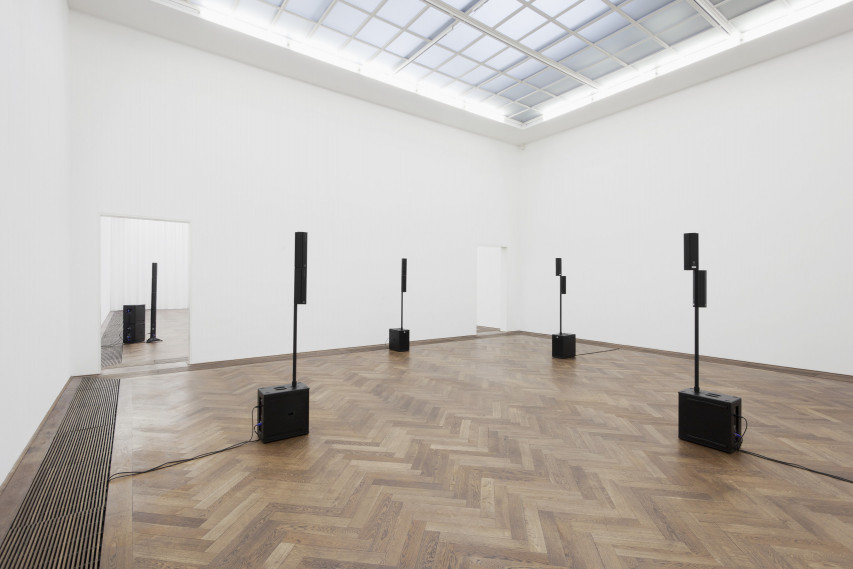 What remains at the end of the exhibition visit is augured in a poetic and melancholic manner by the title: When You Leave, Walk Out Backwards, So I’ll Think You’re Walking In. Each exhibition visitor is enveloped by the work, and walks away immersed in his or her own personal impressions. Musical elements such as playback, repetitions and overlaps play with perception. The limits of the exhibition space – that Hannah Weinberger merely uses as a minimal backdrop to sound – are thus transcended. The music of the exhibition is subconsciously retained and remains tangible in viewers’ bodies after they left.

The exhibition is generously supported by george foundation. 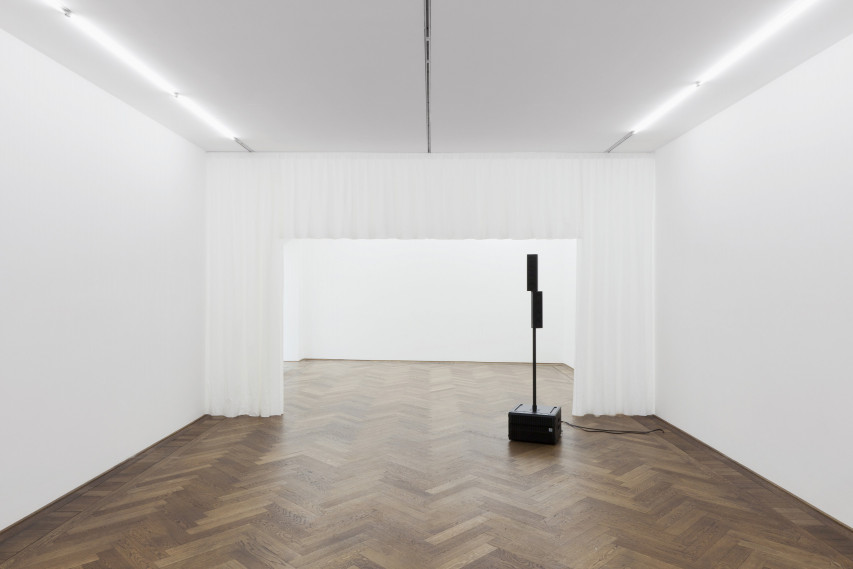 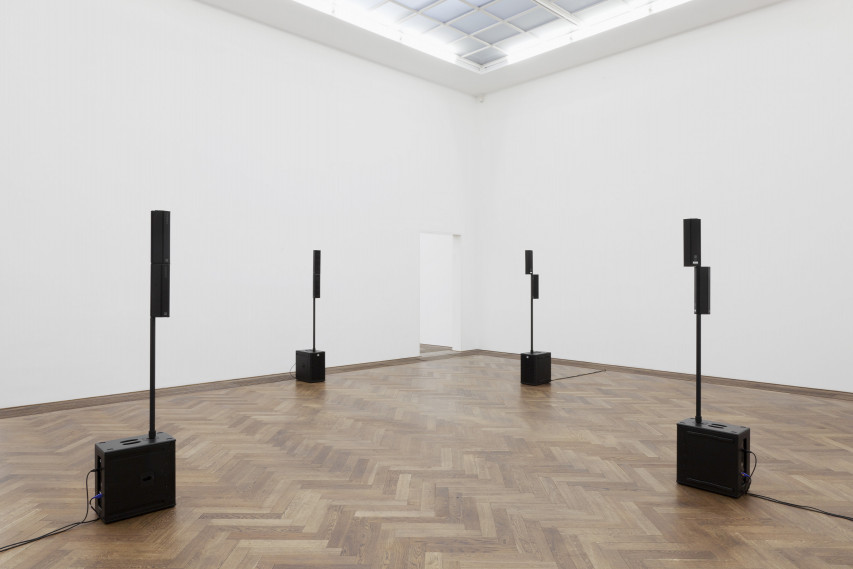 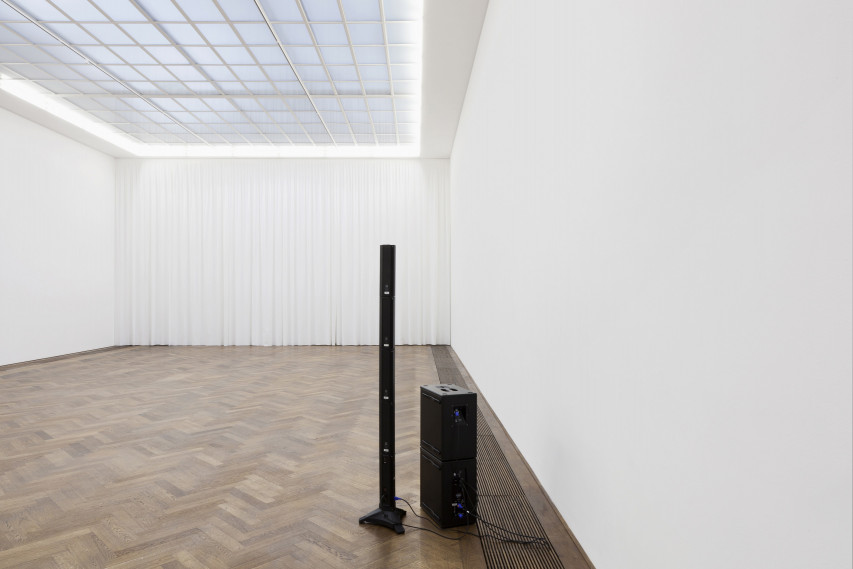