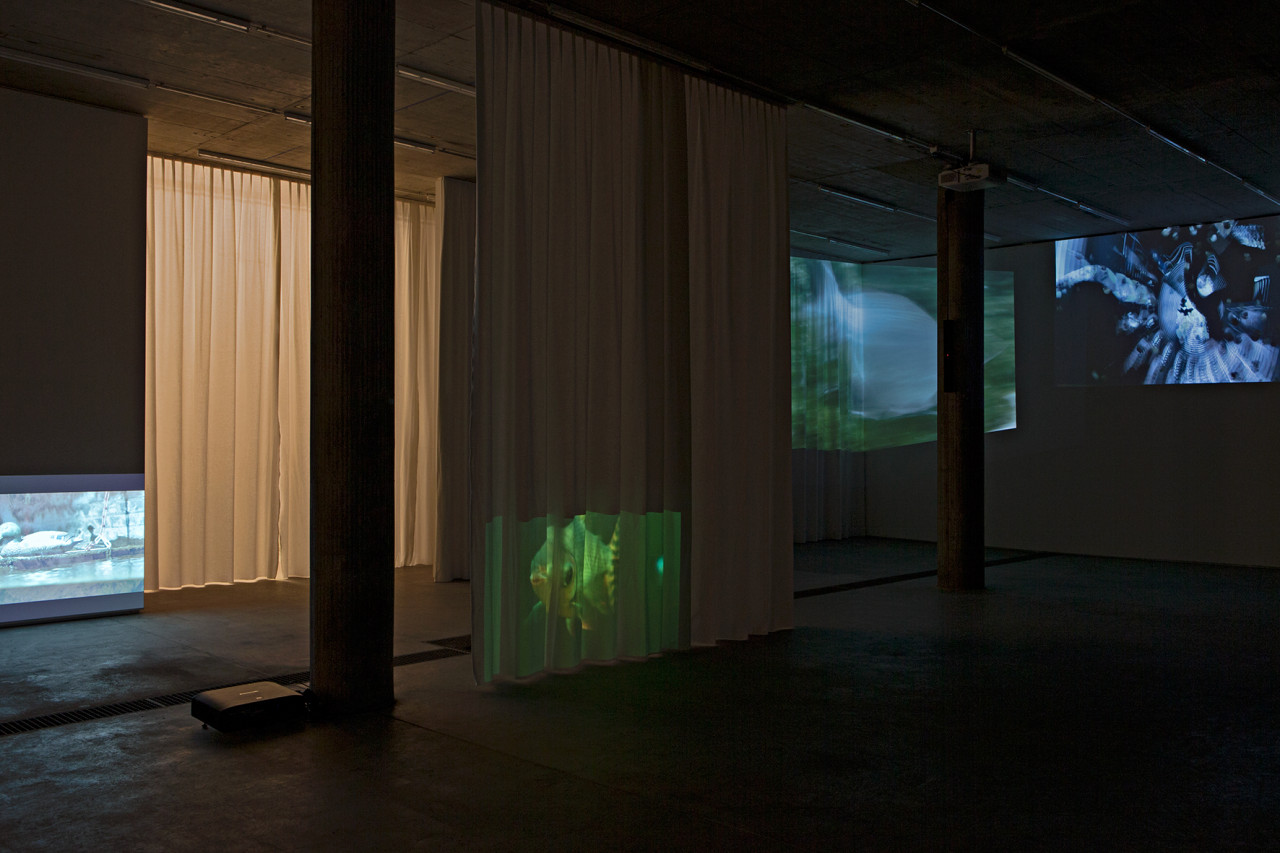 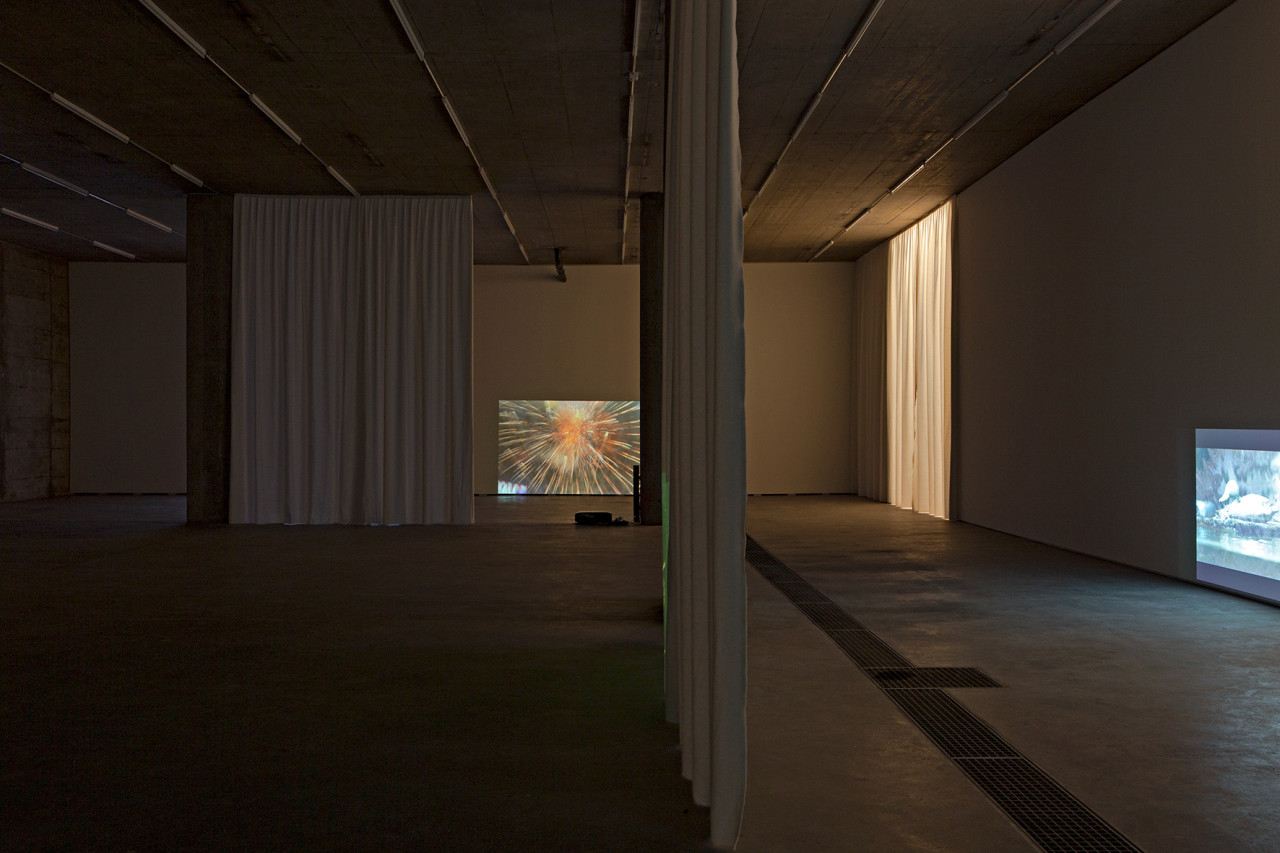 On seen by Hannah Weinberger is new body of works especially created for this exhibition and developed specifically for the location into a 16 channel video and audio installation. The many travels of the artist in the last months form the basis of the exhibited works and present fragmented, fugitive impressions and observations of places, people and everyday occurences.

Formal aspects such as tempo and rhythm of projections and sound draw a line to questions of mecha- nisms and rituals of memory and timelines with regards to contents on one hand, but also emphasize the conditions of medias and representations in a fast alternating reality on the other. What are the substructures of memory and through which imagery and sounds do they in inscribe themselves into today’s diversified cultural canons? Which relevance do we ascribe to our sensual experiences as a parameter for our present and/ or even our future?

In Weinberger’s complex installation imagery and sound are compiled in layers, deconstructed into cadenced sequences and looped. Technical conditions such as the camera’s calculative auto correc- tions on movements are included as formal elements. Visual material created by filming of moving images found in (semi-) private spaces such as flatscreens in an electronic store or LED displays of travel destinations furthermore discuss the general confrontation with imagery and it’s suggestive social signification, e.g. as mediators of values such as happiness and love, existential questions of identity and consumerist needs. 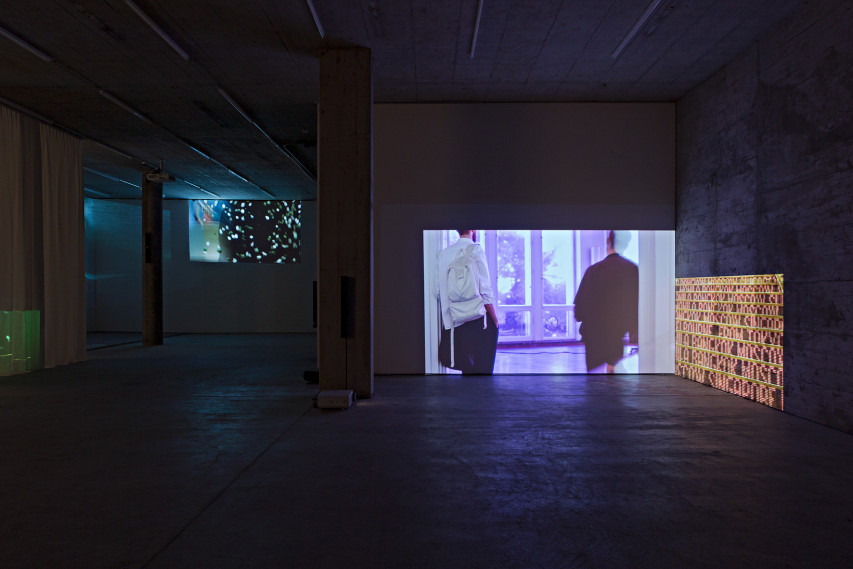 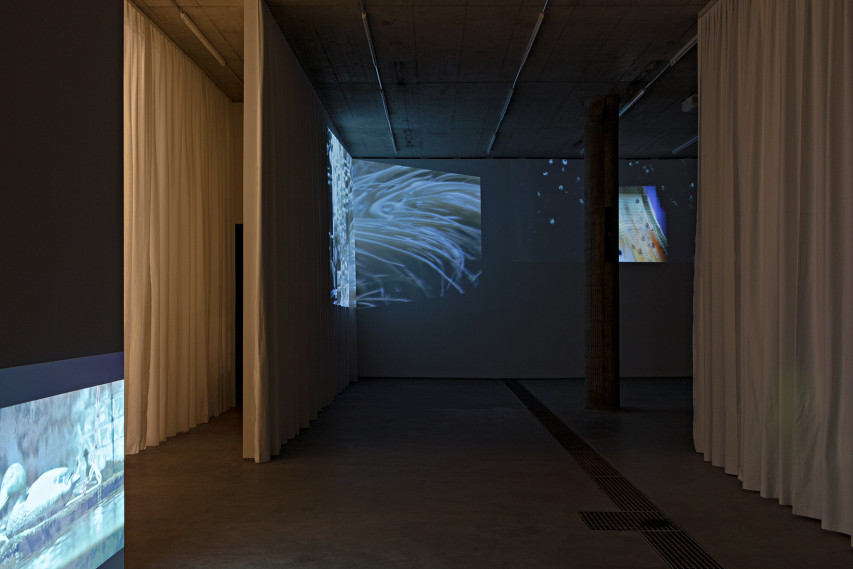 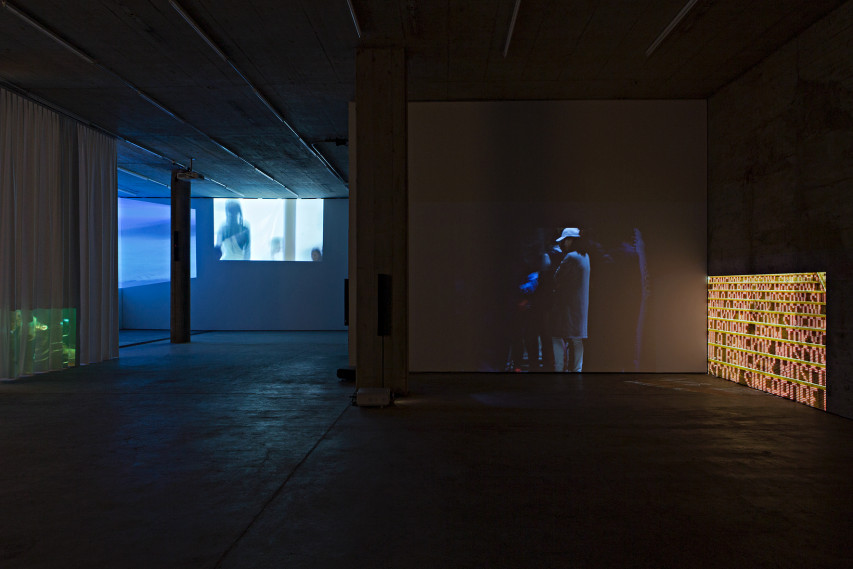 Doing so, a tension- generating narration of associatively composed but autonomous elements is achieved, that complete or even compete and yet meet to an almost symphonic overall impression. Re- corded images of urban, mainly architectural situations meet those of animals and supposed nature, a perspective focus on details of images show groups of people in at times mysterious interaction. However it is the movement captured in many images of machines, people, animals and most common things that generate the overall rhythmicity that is repeated in their edit and details and is to be found again also in the audio elements.

Audio tracks that have been composed for each source of images individually apply both original fragments of the portrayed situations as well as spoken language, rhythmic sounds and music or also recordings of noises, such as made by people moving. For example, Weinberger amplifies and dupli- cates the metallic sound of steps on the spiral staircase on which visitors access the exhibition space, by using both the recording of it as an audio track and juxtaposing that with the actual, so to say „live“ sound the moment someone uses the real stairs. Crucial component of the audio works are also their precise adjustment to the space by exact placing of speakers on various levels of space and volumes that emphasize on aspects such as echo or again the sounds of visitors moving in space.

Such a precise examination of the each time very specific acoustics of an exhibition spaces also forms the basis of the third, almost stage-like element in the show. The white panels of textile hung down
the entire height of the space on one hand support the required acoustic conditions. At the same time though, they also generate a choreography, define perspectives and movement and even become back- drop of projections themselves. The white curtains open and close, expand and reduce architectural elements such as walls and passages but also create a third, flowing surface in addition to the raw concrete and clean sheetrock walls.

Hannah Weinberger’s On seen is an utterly elegant investigation on the conditions of imagery, sound and movement and their relations to mechanisms of memory and time- both technically precise as well as lost in reverie in it’s generous structure.

The overall impression of fugitiveness and poetry is furthermore enhanced through the visual repre- sentations of often transparent, often gleaming things, be it recordings of water and its inhabitants, but also fire works, plays of lights or soap bubbles. However, she at the same time achieves to not linger over melancholia or irony due to the rhythm and movement that hold together all elements and portray the pulsing synchrony and beauty as such that exists incessantly in and around us, that thrills us and binds us to life. 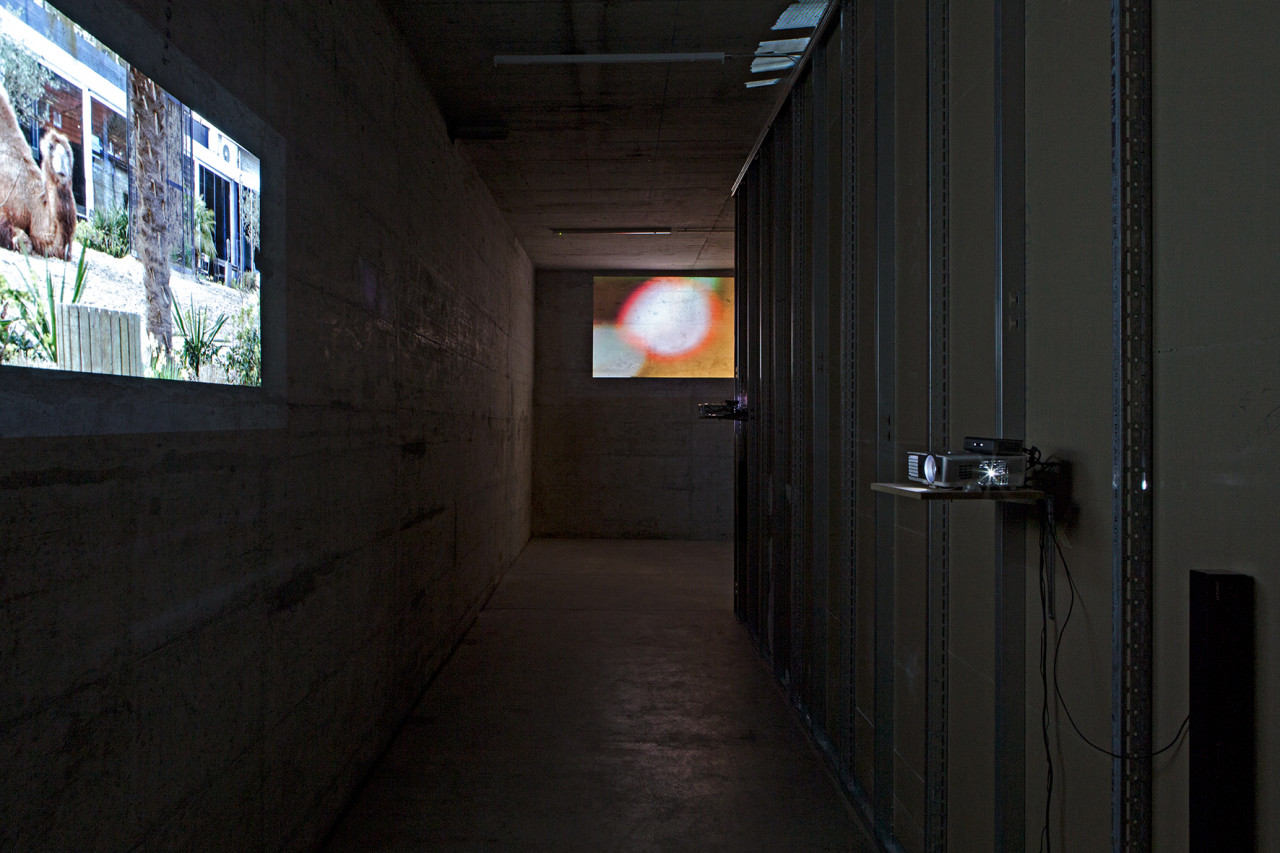 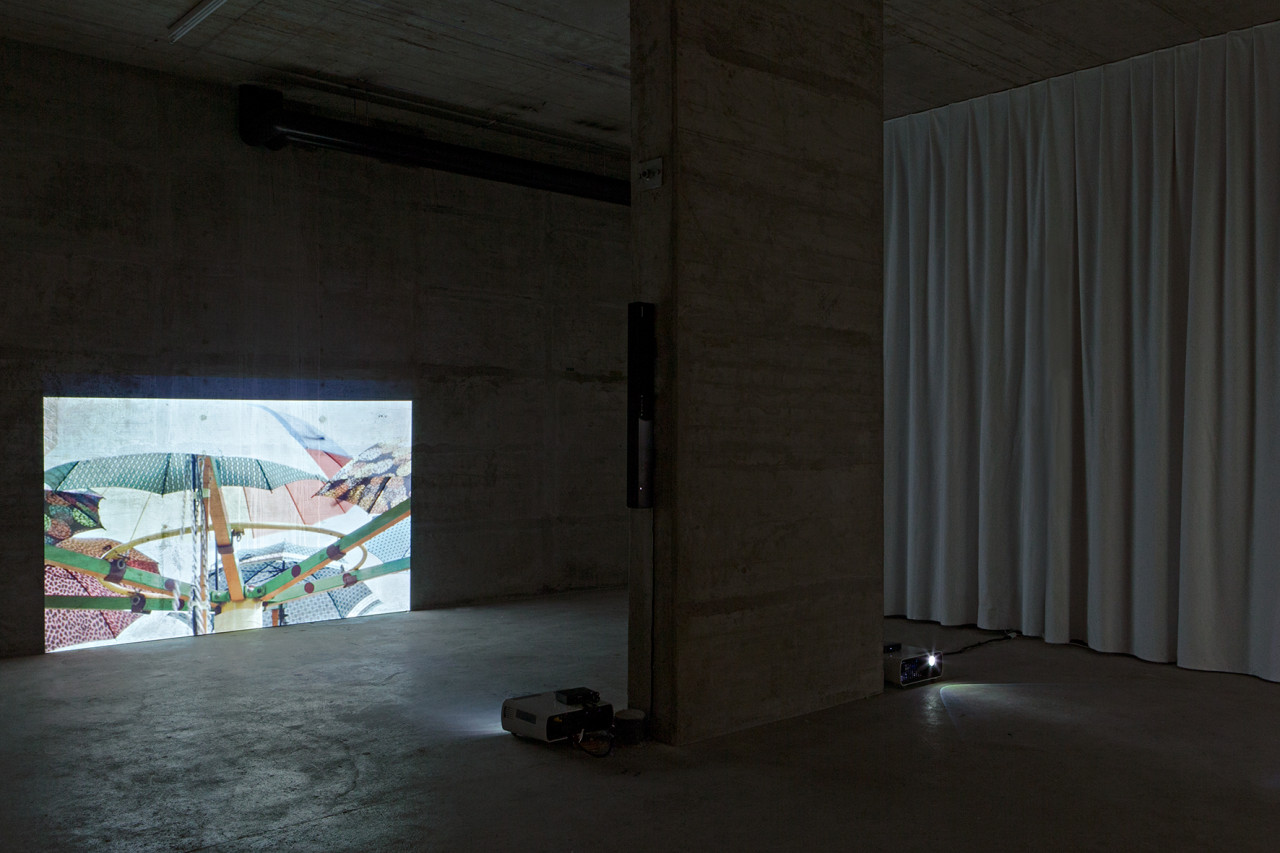